It has been known for 40 years that eukaryotic mRNA molecules contain a region of up to 250 adenine residues at the 3’ end. This poly(A) tail mediates mRNA nuclear export, translation, and protection from degradation in the cytoplasm. mRNAs synthesized by RNA polymerase (RNAP) II are immediately polyadenylated by poly(A) polymerase (PAP). During transcription, the cleavage and polyadenylation specificity factor (CPSF) composed of many polypeptides binds the RNAP II. After recognizing the polyadenylation signal (AAUAAA), the complex cleaves the pre-mRNA 10-30 nt downstream of it, and PAP synthesizes poly(A) from the resulting 3’ end. 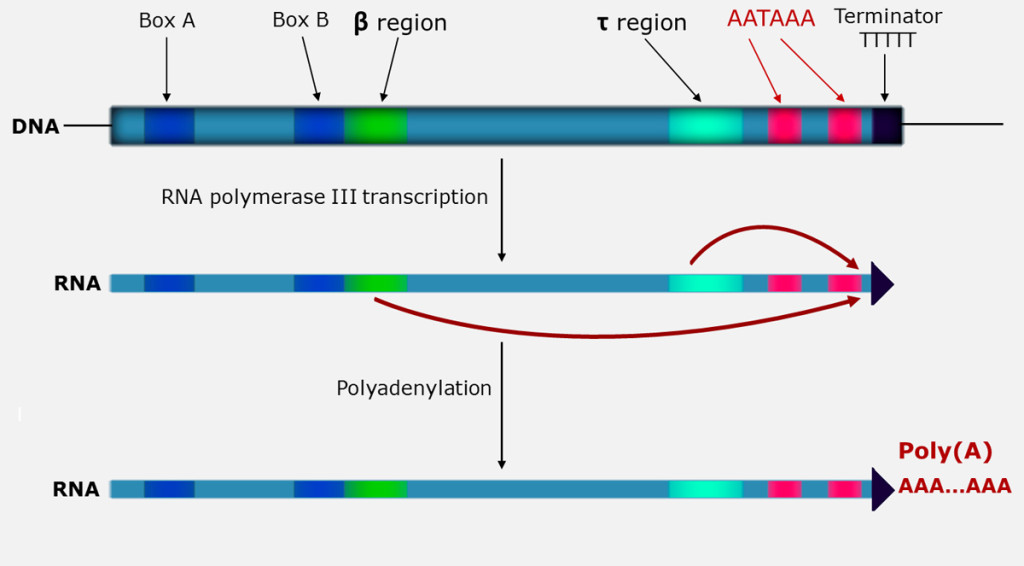 In contrast to RNAP II, RNAP III transcribes short RNA genes such as tRNA, 5S rRNA, Y, U6, 7SL, 7SK RNA etc. Neither of these RNAs has a poly(A) tail. The inability of RNAP III transcripts to be polyadenylated is not surprising. All these RNAs lack the AAUAAA signal, and RNAP III has no CPSF-binding domain. In addition, the mechanisms of transcription termination are quite different for RNAP II and III. However, we have found a set of DNA sequences transcribed by RNAP III whose transcripts can be polyadenylated. These are certain Short Interspersed Elements (SINEs); the bulk of SINEs have the length from 150 to 300 bp; up to a million of their copies are interspersed in the genomes of most multicellular eukaryotes. SINE species are limited to taxa of different ranks from genus to type. We have noted that certain SINEs from placental mammals have one to four AATAAA hexamers as well as a stretch of five or more T residues, which can serve as a transcription terminator for RNAP III (Fig. 1). The transcription of these SINEs (as well as most other ones) is initiated at the RNAP III promoter composed of two boxes (A and B) and terminated at the T-stretch (Fig. 1). We have shown polyadenylation of newly synthesized RNA for eight SINE species extending it by 100-250 nt. Similar to mRNA, this process requires the polyadenylation signal: T to C substitution in ААТААА blocked poly(A) synthesis at the 3’ ends of SINE RNAs transcribed by RNAP III. A more detailed analysis of three SINEs (mouse B2, jerboa DIP, and bat VES) exposed two more regions critical for the transcript polyadenylation. The beta region is located immediately downstream of the promoter box B, and the tau region is upstream of the locus with polyadenylation signals (Fig. 1). In a number of SINEs including DIP and VES, the tau region is composed almost exclusively of T and C residues. A deletion or substitution of one of these regions decreases the polyadenylation efficiency, and polyadenylation is blocked without both of them. One can propose protein complexes associated with the beta and tau regions that activate the polyadenylation machinery on the AAUAAA hexamer. Considering that all these mammalian SINEs have independent origin, the polyadenylation competence of SINEs likely emerged via parallel evolution. In conclusion, the presence of poly(A) at the end of SINE transcripts increases the lifespan of these RNAs and favors their reverse transcription, which gives rise to new genomic copies of SINEs.