Changes in 3-dimentional chromatin structure as a mean to relieve oxidative stress?

DNA in our cells is packaged into a structure called chromatin, which is mainly a protein-DNA complex. Chromatin needs to be loosened for fundamental processes to take place, such as decoding genetic information (i.e. gene expression) and the repair of DNA lesions. ATP-dependent chromatin remodelers are molecular engines that use ATP as energy to regulate chromatin structure, playing essential roles in cell viability, growth, and development.

Cockayne syndrome protein B (CSB) is an ATP-dependent chromatin remodeler that plays critical roles in DNA repair and gene expression. CSB mutations account for the majority of Cockayne syndrome cases, a devastating disorder characterized by neurological and developmental defects, severe sun sensitivity, and features of premature aging. Importantly, CSB is required for the relief of oxidative stress, which is due to an accumulation of reactive oxygen species and results in cellular damage. Oxidative stress is strongly implicated in the aging process and a variety of diseases, including neurodegenerative diseases and cancer. However, how CSB relieves oxidative stress is unknown. 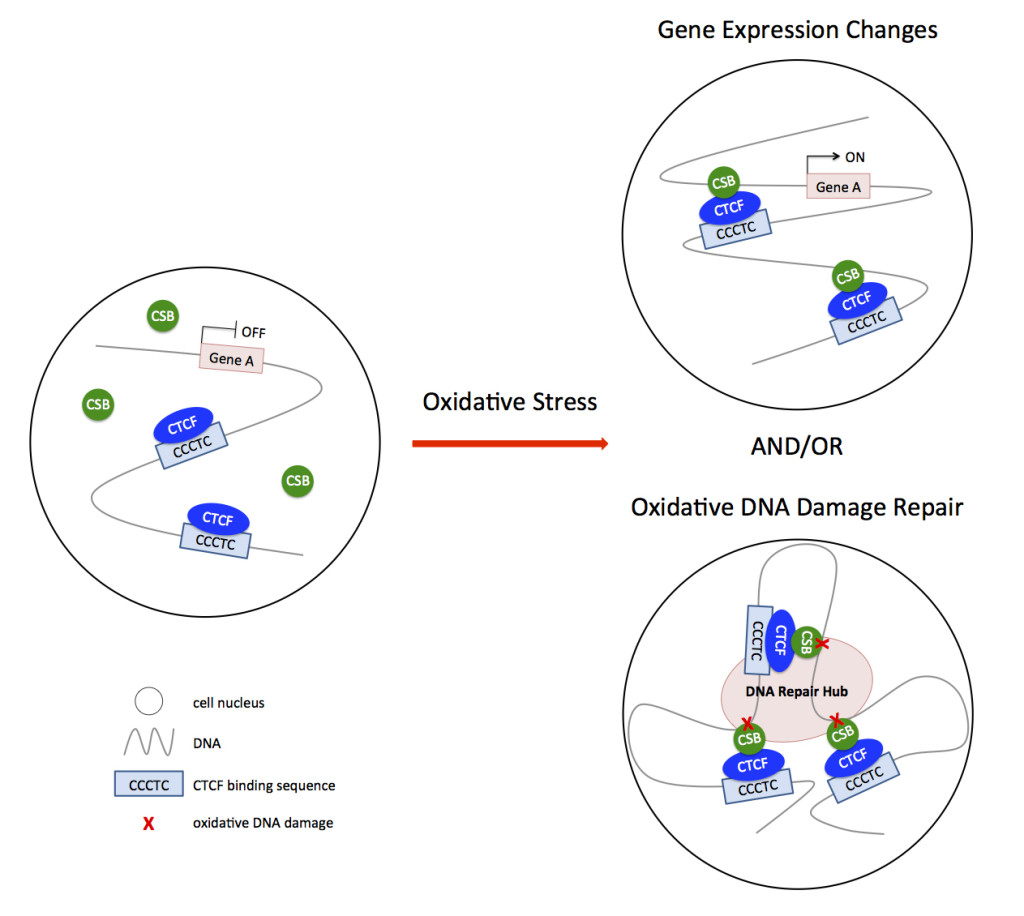 Fig.1. Potential functions of the CSB-CTCF interaction in response to oxidative stress. Shown are cell nuclei under non-stress conditions (left) and following oxidative stress (right). Under non-stress conditions, the majority of CSB molecules are not stably associated with DNA. CTCF recognizes and binds to a specific DNA sequence (CCCTC). Following oxidative stress, CSB and CTCF directly interact and regulate each other’s association with DNA. The function of this interaction may be to form chromatin loops that allow the cells to regulate gene expression, for example turning on a gene that was previously silenced (top) or create a chromatin hub for the repair or oxidative DNA lesions (bottom), ultimately resulting in the relief of oxidative stress.

To decipher how CSB relieves oxidative stress, we first determined the places on DNA where CSB binds in response to oxidative stress. “Chromatin immunoprecipitation followed by DNA sequencing” is a powerful tool to map where on DNA a protein of interest is bound. Using this tool, we discovered increased CSB occupancy at gene promoters, which are regions of DNA that initiate gene expression. We also found that CSB localized to several interesting gene classes, such as those controlling gene expression and metabolism. Interestingly, we also found that CSB is specifically enriched at DNA regions containing the binding site for the CTCF protein. CTCF plays a key role in regulating the 3-dimentional organization of DNA, forming long-range chromatin interactions to regulate gene expression.   This finding suggested that CTCF might regulate the association of CSB with DNA upon oxidative stress.

To address whether CTCF is involved in targeting CSB to specific DNA regions during oxidative stress, we compared the sites that CSB occupies in cells with reduced CTCF levels to cells with normal CTCF levels. We found that CTCF does, indeed, regulate the association of CSB with DNA. Strikingly, we also found that CSB can regulate CTCF’s localization. Together, these findings suggested that CSB might interact with CTCF. To test this, we used an antibody that specifically recognizes CTCF to isolate CTCF and any other proteins with which it interacts. Excitingly, we found that CSB and CTCF are in a complex in cells. Moreover, we also found that this interaction is enhanced by oxidative stress. Together these findings demonstrate that CSB and CTCF regulate each other’s interaction with DNA in response to oxidative stress.

We next determined if we could recapitulate these findings in a biochemically-reconstituted system by purifying these proteins separately and mixing them in a test tube.  We found that not only do the CSB and CTCF proteins directly interact but also that CSB enhances CTCF’s affinity for DNA.  These results further strengthened our cell-based observations.

In summary, this study demonstrated a novel interaction between the ATP-dependent chromatin remodeler CSB and the major DNA architectural protein CTCF. Our findings suggest an exciting new hypothesis that CSB and CTCF might work together to relieve cells from oxidative stress by reorganizing long-range chromatin structure. These dynamic changes in DNA architecture could result in gene expression changes that allow the cell to successfully respond to oxidative stress, or create an organization center for efficient repair of oxidative DNA lesions (Fig. 1). This work provides a strong foundation upon which to build an understanding of how oxidative stress can be relieved through chromatin structure reorganization.