What did we know about GPR101 until a couple of years ago? Very little. The human gene was discovered in 2001, found to be located on chromosome X, and predicted to encode a seven-transmembrane receptor. In the following years the research was concentrated mainly on the investigation of the rodent GPR101 counterpart, showing a predominant expression in the brain and a link to the cyclic AMP signaling pathway. It was not until 2014 that a putative ligand was discovered and the first human patients affected by infant-onset gigantism reported to harbor GPR101 duplications. This disease, that we called X-linked acrogigantism (X-LAG), affects the tallest people on earth and is caused by an excessive secretion of growth hormone originating from tumors of the pituitary gland. 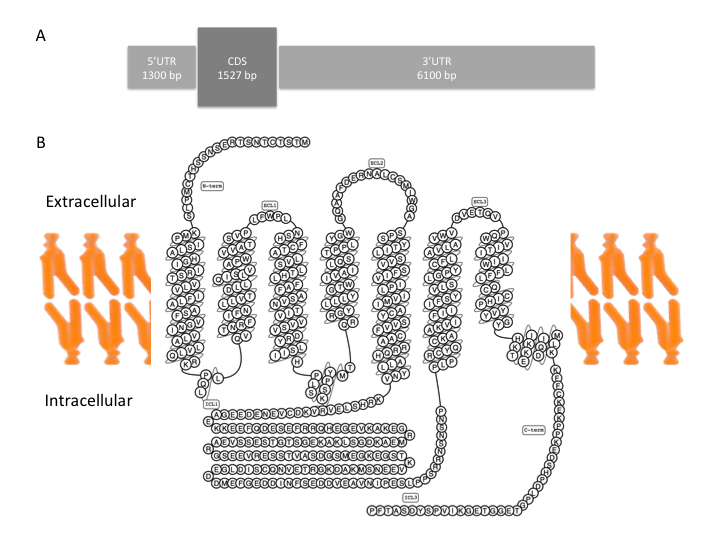 Fig. 1. Schematic structure of the human GPR101 gene (isoform 1, panel A) and protein (panel B, adapted from gpcrdb.org)

In this study we employed bioinformatic analyses to study the promoter region and molecular biology techniques in cell lines and patients’ tissues to determine the complete structure of the human GPR101 gene. We found that the most important sites controlling GPR101 expression are located within 1000 base pairs (bp) upstream of the transcription start site. This region has a high content in GC nucleotides, a characteristic that allows fine-tuning of gene transcription. This property may be particularly advantageous in key organs such as the brain.

We then identified in vitro the regions that are transcribed into the messenger RNA but not present in the protein, the so-called untranslated regions (UTRs). UTRs are located both upstream (5’UTR) and downstream (3’UTR) the sequence coding for amino acids (CDS). We found four different GPR101 transcripts, which result from alternative splicing at the 5’UTR. All transcripts share a common, and exceptionally long (about 6000 bp), 3’UTR. Expression studies showed that isoform 1 is predominant in the human pituitary and the main contributor to the high GPR101 expression observed in the pituitary tumors of X-LAG patients.

Future studies focused on the promoter and 3’UTR regions will be necessary for a complete understanding of how GPR101 expression is regulated under normal and pathological (e.g. X-LAG) conditions.

We then characterized GPR101 expression in human, rhesus monkey, rat, and zebrafish tissues. We confirmed that the brain is the organ with the highest GPR101 expression across species, a result that suggests a conservation of function throughout evolution. However, we also observed species- and development-specific expression patterns.

In humans, the highest expression was found in the nucleus accumbens, a region in the brain that plays an important role as the reward center. Interestingly, about a quarter of X-LAG patients showed increased food seeking, a behavior that might be controlled by GPR101. In the normal pituitary gland GPR101 was expressed mainly during fetal development and the adolescent growth spurt, the two phases in human life characterized by the highest rate of growth in length and weight. Low expression was observed in the adult pituitary gland, suggesting that the main physiological role of GPR101 might have already been completed. On the contrary, several GPR101-positive cells were detected in the pituitary gland of adult monkeys and rats, although in different cell types.

Altogether these expression studies outline how complex the regulation of GPR101 expression is: exquisitely timed, spatially confined, as well as diversified among species. These intriguing findings probably reflect the different modalities by which GPR101 controls growth in diverse species.

This study represented the first step towards a better understanding of GPR101 physiology. Elucidating the structure of the gene and the resulting protein, how GPR101 is regulated and consequently expressed, and finding molecules that can shut down GPR101 activity, are indeed necessary actions that we need to undertake to develop efficacious treatments to cure patients with gigantism.