Chiari malformations and syringohydromyelia in children

More than 100 years ago, Hans Chiari, an Austrian pathologist, described different types of morphological abnormalities of the posterior fossa, the small space in the lower part of the skull just above the spinal canal. The brainstem and cerebellum are located within the posterior fossa. The brainstem is responsible for controlling multiple vital body functions like e.g. breathing, blood pressure, and temperature. The cerebellum controls movement, balance, and coordination. In addition, the cerebellum appears to be essential for many neurocognitive and behavioral functions. Chiari described posterior fossa abnormalities that were characterized by downward displacement of parts of the cerebellum into the spinal canal. Several Chiari malformations are nowadays recognized. Despite similarities in their names, Chiari I and Chiari II abnormalities are different abnormalities with varying causes, presentations, diagnostic criteria, management, and prognosis. 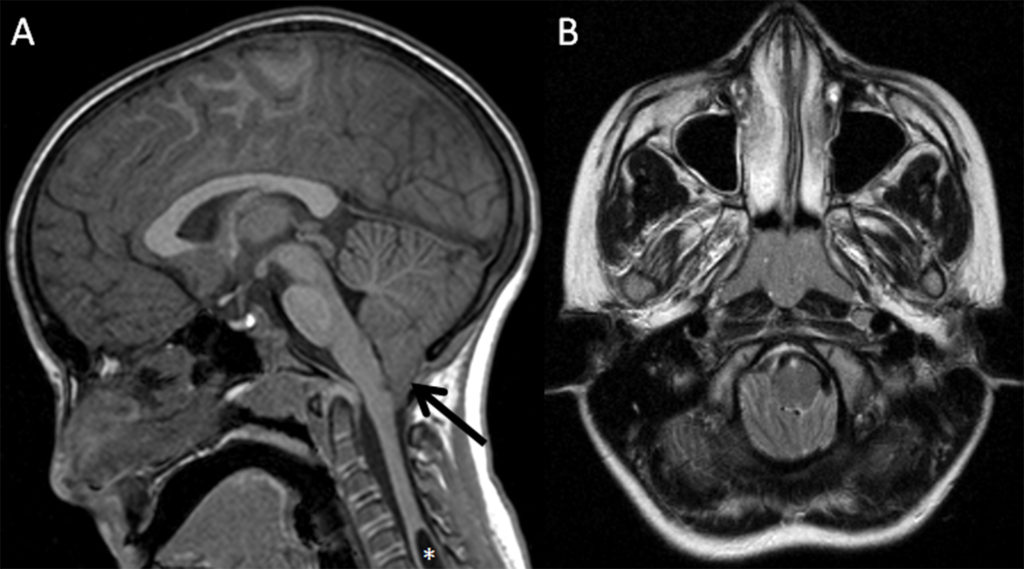 Fig. 1. A, Sagittal magnetic resonance (MR) image of a child with Chiari I deformity shows downward displacement of the cerebellar tonsils within the upper spinal canal (arrow) as well as a syringohydromyelia within the cervical spinal cord (asterisk). B, Axial MR image of the same child shows compression of the lower brainstem by the downward displaced cerebellar tonsils (reprinted with permission from Poretti A, Boltshauser E and Huisman TA, Chiari malformations and syringohydromyelia in children, Semin Ultrasound CT MR 2016;37(2):129-42). 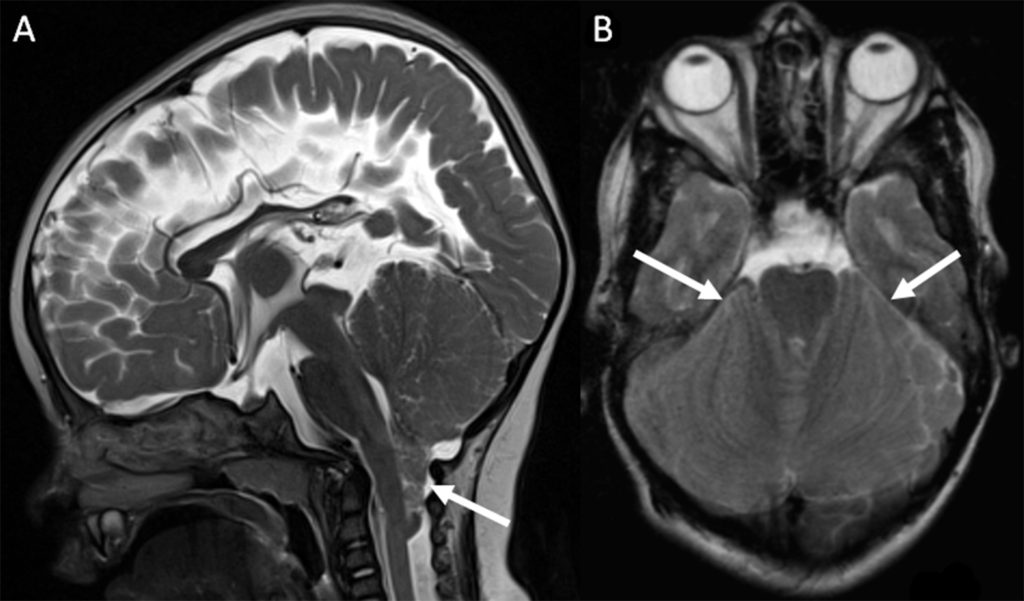 Fig. 2. A, Sagittal magnetic resonance (MR) image of a child with Chiari II malformation shows a small posterior fossa with downward displacement of part of the cerebellum into the spinal canal (arrow) as well as other characteristic findings such as an abnormal shape of the brainstem and corpus callosum. B, Axial MR image of another child with Chiari II malformation shows embracing of the brainstem by the cerebellar hemispheres (arrows)(reprinted with permission from Poretti A, Boltshauser E and Huisman TA, Chiari malformations and syringohydromyelia in children, Semin Ultrasound CT MR 2016;37(2):129-42).

Chiari II malformation is defined by a small posterior fossa associated with downward displacement of part of the cerebellum (Fig. 2). Chiari II malformation occurs in about 0.4 per 1000 live births and is almost always associated with an open back in which part of the spinal cord is exposed to the skin (open spinal dysraphia). Children with Chiari II malformation present with symptoms during the neonatal period because of the malformed/injured spinal cord (e.g. weakness, sensory impairment, and abnormal bowel and bladder function) and hydrocephalus (increased amount of water on the brain). The main MRI finding in Chiari II malformation is a small posterior fossa with the cerebellum embracing the brainstem and downward displacement of part of the cerebellum into the upper spinal canal. In addition, the brainstem may also be inferiorly displaced and several other abnormal findings may be present including hydrocephalus. Within the last few years, some highly specialized centers introduced a surgical repair of the non-skin-covered spinal defect during pregnancy that is before birth. This procedure is offered in several specialized centers across the globe, and has shown to decrease the downward cerebellar displacement and, hence, decrease the incidence and severity of a hydrocephalus after birth. In addition, this may improve the motor function of these children.