Disguising insulin as an antibody: a Trojan horse for type 1 diabetes prevention

Type 1 Diabetes (T1D) is an auto-immune disease. These diseases appear when our own immune system, which normally protects us from foreign pathogens (viruses, bacteria,…), attacks our own cells. In the case of T1D, T lymphocytes, which are a crucial part of our defence system, attack and destroy insulin-producing beta cells in the pancreas. Insulin is a central molecular target of this attack and the key hormone for sugar metabolism. Once insulin is not sufficient to regulate blood sugar levels, our organism cannot stock sugars and use them to produce energy. As a consequence, T1D develops and the patient needs multiple daily injections in order to replace the missing insulin and control sugar levels. 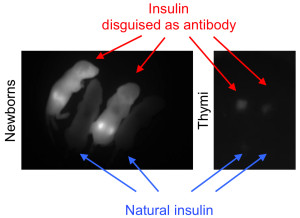 At present, insulin therapy is the only treatment available. These daily insulin injections do not achieve a perfect glucose control, because it is difficult to reproduce the natural fluctuations in the secretion of this hormone, thus often alternating between glucose values that are either too high (hyperglycemia) or too low (hypoglycaemia). Besides these daily difficulties affecting quality of life, chronic hyperglycemia fosters long-term complications (cardiovascular disease, renal failure, visual impairment, lower limb amputations), which are the dreadful toll of this disease. Moreover, T1D mostly strikes children and young adults and its incidence increases at about 4% per year. There is therefore a pressing medical need to develop preventative therapies that target the auto-immune process before beta-cell destruction rather than replace insulin when is too late.

All T lymphocytes pass through the thymus during their development. This process involves their exposure to self-molecules such as insulin. If insulin is recognized, the corresponding T lymphocytes have a potential to engender disease and are therefore eliminated or converted into regulatory (protective) subtypes. We know that this thymic selection process is defective in T1D, because self-molecules are under-expressed in the thymus. This process is also the earliest fail point in disease progression, taking place during perinatal life. Yet, no therapy has been conceived to target this fail point. The challenge is to deliver self-molecules such as insulin to the thymus, in order to boost this selection process.

To this end, we took inspiration from maternal antibodies which, contrary to other large molecules, are allowed to pass through the placenta to protect the foetus from intrauterine infections. Our idea was therefore to ‘disguise’ insulin as an antibody, so to grant its passage through the placenta, as Ulysses’ wooden horse did through the city walls of Troy. We could thus demonstrate that, unlike the natural hormone, the insulin disguised as antibody and administered to pregnant mice can efficiently cross the placenta and reach the fetal thymus (Fig. 1), where it drastically improves the selection of developing lymphocytes and protects newborn mice from developing T1D later in life.

This therapy is the first of its kind to target the very first step in T1D progression that takes place in the thymus. Moreover, it acts specifically on autoimmune T cells, thus leaving the immune system capable of responding to potential threats. This is not the case for other drugs, which unselectively shut down all T lymphocytes. This strategy could find valuable applications for patients affected not only with T1D, but also with other auto-immune diseases.