A molecular chaperone has been discovered that binds to amyloidogenic peptides and delays onset of aggregation and neurodegeneration. Chaperone proteins, existing in the cells of all organisms, are helper proteins that serve to keep the proteins in the cell functional, to degrade them into peptides when no longer needed, and to prevent the peptides from forming amyloid fibrils. Amyloid structures can become very large and they form fibrils that are visible under the microscope as dark spots in the brain cells of patients who suffer from devastating neurodegenerative diseases, like Huntington’s or Alzheimer’s disease, for which there is no cure today. 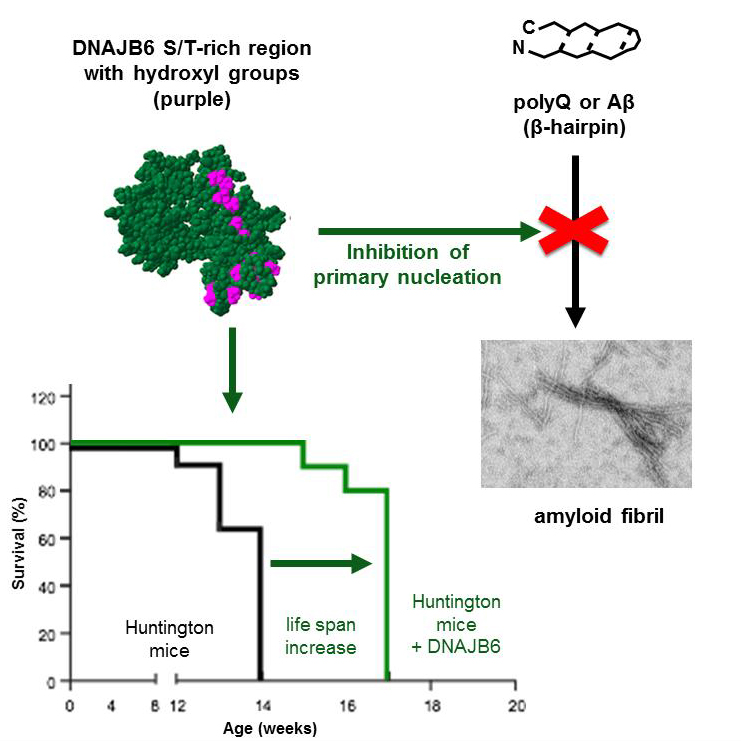 We, and several other scientists with whom we collaborate, have discovered a human chaperone protein, referred to as DNAJB6, which is uniquely efficient among a large number of screened human chaperones in protecting against formation of amyloid fibrils.

In a mouse model for Huntington’s disease, we found that the formation of amyloid fibrils is delayed, the disease symptoms are much fewer and the life-span is increased in mice with increased levels of DNAJB6. We have isolated and purified this chaperone protein, and investigated in detail how it works with amyloidogenic peptides.  These peptides may adopt a shape like a hairpin that can be pulled into the chaperone and rendered harmless. Formation of amyloid fibrils is blocked thanks to a specific part of the chaperone protein that binds the amyloidogenic peptides at a very early stage (referred to as primary nucleation) and therefore prevents subsequent stages in the formation of amyloid fibrils. Another very aggregation-prone peptide, the Aß peptide that forms amyloids in Alzheimer’s patients, is also prevented from forming amyloid fibrils via the action of the DNAJB6 chaperone; currently we test whether or not this effect also translates to protection in mice. If so, then the DNAJB6 chaperone may have a large impact to counteract neurodegenerative diseases. It is difficult to tell if it takes only a few years or much longer before this knowledge can be used to help patients. But since this effect was not even discovered ten years ago we now hope to attract research funding to deepen our insights in the mechanism of this remarkable chaperone and its significance for neuronal health which with our ageing population is becoming more and more important.