There is increasing evidence that epigenetic phenotype variation can contribute to environmental adaptation, speciation and evolution. Epigenetic changes of the phenotype are caused by differences in gene expression rather than by alteration of the genetic code. Epigenetic mechanisms include DNA methylation, acetylation and methylation of histones, and gene regulation by microRNAs. Unlike the genetic code, the epigenetic marks on the DNA and histones can be erased and rewritten during the lifetime of an organism. They can be mitotically inherited as shown by the genetically identical but structurally and functionally different cell lines in an animal’s body. Under favourable conditions epigenetic marks can also be inherited meiotically to the next generation. Clonal, invasive, hybrid, polyploid, and domesticated lineages and species have proven to be particularly suitable for investigating the role of epigenetic mechanisms in ecology and evolution. 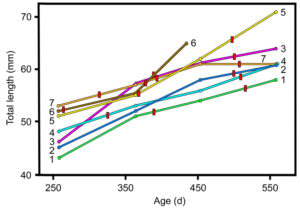 Fig. 1. Stochastic developmental phenotypic variation in genetically identical animals, exemplified by growth and reproduction of isogenic clutch-mates (1–7) of the parthenogenetic marbled crayfish. Specimens were communally raised from hatching in a narrowly standardized laboratory environment and fed ad libitum. Body size differed markedly among group-members at any time of the experiment and the individual position in the size spectrum changed over time. The differences between clutch-mates in frequency and time of oviposition (red vertical bars) were even more pronounced.

The production of different phenotypes from the same genome in the same environment by developmental stochasticity was investigated in parthenogenetic, highly inbreed, polyembryonic, and artificially cloned animals. The results revealed that stochastic developmental variation of the phenotype is relatively small in morphological traits, larger in life history traits and particularly large in behavioural traits. This finding explains why monozygotic human twins are very similar in appearance but often markedly different in preferences and other behaviours. The degree of phenotypic variation that can be caused by developmental stochasticity is exemplified in Figure 1 for growth and reproduction in genetically identical clutch-mates of the obligatory parthenogenetic marbled crayfish. An example for environmentally induced phenotypic variation is shown in Figure 2 for isogenic laboratory raised and wild specimens of the same species.

The analysis of present and historical invasions revealed that epigenetic phenotype variation is suitable to help overcoming genetic barriers typically associated with invasions such as bottlenecks and inbreeding. Once an invasive population is established, epigenetic mechanisms facilitate radiation of the invader into different niches of the new environment. Illustrative examples are the marbled crayfish that has invaded a broad range of ecosystems in Central Europe and Madagascar in the last two decades, house sparrows that have been introduced to Kenya in the 1950s, and the famous Darwin’s finches of Galapagos. Research with hybrids and polyploid species established that epigenetic mechanisms are involved in consolidation of speciation by contributing to reproductive isolation and restructuring of the genome in the neo-species. Epigenetic mechanisms may even have the potential to trigger speciation but evidence is still meagre.

Domesticated animals are particularly suitable to investigate the role of epigenetic phenotype variation in evolution because their breeding history is relatively short and much better documented than the evolution of wild species. Moreover, domesticated animals show an exceptionally broad variation in phenotypic traits and their genetics is comparably well investigated. The comparison of dogs and grey wolfs demonstrated heritability and selectability of phenotype modulating DNA methylation patterns, suggesting that selection does not only act on genetically produced phenotypes but also on epigenetically produced ones.

Fig. 2. Environmentally induced phenotypic variation in genetically identical animals, exemplified by laboratory raised and wild clone-mates of the marbled crayfish. The laboratory-raised specimens (A) had much smaller spines (arrows) on the chelipeds than isogenic relatives from a lake with numerous crayfish predators (B).

Epigenetic phenotype diversification can also explain two enigmatic ecological phenomena, the “invasion paradox” and the “general-purpose genotype”. Invasive groups can be ecologically and evolutionarily very successful even when genetically impoverished. The underlying factors remained obscure for long but epigenetic mechanisms seem to play a leading role. The production of epigenetically diverse phenotypes from the same genome may also explain why many clonal animals and plants are able to live in a wide range of habitats and geographical regions, despite genetic uniformity. A particularly great potential for epigenetic phenotype diversification seems to be the secret of the highly flexible general-purpose-genotype.