The amount of solar light hitting the surface of the earth in one hour is enough to meet the energy requirements of the whole earth for one year, the challenge is to design a system to convert it to a useful form in an efficient and cost effective manner. The existing solar cells ( most of them are silicon based) are very expensive to make, their efficiency is also quite low. 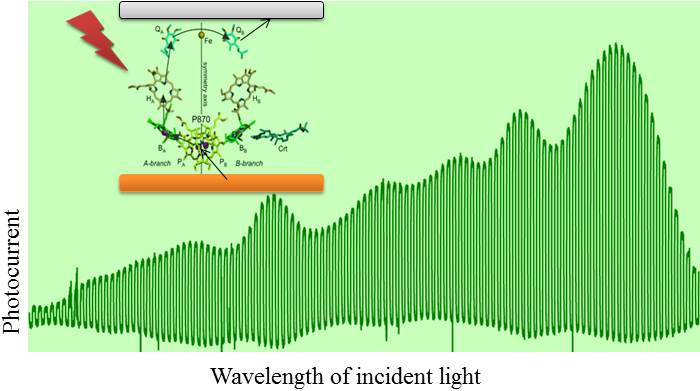 Fig. 1. Animation of bacterial photosynthetic unit sandwitched between two electrodes is shown on left side (top), when light illumination is peovided, a stream of electrons start cycling between the two electrodes. The magnitude of the current depends on the wavelength of the incident light. The variation of photocurrent with the wavelength of light is shown in the graph.

If we want to make an efficient system to harvest solar energy, we need to learn from photosynthesis, a naturally existing mechanism of solar energy conversion, which is also responsible of sustaining the life on earth. 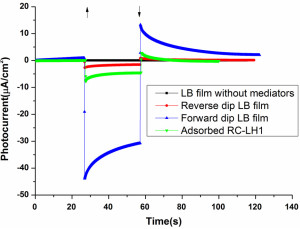 Photosynthesis is generally associated with plants, but there are a number of other organisms that exploit the similar nanoscale molecular machinery to harvest solar energy for their use. Purple photosynthetic bacteria are also one of such organisms, possessing simplest photosynthetic system. Many scientists are trying to copy the mechanism used by naturally existing photosynthetic molecules to construct an artificial system for conversion of solar energy. We can also utilize these molecules by isolating from the bacteria and putting them on a conducting surface, in this way we can use their harvested energy for our own purpose.