The foreseeable depletion of fossil resources and the increase of atmospheric CO2 leads to a urgent demand of to increase the sustainability of our industry. The pharmaceutical and chemical industries belong to the most waste-intensive and energy consuming industries, offering a tremendous potential for savings. Enzymes are optimized for very mild reaction conditions, and the selectivity of enzymes makes it possible to shorten reaction routes. Both results in considerable savings in waste and energy, making biocatalysis a clean and sustainable technology.

Enzymes that catalyze redoxreactions need the supply of external electrons from specific mediator molecules. As natural mediators such as the nicotine amide cofactor NADPH are very complex molecules, it is difficult to transfer electrons to them. In microorganisms these electrons are usually supplied by the oxidation of carbohydrates to carbon dioxide. This requires the addition of an equal amount of sugars for every molecule that is converted, resulting in an unsatisfactory atom efficiency. 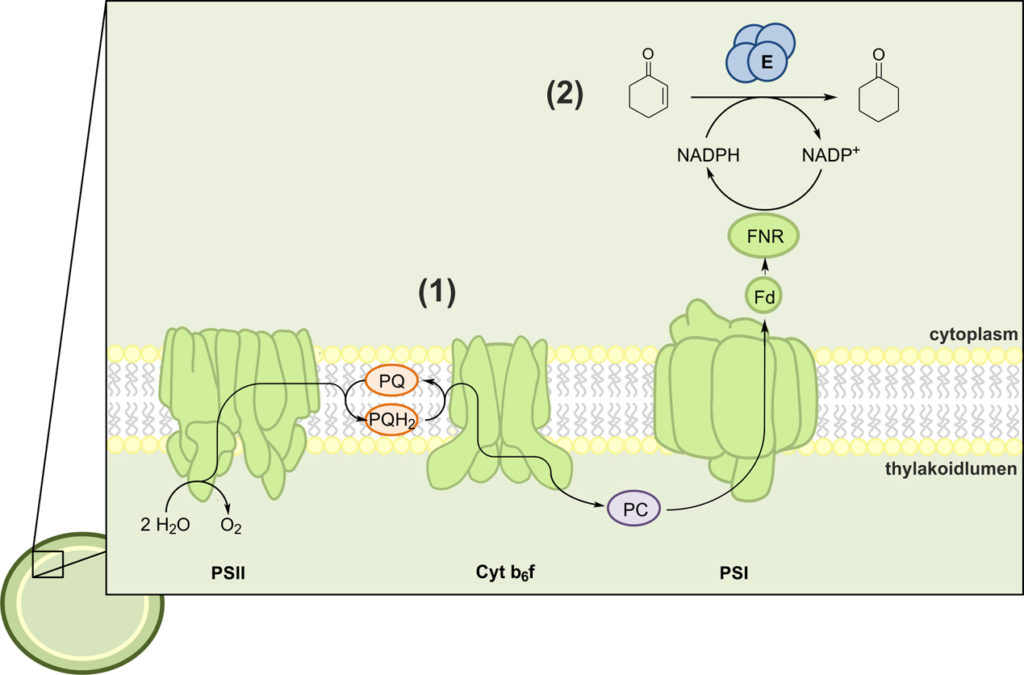 Fig. 1. Scheme of the photosynthetically driven biotransformation. The first step of photosynthesis (1) contains the water photolysis during which electrons are gained from water. Subsequently these electrons are transferred to a higher energy level by excitation with light. Due to their high energy level the electrons are transported along an electron chain leading from photosystem II (PSII) to PSI. Via the mediators ferredoxin (Fd) and ferredoxin-NADP+-reductase (FNR) the electrons are transferred to NADP+ to give NADPH. Thus photosysnthesis generates NADPH which is partitially used by the enzyme(2) to reduce the added substrate. Cyt b6f: Cytochrome b6f, E: enzyme, PC: plastocyanin, PQ: plastoquinone, PQH2: Plastohydroquinone.

A rather new approach investigates the possibility to use photosynthesis as an alternative electron supply to drive biocatalysis. In addition to plants, some microorganisms like microalgae and cyanobacteria are capable of photosynthesis. In fact, cyanobacteria were the first photosynthetic organisms and are thought to be the precursors of chloroplasts. During photosynthesis the energy harvested from light is converted into chemical energy using water and CO2. This chemical energy is used to drive the metabolism, including enzyme production. By genetically altering the organism it is possible to introduce foreign enzymes which can be used for biocatalysis. This makes is possible to introduce a wide range of different reactions into the cell. The electrons used for the redoxreactions stem from photosynthetic water splitting. As water is the cheapest and cleanest available electron donor, this methods offers considerable advantages regarding the sustainability of the reaction.

This study analyzed the feasibility of a photosynthetically driven biocatalysis. The cyanobacterium Synechocystis sp. PCC 6803 was genetically modified to produce an enzyme capable of reducing C=C double bonds. This enzyme requires the cofactor NADPH, which is produced in high amounts during photosynthesis (Fig. 1). The study addressed the photosynthetic dependency of the system, its limitations and potential improvements.

Several substrates were tested in respect to conversion rate and selectivity of the product formation. It could be demonstrated that cultures incapable of photosynthesis  – due to dark incubation or treatment with an photosynthetic inhibitor – showed a slower conversion rate in comparison to photosynthetically active cultures, allowing the assumption that the biotransformation is indeed directly linked to photosynthesis.  Due to this dependency the cell density represents one of the limiting factors of this system. Usually a higher amount of cells equals a higher amount of enzyme and thus equals a higher product formation. Since the reaction is linked to light, a higher cell density results in an overshadowing of cells located in the center of the reactor. This makes it difficult to accelerate the reaction by increasing the amount of catalyst. Furthermore, scale up is complicated by substrate toxicity as well as biofilm formation. Nevertheless, the best biotransformations in laboratory scale achieved a full conversion of the substrate to the desired product without formation of side products. Moreover subsequently 82 % of the product could be isolated as a pure oil.

Briefly, due to drawbacks, like slow generation time of cyanobacteria and substrate toxicity, this system is still in a rather easy stage of research and does not offer the productivity of established, sugar-dependent systems. Still these results demonstrated the feasibility of the system and contribute to the next generation of biotransformation using photoautotrophic microorganisms for a sustainable chemistry.