The difference between a human hair and an animal hair may not be obvious to the naked eye, until it is scrutinized underneath the microscope or by other means. Although it may be rather easy for a trained hair analyst to differentiate between a human hair and an animal hair, based on the scale cast, presence or absence of a medulla, and/or other discernable microscopic characteristics, conclusions drawn via microscopic comparisons suffer from the lack of associated statistical levels of confidence. Additionally, microscopic examination of hair can be considered subjective with the possible incorporation of examiner bias. Some of these pitfalls were highlighted as points of concern by the 2009 National Academy of Sciences (NAS) report and the 2016 President’s Council of Advisors on Science and Technology (PCAST) report. 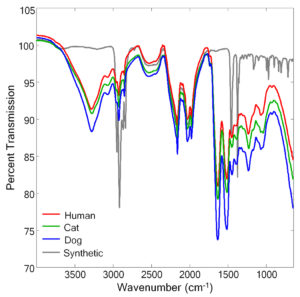 Fig. 1. Overlay of the raw mean spectra of synthetic, human, cat, and dog hair samples used in the study.

For a more confirmative approach to individualization, a DNA profile can be obtained from hair evidence. In particular, a nuclear DNA profile can be obtained if cellular material (e.g. follicular tag or root sheath) is present. However, if cellular material is not present, a mitochondrial DNA profile may be obtained. Nevertheless, DNA analysis overall is a destructive technique that is time consuming and relatively expensive; not to mention obtaining a usable profile is not guaranteed. Therefore, a non-destructive, relatively quick, and confirmatory method, which complements microscopic hair analysis, would significantly benefit forensic trace evidence.

Here we demonstrate a proof-of-concept study that incorporates the use of attenuated total reflection Fourier transform-infrared spectroscopy (ATR FT-IR) and multivariate statistics to differentiate natural and synthetic hairs. A total of forty donors from humans, cats, and dogs, and one synthetic wig fiber, were used for this study. The human donors varied in race, biological sex, and age; the breed of the cat and dog donors also varied. For comparison, Figure 1 shows the raw mean spectra of the synthetic, human, cat, and dog hair samples. Visual differences between the natural and synthetic fiber spectra are noticeable (Figure 1), which allowed to easily distinguish between them. However, there were only minor differences between the hair spectra from humans, cats, and dogs, and therefore multivariate statistical analysis was implemented to distinguish between them. 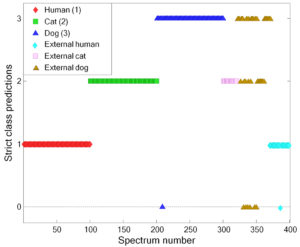 Fig. 2. Strict class predictions for the external validation samples loaded into the species-specific PLSDA model. Deviations from each of the classes’ horizontal line represent a misclassification.

Partial least squares discriminant analysis (PLSDA), a statistical classification technique, was utilized for the differentiation of human, cat, and dog hairs. The PLSDA model was built with an internal calibration dataset of thirty donors (ten each of human, cat, and dog). The model was externally validated using ten new hair donors (three humans, two cats, and five dogs). Using this approach, all calibration spectra, except for one dog hair spectrum, were predicted to their correct class under strict class predictions. More importantly, under the more rigorous internal cross-validation (ICV) prediction analysis, all of the human hair spectra were correctly predicted. Under external validation (EV), where predictions were made for spectra that were not included in the calibration dataset used to build the PLSDA model, there was only one human hair spectrum misclassified under strict class predictions (Fig. 2). The accuracy of predictions was high for the human class with a sensitivity of 1.00 for both ICV and EV; and a specificity of 0.99 and 1.00, respectively, for ICV and EV.

Overall, this study demonstrates the ability to differentiate human hairs from animal hairs (i.e. cats and dogs) with high accuracy. This work can only supplement and support the conclusions drawn by forensic hair examiners, which would significantly benefit the field of trace evidence. More importantly, the developed methodology helps to overcome one of the pitfalls of microscopic hair analysis by incorporating levels of statistical confidence as recommended by the NAS and PCAST reports.