Going my way? A tale of enzyme recruitment and activation

Protein synthesis is an energetically costly cellular process, in part due to the metabolic requirements of ribosome assembly and gene-specific messenger RNA (mRNA) production.  Consequently, biosynthetic flux through the protein translation pathway is tightly regulated while translational misregulation is implicated in diseases ranging from mental retardation to cancer. Organisms have evolved multiple means to modulate ribosome biogenesis, activity and turnover.  In baker’s yeast, the Prp43 DExD/H-box RNA helicase is required for the maturation of both ribosomal RNA (rRNA) and mRNA and thus integrates the two otherwise distinct RNA inputs required for protein synthesis.  Loss of Prp43 activity inhibits multiple steps in 25 & 18S rRNA processing and impairs the efficiency and fidelity of intron removal from pre-mRNA.  Three proteins, each bearing a loosely conserved glycine-rich G-patch motif, appear critical for Prp43 function in rRNA maturation (Sqs1, Pxr1) and pre-mRNA splicing (Spp382).  The G-patch motif is required for the enzymatic activation of the Prp43 and, at least for Spp382, appears sufficient to stimulate Prp43 nucleic acid unwinding (i.e., helicase) activity in vitro.  Given these observations, it seemed likely that Spp382, Sqs1 and Pxr1 act similarly, with the common G-patch domain serving to promote Prp43 activation and the unique features directing rRNA or pre-mRNA pathway-specific associations. 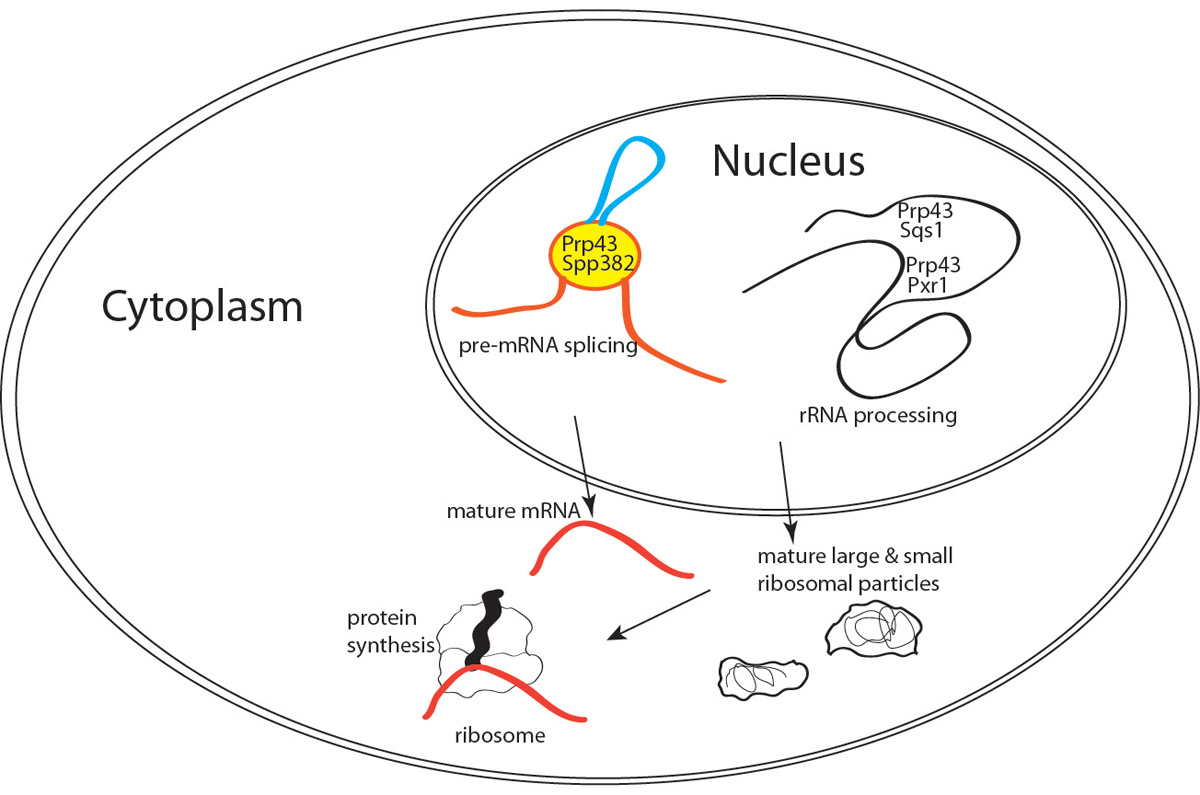 Genetic and biochemical studies were performed to test this hypothesis of G-patch function. The results showed that while the G-patch is sufficient for Prp43 interaction, the three G-patch peptides differ considerably in apparent Prp43 affinity and in the ability to promote Spp382 activity in pre-mRNA splicing and Pxr1 activity in rRNA processing.  A correlation was observed between G-patch dependence for Prp43 interaction and the strength of the G-patch-Prp43 yeast two-hybrid (protein binding) response – here, the Spp382 G-patch interacts best and the Spp382-Prp43 interaction is fully G-patch dependent.  In contrast, the Pxr1 G-patch interacted poorly with Prp43 and the Pxr1-Prp43 interaction was essentially G-patch independent.  The Spp382 and Pxr1 G-patch motifs proved largely incompatible in domain swap experiments while Sqs1 G-patch serves as an acceptable compromise in either chimeric context.  Surprisingly, a single amino acid change within the Pxr1 G-patch domain, H55P, was sufficient to recover much of the splicing activity of the Spp382-Pxr1 (G-patch) chimera without perceptible enhancement of Prp43 interaction.  Similar to what was seen previously for Sqs1, Pxr1 sequences outside of the Pxr1 G-patch domain stabilize the Prp43 interaction but, paradoxically, these are dispensable for Pxr1-dependent Prp43 activity in rRNA processing.

Most eukaryotes contain two dozen or more DExD/H-box RNA helicases that function in RNA biochemistry from synthesis to decay.  These must be regulated to prevent non-productive ATP consumption and pre-mature biological activity.  Very little is known about the nature of and function of their trans-acting regulators, however.  Our work and related observations by others support the view that Spp382, Sqs1 and Pxr1 proteins bind Prp43 through complex interactions to stimulate its helicase function.  The data argue against the G-patch motif acting as simple interchangeable domain and raise the question of how the unique features of each G-patch protein contribute context-specific information in RNA processing.  We believe that multiple steps in eukaryotic gene expression might be amenable to experimental manipulation through genetic or pharmacological manipulation of DExD/H-box protein cofactors.