As a result of human activities, many wild organisms are exposed to increased concentrations of metals in their environment. Urbanized areas are typically more polluted than remote areas due to enhanced emissions of metals mainly by traffic and industry in the former. Insects living in urban areas take up metals from their habitat and can accumulate them in their tissues. These metals are then further transferred along the food chain by consumption of insects by other organisms like insectivorous birds or bats. Some biological and ecological features of bats can lead to a strong accumulation of trace metals (e.g., lead) in their organs and the occurrence of toxic effects, which may eventually even result in the death of the animals. Important features of bats in this context are (1) their high daily food ingestion in combination with (2) their longevity and (3) occurrence in urban environments. As bats are protected species, many of which are endangered, a non-destructive and non-invasive method is needed to study their metal exposure. Hair has been shown to be a suitable monitoring unit for analyzing metal exposure in other mammals, and we therefore used this method also on bats. As bats are small mammals, a method had to be developed that requires only small amounts of hair (1 to 5 mg per individual) for analysis. 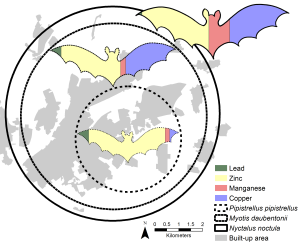 Our study species were the common pipistrelle (Pipistrellus pipistrellus), the Daubenton´s bat (Myotis daubentonii) and the common noctule (Nyctalus noctula), which occur within the same urbanized area in Germany (town of Giessen). They differ with respect to the degree of their ecological association with humans (synanthropy) and, in consequence, metal exposure. We hypothesized that this variation would be reflected by differences in metal content of their hair

The common pipistrelle is a typical inhabitant of urban habitats. It forages mainly on small and soft-shelled insects like midges or caddisflies along alleys, hedges and water bodies. Its home range is typically smaller than those of the other two species. Daubenton´s bat preferably forage on midges above water bodies, having a middle sized home range compared with the other species. The common noctule has the greatest home range of the three species, with preferred foraging areas being pastures and rivers. Its prey spectrum includes caddisflies, midges, moths, butterflies and beetles.

Individuals of the three species were captured at their flight routes or at their roosts and hair samples were taken in a standardized way. The hairs were then washed with chemical agents to remove exogenous metal contaminations. Each sample was dissolved in acid using a miniature microwave with the advantage of analyzing each sample individually. By using inductively coupled optical plasma spectrometry for identification and quantification of trace metals, different trace metals could be determined simultaneously.

Cadmium concentrations in hair were highest in the common pipistrelles, however, the differences among species were not statistically significant. For lead and zinc, we found significantly higher values in the pipistrelles compared to the other two species (Fig. 1.). These findings support the hypothesis that bat species living in more urbanized areas are exposed to higher environmental levels of metals than species showing a lower degree of synanthropy. For manganese and copper, significantly higher concentrations were observed in the common noctule compared to the other two species (Fig. 1.). This may be related to the difference in food spectrum between the common noctule (high percentage of beetles) and the other two species.

In conclusion, our study demonstrated that analysis of metal levels in hairs is a highly promising way of studying metal exposure of bats in a way acceptable from a conservationist perspective.