How selenium tolerates arsenic toxicity in rice plant? Role of phenolics and nutrient elements in amelioration of arsenic induced phytotoxicity

Arsenic (As) contamination is a major environmental hazard of recent times which poses a health risk for human through food chain contamination. Nearly 200 million people are at risk of As toxicity. Millions of people depend on rice for nutrients and calories. Rice is a good accumulator of As, thus, rice consumers are at great risk. Arsenic exerts toxicity to plants in various ways such as increased production of reactive oxygen species (ROS) and consequently the oxidative damage hampers plants growth and yield. Selenium (Se) is an essential nutrient element for human and is also beneficial element for plants which enable them to counter against various abiotic stresses at low dosages. Many toxicological studies revealed that Se is an antagonist of As toxicity and carcinogenicity in mammals. Plants respond against As induced oxidative stress through synthesis of enzymatic and non-enzymatic antioxidants and surge in sulfur assimilation required for thiol mediated detoxification. Selenium also helps in amelioration of As induced phytotoxicity by regulating the production of phenolic compounds. 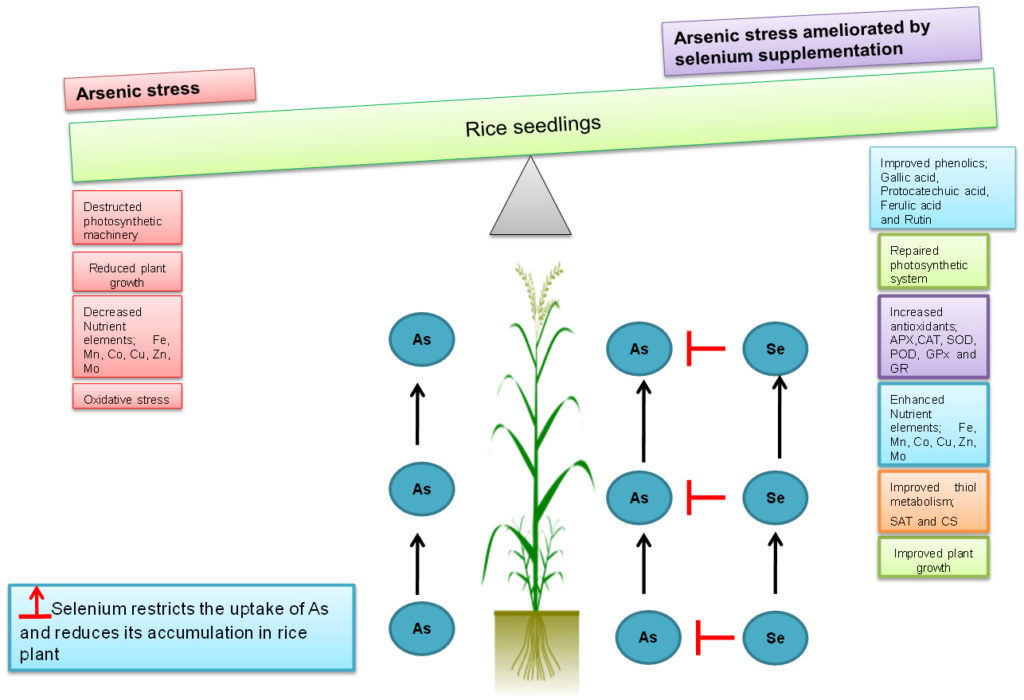 Selenium supplementation (25µM SeIV) to As (25µM AsIII) exposed plants improved the plant growth in comparison to As alone treatment, exhibiting antagonistic interaction between As and Se. Photosynthetic pigments were also signiﬁcantly increased upon Se supplementation during As stress. The improved growth of rice in As+Se treatment was thus attributable to the improved levels of photosynthetic pigments which contribute towards biomass gain and in addition to lesser As uptake. When Se and As were supplied together the accumulation of As was reduced significantly in both root and shoot on the contrary, the accumulation of Se increased in both the tissues of rice plant. Since both AsIII and SeIV share the common silicon inﬂux transporter pathway for uptake (OsNIP2;1), it appears that Se antagonizes the uptake of As as a preferred substrate over arsenite. Selenium supplementation during As stress also improves the nutrient balance that mediate As tolerance in rice plant through higher activity of different antioxidant enzymes requiring divalent cations (Mn, Cu, Zn and Fe for SOD and Co and Fe for catalase). Thus Se helps in scavenging of ROS, chlorophyll biosynthesis, ATP synthesis and nitrogen metabolism (Mo). Overall, the Se helps in reducing As uptake and subsequently increase uptake of other nutrient elements (divalent cations) required for antioxidant defence mechanism and plant growth. Phenolic compounds constitute one of the non-enzymatic antioxidants which scavenges ROS in plants and inhibit lipid peroxidation by trapping the lipid alkoxyl radical thus stabilize membranes by decreasing membrane ﬂuidity and protects plants from adverse abiotic stress. The observed increase in phenolic compounds in Se treatment possibly contributes towards amelioration of As induced toxicity.

The present work concluded that Se supplementation ameliorated As toxicity in rice plant by reducing As accumulation and reverting As induced nutrient deﬁciency, increased antioxidant activity and increase in photosynthesis (Fig. 1).