A variety of cytokines regulate the survival, growth, differentiation and apoptosis of leukemia cells. Accordingly, aberrant or excessive expression of their receptors may be associated with the biological activity of leukemia cells, and hence with the outcome of such patients. It is well known that IL-2 receptor α-chain (IL-2Rα, CD25) expression has predictive value of poor prognosis in patients with acute myeloid leukemia (AML). Three classes of IL-2 receptors (IL-2R) exist: low affinity receptors (CD25 alone), intermediate affinity receptors [IL-2Rβ and IL-2Rγ (γc)], and high affinity receptors (all three chains). Only intermediate and high affinity receptor can transduce IL-2 signal, indicating that both IL-2Rβ and γc are essential for IL-2 signaling. In AML, CD25 is expressed in 10-20 % of the cases, and these cells do not respond to IL-2 because of lacking IL-2Rβ. By the way, the growth of AML cells is regulated by a network of various cytokines including IL-3, granulocyte-macrophage CSF (GM-CSF), and granulocyte (G)-CSF. Compared to GM-CSF and G-CSF, IL-3 has more potent proliferative effect on CD25(+) AML cells, suggesting that CD25 expression is closely associated with the IL-3 responsiveness of AML cells. 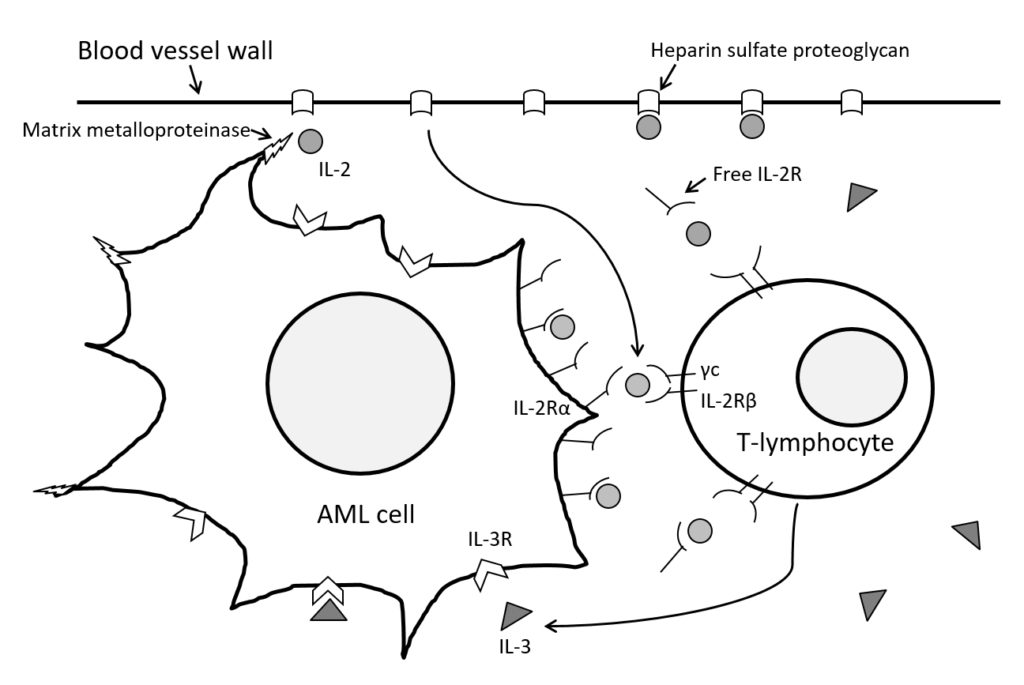 Actually, cell surface IL-3Rα (CD123) is more highly expressed on CD25(+)AML cells than on CD25(−)AML cells. Interestingly, it has been reported that addition of IL-3 to early myeloid cells or IL-3 dependent cell lines led to an increase in the level of cell surface CD25 expression. Since STAT5 is the key transcription factor in IL-3 signaling, and CD25 is transcriptionally regulated by STAT5, CD25 may be induced by STAT5 that is activated by IL-3. Additionally, IL-3 dependent leukemia cell line expressing high levels of CD25 grew preferentially in the lymph node, which suggested that CD25 plays a role in modulating the growth of leukemia cells in sites that contain high levels of IL-2 and a dense distribution of T-lymphocytes. We speculate that the CD25/IL-2 complex on AML cells plays some role in the cell-to-cell cross talk or cell-to-cell interaction. Trans-presentation of IL-2 is demonstrated as a mechanism of delivery of a cytokine like IL-15 from one cell to another. As for local IL-2, IL-2 that is released into the circulation as a result of an immune response is readily taken up by heparin sulfate proteoglycan on blood vessels. The local availability of IL-2 is predominantly mediated by the retained IL-2 rather than the free cytokine. Bone marrow (BM) vessels are known to be increased in AML, and the vascular niche regulates AML cell survival and cell cycling. Accordingly, IL-2 accumulated on the vascular systems in the BM could be released by matrix metalloproteinases derived from BM stromal cells and/or AML cells. The enzymatically cleaved IL-2 seems to bind CD25 that is abundant on the cell surface of CD25 positive AML cells. Since substantial numbers of T-lymphocytes reside in the BM, IL-2 entrapped by CD25 on AML cells may be presented to surrounding resting T-lymphocytes with intermediate affinity IL-2R (IL-2Rβ/γc). Because T-lymphocytes can produce IL-3 in response to IL-2 mediated stimulation, trans-delivered IL-2 via CD25 could cause a cytoplasmic activation leading to IL-3 production. In addition, increased serum soluble IL-2R binding IL-2 (free IL-2R/IL-2 complex) might also contribute to the IL-2 trans-presentation in the BM microenvironment. Therefore, we hypothesize that CD25 positive AML cells have a specific biological pathway to maintain their growth which is mediated by IL-2/IL-3 interplay via CD25 between AML cells and T-lymphocytes. This may also influence the clinical outcome of patients with CD25 positive AML. Future investigations are expected to validate our hypothesis regarding some critical role of CD25 in the cell-to-cell interaction in the BM microenvironment.