Invasion of science and nature by the parthenogenetic marbled crayfish

The marbled crayfish or Marmorkrebs, Procambarus virginalis (Fig. 1A), is the only obligately parthenogenetic decapod crustacean. It was detected in 1995 in the German aquarium trade. With almost 300 publications, it is now one of the best-studied crayfish species. A published annotated bibliography reflects how this crayfish was increasingly being used in research since its first description in 2003 and how it invaded more and more natural water bodies since its first documented release in 2003. 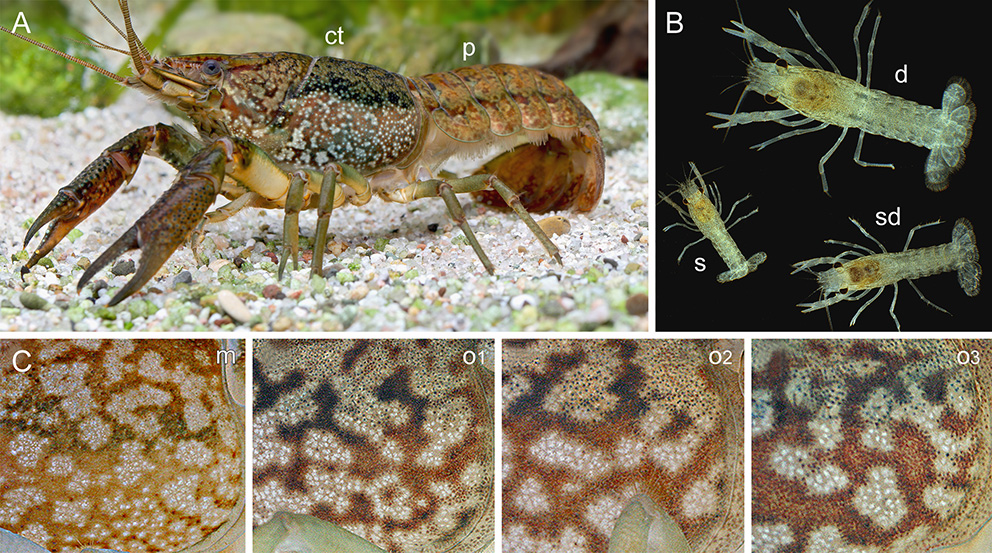 Marbled crayfish has a maximum length of ca. 12.5 cm and is a descendant of the sexually reproducing slough crayfish, Procambarus fallax that occurs in Florida and southern Georgia. All marbled crayfish known today are genetically identical and monoclonal suggesting that they stem from a single individual. Research revealed that marbled crayfish has arisen in evolutionarily recent times (~30 years ago) by autotriploidization, perhaps in captivity. Primary wild populations are unknown. Each individual carries three sets of chromosomes amounting to a total of 276 chromosomes per cell, which is exceptionally high. Marbled crayfish produces clutches of ~50-650 offspring providing an extraordinary source of genetically identical animals for experimentation. It has a generation time of about 7 months and can reach an age of 4.5 years. Marbled crayfish can be raised in very simple laboratory settings and all life stages can be fed with a single pellet food. A higher degree of genetic and experimental standardization is hardly conceivable for animals, making the marbled crayfish an ideal laboratory model.

The genome of marbled crayfish is fully sequenced facilitating research in many disciplines. The haploid genome size is ~3.5 billion base-pairs, which is a bit larger than the human genome. Marbled crayfish is kept by many research laboratories worldwide. It was used as a model for various disciplines including morphology, physiology, reproduction, development, neurobiology, stem cell biology, genetics, epigenetics, biogerontology and toxicology. Marbled crayfish is particularly suitable for epigenetics research because all clone-mates are phenotypically different from each other, despite genetic identity (Fig. 1B and C), and can adapt to a broad spectrum of environmental conditions. Epigenetics research with marbled crayfish is expected to reveal if chemical modifications of the DNA and histones like methylation and acetylation underlie the phenotypic variability of isogenic animals and if some of these marks can be inherited to the next generation. Research with marbled crayfish is also expected to show if epigenetic mechanisms help in the invasion of new ecosystems and foster speciation and evolution.

Marbled crayfish has been spread by aquarists and the aquarium trade throughout the world. Releases into the wild since 2003 has led to the establishment of numerous populations in Europe (15 countries), Africa (Madagascar), and Asia (Israel and Japan). In Europe, marbled crayfish was found in lakes (Fig. 2) and rivers from France to the Ukraine and from Sweden to Malta. In Madagascar, it has spread from an initial introduction near the capital Antananarivo in about 2003 over more than 100.000 km2, mostly by human dispersal, now inhabiting humid, sub-humid and sub-arid climate zones including highlands. Marbled crayfish established populations in oligotrophic to eutrophic lakes (Fig. 2A), brooks and rivers, swamps and rice fields, and even in acidic (Fig. 2B) and polluted waters. The warmest habitat reported so far is a thermal lake in Hungary with water temperatures of 38°C in summer and 22°C in winter. The coldest habitat was a Swedish river where specimens were observed crawling in 0-2°C cold water. Marbled crayfish can breathe atmospheric air, dig burrows (Fig. 2B) and walk over land facilitating active spreading and survival under unfavourable conditions. Because marbled crayfish is hardy, highly invasive and competitive and interacts with all trophic levels there is no doubt that it will spread further and change the food webs of the invaded ecosystems.