Is the best cancer offense a good defense?

Although the unique DiRas (Distinct subgroup of the Ras family) family of small GTPases shares homology with the pro-oncogenic Ras GTPases, it has tumor-suppressive actions. DiRas1 (also known as Di-Ras1 or Rig) has been reported to be a tumor suppressor in brain and esophageal cancers. DiRas1 is closely related to its family members DiRas2 (also known as Di-Ras2) and DiRas3 (also known as ARHI or Noey2). DiRas2 appears to be predominantly expressed in the brain, while DiRas3 is a tumor suppressor in breast, ovarian cancers, and other cancers. The mechanisms by which DiRas1 inhibits tumor growth are not fully characterized. Learning more about the ways in which this Ras-family GTPase exerts tumor suppressing signals may allow these pathways to be used to antagonize cancer promoting signaling in tumors where expression of DiRas proteins is lost. 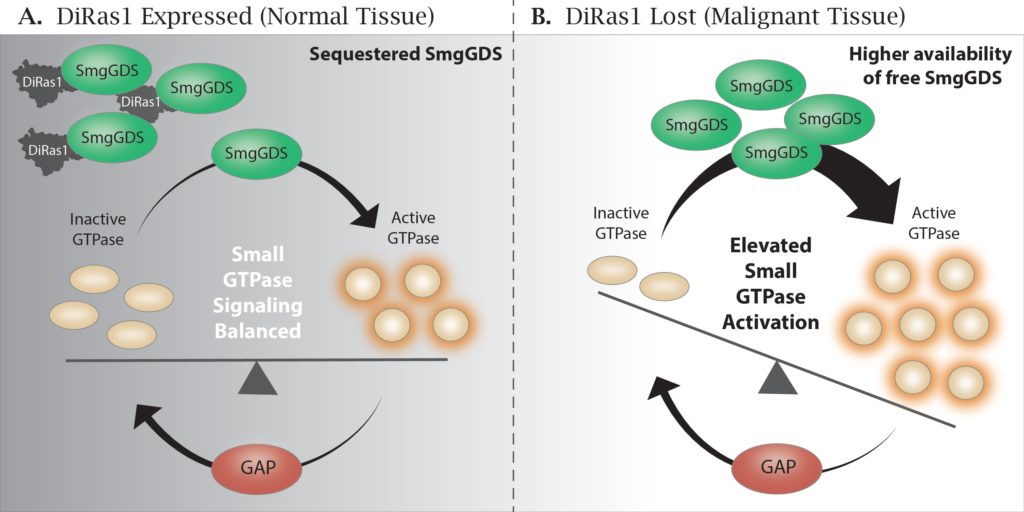 Here, we identified DiRas1 as a direct binding partner for SmgGDS. In silico docking analysis predicted that DiRas1 can compete with other small GTPases, such as RhoA and K-Ras, for SmgGDS binding. Consistent with this prediction, DiRas1 potently inhibited interactions of SmgGDS with a broad range of pro-oncogenic small GTPases, including RhoA, K-Ras, and Rap1. Binding studies showed that SmgGDS bound to DiRas1 much more strongly than it bound to RhoA, which helps to explain why only a small amount of DiRas1 could greatly decrease the association of SmgGDS with RhoA and other pro-oncogenic small GTPases. In addition, DiRas1 inhibited NF-kB activity in a number of cell lines, including brain cancer and breast cancer cells. Taken together, these findings identify a novel way in which the tumor suppressive small GTPase DiRas1 represses signals mediated by several pro-oncogenic Ras and Rho family GTPases (Fig. 1). The actions of DiRas1 thus appear, at least in part, to be due to binding to SmgGDS and essentially sequestering it to prevent interactions of pro-oncogenic small GTPases with SmgGDS. This is similar to how dominant negative small GTPases inhibit GTPase-mediated signaling in cells. This study suggests that, in some cancers, the best offense may be a good defense.