Neuroblastoma (NB) is derived from neural crest cells and its main developing sites are adrenal gland and sympathetic ganglions. It is the most common extracranial solid tumor in childhood, accounting for more than 7% of malignancies in patients younger than 15, and it is a cause for approximately 15% of all pediatric cancer deaths. Even with recent progress in pediatric cancer treatment, overall survival for the high-risk (HR) group still remains at 40 to 50%, and no curable treatment is established if relapsing or metastasizing. In 2011, it was reported that LIM domain only 1 (LMO1) encoding a transcription regulator protein is an NB-susceptibility gene revealed by genomewide association studies, possessing a tumor-promoting activity, and that the relation of LMO1 copy number to NB is stronger in the HR group than in the non-HR. 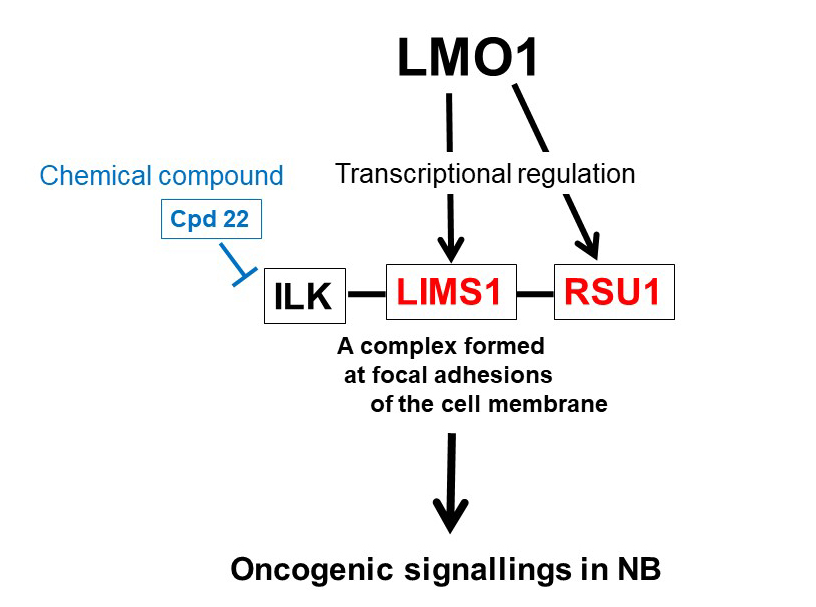 The study suggested that LMO1 is regulating the transcription of proteins that are related to NB oncogenesis, especially in the HR group. As LMO1 has no DNA-binding domain and therefore no consensus sequence for DNA binding when it works, we thought that chromatin immunoprecipitation followed by DNA sequencing (ChIP-Seq) was superior to any other method for genome-wide identification of the LMO1’s regulatory target genes. To capture the regulatory targets of LMO1 in human genome, we conducted ChIP-Seq on two NB cell lines, SK-N-SH and LA-N-5, and identified 3 target genes: LIM and senescent cell antigen-like domains 1 (LIMS1), Ras suppressor protein 1 (RSU1) and relaxin 2 (RLN2). Intriguingly, LIMS1 and RSU1 proteins together have a role in at focal adhesions or adhesion nexuses (Fig.1). LIMS1 protein, alternatively named PINCH, forms a complex with integrin-linked kinase (ILK) and parvin, and has a role in several subcellular signallings. ILK is a β1-integrin cytoplasmic domain interacting protein, functioning as a scaffold in forming multiprotein complexes connecting integrins to the actin cytoskeleton. The subcellular signalling pathways is involved in the various oncogenic pathways related to cell proliferation, invasion, migration and angiogenesis, those were revealed in other types of cancer.

We focused on the cell-proliferation promotion activity of LMO1 in NB and examined the consequences of suppression of the two genes, LIMS1 and RSU1, respectively. This revealed that the 2 NB cells, in which expression of each of the target genes was suppressed by shRNA, had reduced proliferation compared to the cells to which shGFP was introduced, suggesting that each of the genes is involved in cell-proliferation promotion. We also tested the effect of Cpd22, a commercially available inhibitor of ILK, on NB cell growth, demonstrating that Cpd22 reduced cell proliferation of the NB cell lines in vitro. Moreover, the inhibitor also significantly suppressed anchorage-independent cell growth of the NB cells in a spheroid formation assay, suggesting treatment with Cpd22 could elicit a powerful inhibitory effect on the cell growth of NB.

The findings indicate that the downstream of the LMO1-regulatory cascade includes a tumor-promoting LIMS1/ILK pathway, which has a strong potential to be a novel therapeutic target for the treatment of the HR-group of NB patients.