Mixing Insulin with phospholipids at the air/water interface

The Insulin monomer is unstable and tends to macroscopically aggregate in aqueous solutions during storage. This is a consequence of solid fibers formed by aggregation of monomers and dimers under low pH conditions; and causes loss of hormone biological activity which is a major obstacle for developing long-term delivery formulations. Though the mechanism of aggregation of Insulin still remains unclear, some studies suggested that the presence of different hydrophobic environments (i.e. air/water or lipid/water interfaces) may be involved in the formation of aggregates that may avoid gastrointestinal peptidases. In any way, surface interactions will be of importance in any effect derived from aggregation or interactions of the hormone with cell membranes.

Studies at the air/water interface in a Langmuir trough is of great use for molecular biophysicists. Irwin Langmuir developed this instrument in 1971 and can measure the surface area occupied by a monolayer (monomolecular film) under a given surface (or lateral) pressure. By using this technique, we studied the molecular packing, thermodynamics and surface topography of binary (mixed) Langmuir monolayers of Insulin and DPPC (dipalmitoylphosphatidylcholine) or POCP (1-palmitoyl-2-oleoylphosphatidylcholine), two major membrane phospholipids, at the air/water interface on Zn2+ containing solutions. Miscibility and interactions were ascertained by the variation of surface pressure-mean molecular area isotherms, surface compressional modulus (film rigidity) and surface (electrical dipole) potential with the film composition.

Brewster Angle Microscopy was used to visualize the surface topography of the monolayers (in a Brewster angle microscope, both the microscope and a polarized light source are aimed towards a liquid surface at that liquid’s Brewster angle, in such a way for the microscope to catch an image of any light reflected from the light source via the liquid surface. Because there is no p-polarized reflection from the pure liquid when both are angled towards it at the Brewster angle, light is only reflected when some other phenomenon such as a surface film affects the liquid surface). Below 20 mN/m Insulin forms stable homogenous films with DPPC and POPC at all mole fractions studied (except for films with XINS = 0.05 at 10 mN/m where domain coexistence was observed). See Fig. 1. Above 20 mN/m, a segregation process between mixed phases occurred in all monolayers without squeezing out of individual components. Under compression the films exhibit formation of a viscoelastic or kinetically trapped organization leading to a considerable composition-dependent hysteresis under expansion that occurs with entropic–enthalpic compensation. The spontaneously unfavorable interactions of Insulin with DPPC are driven by favorable enthalpy (releasing energy) that is overcome by unfavorable entropic ordering (the system is organized); in films with POPC both the enthalpic and entropic effects are unfavorable. The surface topography reveals domain coexistence at relatively high pressure showing a striped appearance. See Fig. 2. 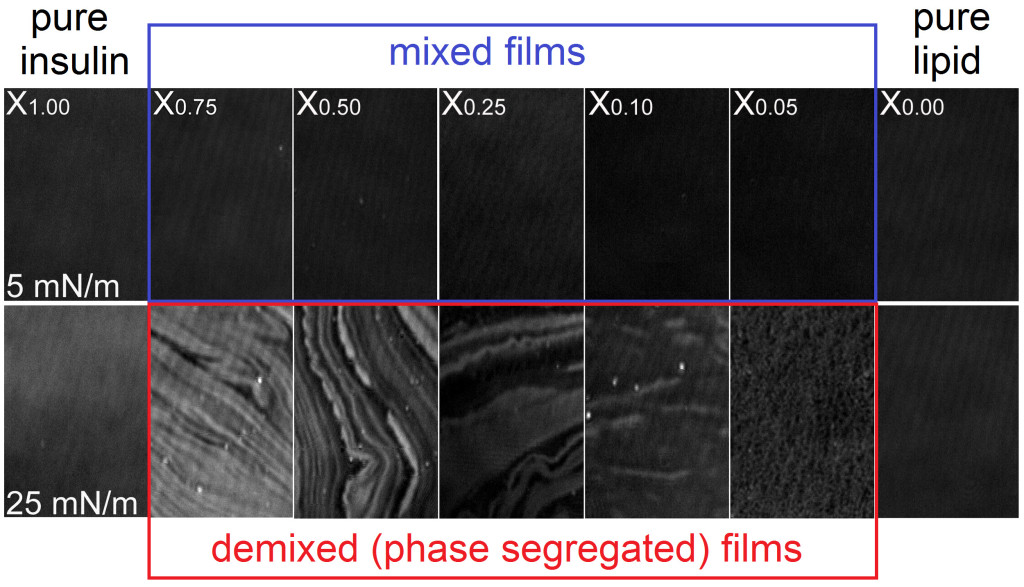 Fig. 2. Brewster Angle Microscopy images of pure Insulin (X1), pure POPC (X0) and their mixtures, at two surface pressures (5 and 25 mN/m) spread on Zn2+ containing solution. For a better visualization the contrast of the images was enhanced from the original. Frame dimensions are 185×232 µm. Note that above 20 mN/m (mixing threshold) the films show surface heterogeneity (phase segregation) due to a demixing process.

Our findings may be useful for future work as a basis for the construction of solid supported lipid–protein films for cellular growth in order to study the existence of sensitive transducing mechanisms involving the cell plasma membrane. As previously published, cultured neurons on supported pure insulin monomolecular films selectively respond to supramolecular signals at the film surface that appears to go beyond molecular specificity in the regulation of cellular function. Also, the characterization of Insulin-lipids mixing process could be useful in the development of new drug formulations.