Most cancers are driven by somatic mutations in proto-oncogenes and tumor suppressor genes. Genetic changes in a tumor may accumulate in the tissue self-renewal phase prior to neoplasm. The risk of sporadic mutations increases with age. In this regard, a positive association between patient age and the accumulated mutation burden in tumors exists for many cancer types. However, the reported evidences for such a connection are still limited. TP53 is the most frequently mutated cancer gene. The encoded p53 protein plays crucial roles in DNA repair. Hereby, we speculate that mutant TP53 can disrupt the age-related accumulation patterns of somatic mutations in tumors. We performed statistical analyses (using a linear regression model with heterogeneous slopes) on the clinically-annotated genomic data published by TCGA. 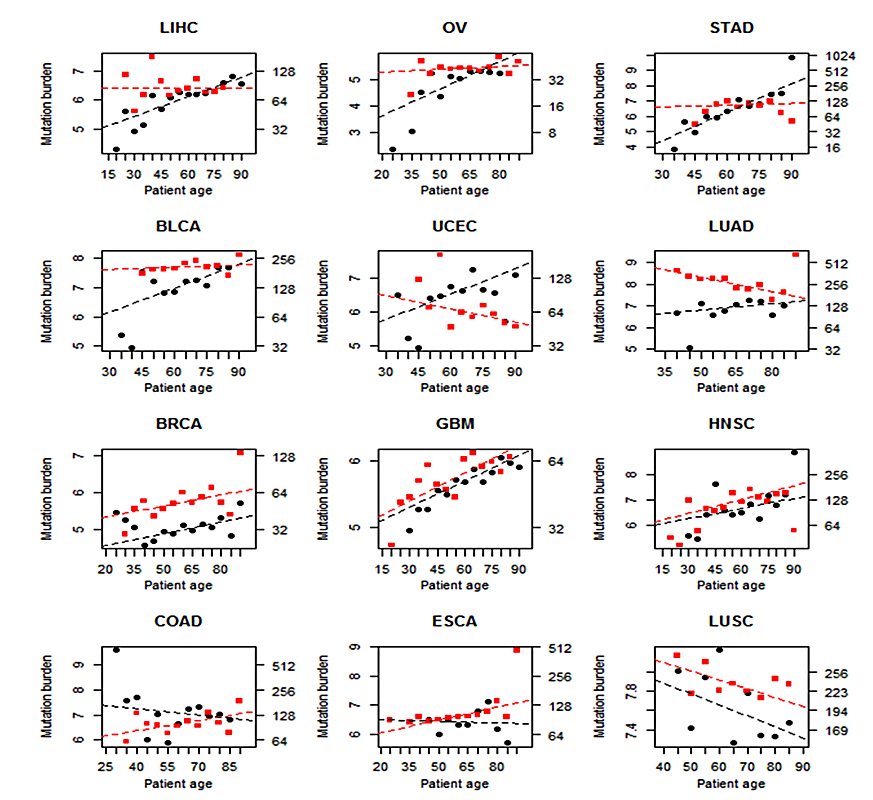 We found that there was a significant interaction between TP53 genotype (mutant versus wild-type) and patient age at the initial clinical date on somatic mutation burden for five cancers. That is, the regression coefficients of mutation burden on patient age were significant (p<0.05) for TP53 wild-type tumors but not the mutant counterparts, particularly in LIHC, OV, STAD, BLCA and UCEC. This disparity was further verified by comparing the group-specific regression coefficients. This finding confirmed our hypothesis and provided unique insights into p53-related tumorigenesis such as the potential temporal order of driver mutations.

The heterogeneous and homogeneous regression coefficients (slopes) of mutation burdens on the ages of patients at the initial clinical dates over twelve cancer types are illustrated by Figure 1. Mutation burdens are measured by the log-2 transformed numbers of somatic mutations that are labeled on the right side of each plot. The red squares (or black circles) represent tumors with (or without) TP53 mutations. The red and black lines represent the regression lines for the two genotypes, respectively. The age domain was divided into several bins (e.g. 15–24, 25–34, 35–44 . . .) and the patients within the same bin are aggregated to be a “macro sample” with the mutation burden being calculated as the average of the contained tumors. Average mutation burden of patients by decile age group (e.g. 15–24, 25–34, 35–44 . . .) is plotted with regression lines obtained from fitting the non-aggregated data for the two genotype groups, respectively.