Neurophysiological biomarkers as a method to evaluate effects of drugs

When it comes to treatment of brain diseases not affecting the motor-system, drug development has proven difficult, because the majority of tests of drug-effects in animal experiments rely on changes in the behavior of the treated subject. Without such measures, evaluation of drugs are hard to do and many disease states such as psychiatric conditions, pain states etcetera, do not display any visible symptoms. 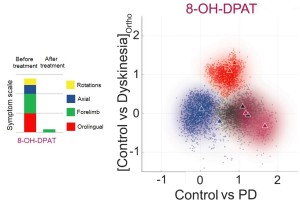 In a recent study, we set out to test if it was possible to attain reliable effect-measures from other sources than the behavior, by recording the activity of cells from large portions of the brain. To validate the method we studied a common condition related to Parkinson’s disease with strong effects on motor behaviour, known as L-dopa induced dyskinesia. In this way we could use the effect of drugs on behaviour to compare to the signals derived directly from the brain.

By recording from motor areas in the brain know to be affected in the disease, we could find a way of measuring and representing the effect of drugs directly from the brain recordings, which correlated remarkably well to the effects on behavior that were simultaneously classified. Even in cases where the motor symptoms of the disease were ablated with a drug, but other abnormal behaviors were apparent, we could see clear indications of aberrant activity in the recorded brain signals. With these first positive results, we now intend to use the same approach, for the abovementioned diseases that to date have been difficult to find cures for, and have good hope that this will provide a new alternative in the development of drugs for these debilitating conditions.