Due to current antibiotic resistance worldwide, there is an urgent need to find new alternative antibacterial approaches capable of dealing with multidrug-resistant pathogens. In fact, the World Health Organization has recently announced the increasing high levels of antibiotic resistance (AR) to very important pathogens. Furthermore, considering the rapidly growing rate of AR in various pathogens, it is estimated that this problem could surpass all other life-threatening diseases including cancer by 2050 if no proactive solutions are found to slow down the rise of drug resistance or if no alternative antibacterial strategies are successfully developed. Most recent studies have demonstrated the antibacterial activity and non-cytotoxicity of carbon nanomaterials (CNMs) such as graphene oxide (GO) and carbon nanofibers (CNFs) (Fig. 1).

Thus, GO and CNFs have demonstrated to be a non-cytotoxic promising choice for a next generation of antibacterial agents against clinically relevant Gram-positive pathogens. Many studies have also confirmed the antibacterial activity of GO against Gram-negative bacterial strains and, thus, it has been proposed as a new nanoweapon to combat multidrug-resistance bacteria as a substitute to antibiotics. From the CNMs family, GO is the most utilized nanomaterial because it is environmentally friendly and it is the easiest processing nanomaterial due to its abundant functional oxygen-containing groups, which render easier its dispersion in water. In addition, GO is now produced at a large scale and it is of lower cost than other CNMs such as graphene. In biomedicine, GO has shown excellent results in cancer treatment and, in the field of antibacterial materials. However, compared with GO, CNFs have much more electric conductivity, which can be utilised to produce conductive composite materials, and present much lower cost. Carbon nanofibers possess outstanding chemical, mechanical and electric properties, and present a quasi-one-dimensional morphology in the form of filaments. On the other hand, light-emitting diode (LED) have shown great potential in a wide range of biomedical applications. In addition, light has shown to be a powerful tool to enhance bacterial killing. Here, we investigated a nanotechnological strategy combining GO or CNFs with LED irradiation as a novel approach against two clinically relevant Gram-positive multidrug-resistant pathogens: methicillin-resistant Staphylococcus aureus (MRSA) and methicillin-resistant Staphylococcus epidermidis (MRSE) (Fig. 2). 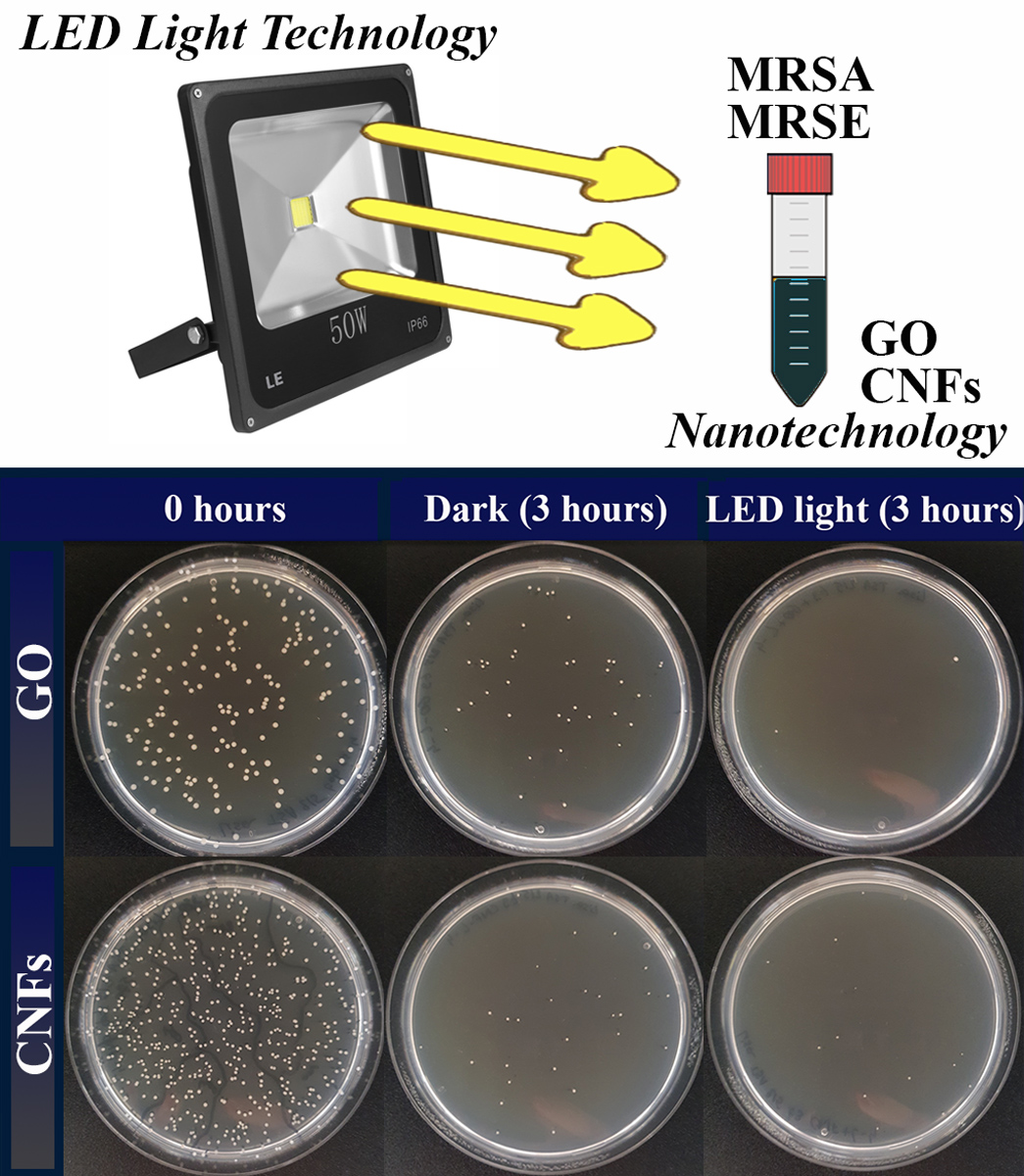 MRSE is a multidrug-resistant bacterium spreading globally and is currently one of the most important pathogens, especially among low-birth-weight premature infants. S. aureus is a major human pathogen able to easily develop resistance to most antibiotics. Furthermore, S. epidermidis and S. aureus currently constitute a leading cause of serious global health problems in diseases associated with medical instruments and catheters due to their abundant presence on the skin of every human individual. Therefore, since MRSE and MRSA are positioned between the most clinically relevant pathogens in the human skin, the cytotoxicity of CNFs and GO were studied in human keratinocyte HaCaT cells. The results of this study showed that GO or CNFs possessed no cytotoxicity and high antibacterial activity in direct contact with MRSE and MRSA cells. Furthermore, when GO or CNFs were illuminated with LED light, the loss of viability of MRSE and MRSA cells significantly increased. In conclusion, this combined antimicrobial approach opens up many biomedical research opportunities and provides an enhanced strategy for the prevention and treatment of Gram-positive multidrug-resistant infections.