Although it is obvious that every tissue in our bodies is different, the vast majority of scientific research is done on a small number of cancer cell lines studying individual cells grown in dishes — for example the famous Henrietta Lacks HeLa cell line.  This approach was embraced because it was thought that most cellular processes are relatively uniform and a liver cell in a dish does not look very different from a kidney or lung cell in a dish.  Moreover, the gross structural features of organelles within cells appear similar, for example mitochondria, vacuoles, endosomes, endoplasmic reticulum, Golgi apparatus, and the nuclear envelope that forms the barrier separating the genetic material from the rest of the cell. 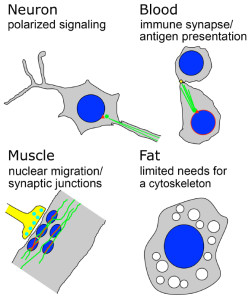