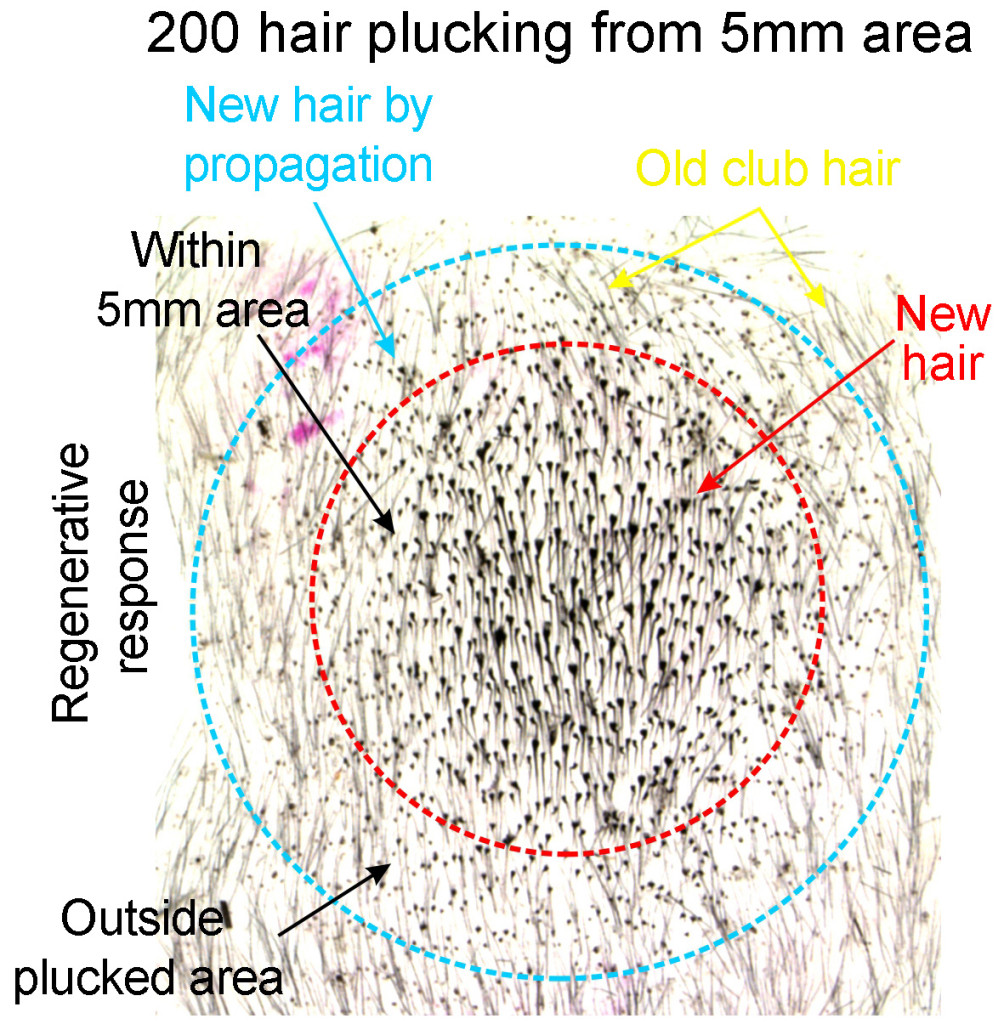 By plucking hairs with a proper arrangement, up to 5 times more neighboring, unplucked resting hairs were activated to regenerate. However, if the number of plucked hairs was below a threshold, no hairs including the plucked ones regenerated. This type of regeneration is a threshold dependent all-or-none process, which provides an organ-level example of quorum sensing. Quorum sensing is a self-driven decision-making process when certain criteria are met within the responding population. Each individual element estimates the number of other components with which they interact. Then, a response occurs when a threshold is reached. Quorum sensing has been invoked to describe bacteria cell-to-cell communication, affecting gene regulation in response to population density fluctuations. A synthetic circuit in yeast has been used to achieve versatile social behaviors including quorum sensing. Quorum sensing also has been used successfully to explain the behavior of social insects such as ants and honey bees for their collective decision-making.

In reality, how does the follicle population “cast and count its vote” in quorum sensing? The basic architectural design can be as follows. First, there is a stimulus to some, but not all, individual elements. Second, a stimulated element sends out a signal. Third, each element gauges the signal from its surroundings. Finally, a local decision is made within the population in an all-or-none fashion. The simplest models of quorum sensing are based on the idea of a signaling substance that spreads by diffusion, since the steady state concentration of such a substance will naturally reflect the spatial density of the sources that produce it. However, because the skin environment is more complex, and the mathematical model from the experimental results estimated that the quorum signal range of action was around 1 mm; greater than expected for a diffusible molecular cue. 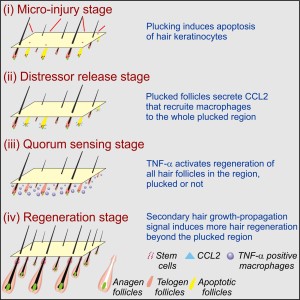 This suggested that an intermediate mobile cell vector is required for the observed response. Molecular and genetic analysis uncovered that this organ level quorum sensing is achieved by a two-step immune response cascade. First injured hair follicles will release CCL2 that recruits TNF-a secreting macrophages, which accumulate and signal to both plucked and unplucked follicles. Then TNF-a, acting through the NF-kB pathway, ultimately stimulates hair regeneration through activation of Wnt signaling.

This work demonstrates that a quorum sensing cellular circuit can integrate existing cell injury, immune response and regeneration related molecular pathways from multiple organs to quantify the distress. The stem cell population then decides whether to disregard the stimulus as negligible or respond to it with a full scale cooperative regenerative response when a threshold is reached. Thus we demonstrate a novel collective decision making process during the regeneration of a group of organ units. We contemplate that the quorum sensing behavior principle is likely to be present in the regeneration of tissue and organs beyond the skin. Utilizing such strategies opens new possibilities to modulate regeneration such as alopecia treatment or other disorders involving tissue homeostasis.