Ocular diseases in elderly persons, such as cataract and age-related macular degeneration (AMD), one of the main causes of vision loss in developed nations, are paid great attention nowadays. The eye is a complicated organ constructed with many structures having a variety of origins; the retina from the central nervous system and the lens from the epidermal tissue. Harmonious regulation is indispensable for correct development, and maintenance of structure and function, of the eye. Besides regulatory machinery, structural proteins are also important players for formation and function of the eye. For example, crystallins, well-known ocular proteins which used to be recognized simply as structural proteins of the lens, are now established that they are expressed outside of the lens, retina for instance, and performing fundamental functions there. From these points, our newly established Hirosaki small-eye rat (HiSER), showing ocular abnormalities and devoid of crystallin proteins may shed light on research of development and pathogenesis of the eye. 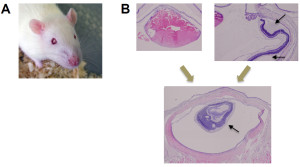 Fig. 1. (A) Appearance of HiSER. Note opacity in the eye. (B) Disruption of the lens (upper left), detachment of the retina (upper right, arrows), and aggregated retina (lower, arrow) of the HiSER eye.

HiSER’s history is as follows. In June 2012, we noticed two animals having strange eyes in the same litter in our stock of laboratory rats, Sprague-Dawley rats (SDRs). The eyes were smaller than those of the littermates and showed opacity (Fig. 1A). Fortunately, because they were male and female, we crossed them and established a mutant strain of rats with small and opaque eyes, and named it “Hirosaki small-eye rat” after the name of our university, Hirosaki University. The abnormal ocular phenotype is transmitted according to the autosomal recessive manner. HiSER shows massive and progressive structural disorganization, such as disruption and involution of the lens and detachment and aggregation of the retina (Fig. 1B). Rudimentary muscle in the ciliary body and cell infiltration in the vitreous were also observed. The subsequent efforts elucidated a partial deletion of the Cryba1 gene encoding two crystalline proteins, called βA3- and βA1-crystallins, on chromosome 10. The two crystalline proteins are originated from the single gene by alternative usage of distinct start codons and generally called “βA3/bA1-crystallin”. Further, it was also revealed that the βA3/bA1-crystallin protein was not present in the HiSER eyes as the result of the gene deletion. In addition, the deletion event affects and lowers the expression of the neighboring gene called Nufip2 (nuclear fragile X mental retardation protein interacting protein 2), of which expression is observed in the central nervous system although its function in the eye is currently unknown (Fig. 2).

Fig. 2. Genetic events in HiSER. Partial deletion of the Cryba1 gene resulted in disappearance of the βA3/A1 protein and lowered expression of the Nufip2 gene.

“What can we do with HiSER?” is the next question. As described above, HiSER exhibits wide range of abnormalities. Among them, we would like to pay our first attention to the disappearance of the βA3/bA1-crystallin protein. Besides as a lens structural protein, βA3/bA1-crystallin has been reported to be expressed in retinal astrocytes and affects retinal vascular remodeling and in lysosome in the retinal pigment epithelium (RPE) where affects phagocytosis. In this concern, AMD is a disease of RPE degeneration. Impaired lysosome function in RPE could cause RPE degeneration, leading to the AMD-specific characteristics such as drusen formation and new vessel growing. Given this notion, it may be expected that HiSER becomes a novel model animal of AMD. Our second attention will be paid to the Nufip2 gene. Although its precise function in the eye is obscure, it is speculated that some of the HiSER phenotypes may be attributable to diminished Nufip2 function, because, at least in humans, simple Cryba1 mutation usually associates with cataract only. Thus, HiSER will provide good opportunity to investigate Nufip2 function in the eye. Our continuous efforts with HiSER will open a path to further understanding of ocular development and pathogenesis.