In this paper we describe analysis of mercury in sediment cores collected from an area of land behind a dyke one year before, and one year after, it was intentionally breached as part of a managed retreat project.

Managed retreat of coastal defenses has led to an increase in the number of sites where dykes are breached, agricultural fields are inundated with seawater, sediment is deposited over soils, and new salt marshes are created. This inundation of previously dyked farmland leads to considerable biogeochemical changes and we wanted to see what implications this had for mercury biogeochemsitry in the Bay of Fundy, a biological mercury hotspot. 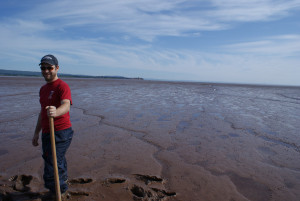 We used these paramaters to construct multiple linear regression models to see if we could them to predict the mercury and methyl mercury concentrations. Our regression model for total mercury predicted 53% of the variability in our samples and showed that total mercury was influenced by soluble carbon, sediment particle size, pH and salinity. Methyl mercury concentrations were, however, poorly predicted using the available measurements

Overall we did not find any evidence to suggest that coastal managed retreat resulted in an elevated risk of mercury methylation during the first year after inundation.