If we are ultimately to uncover how the brain encodes the information about the surrounding environment it is necessary to understand how the spatial signals are being processed and regulated. The hippocampal region plays a crucial role in the spatial orientation but the neuromodulatory inputs from other brain regions regulate the degree of hippocampus-mediated memory formation. The hippocampal inputs arising from the medial septum are proposed to have important roles in learning and memory. This review summarizes established findings, which propose the two major mechanisms by which the medial septum controls the hippocampal function: 1) neuromodulatory control on the excitability of hippocampal neurons exerted by septal cholinergic projections, and 2) frequency and power control of hippocampal oscillations, which affect the encoding properties of the individual neurons. In this review I have also included recent data which shed a new light in the signal processing between the medial septum and hippocampus. 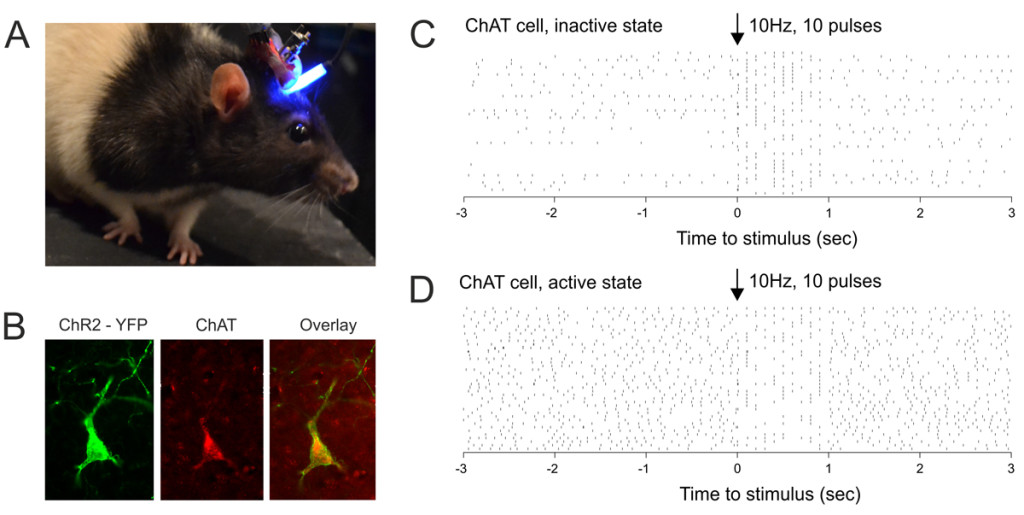 A methodological approach that allows a selective activation of the cholinergic cells in medial septum is critical for our understanding of the physiological effects of cholinergic neuromodulation in the hippocampal formation. Optical stimulation is a novel method, which is being developed in the last 15 years and is becoming a tool for selective activation or inhibition of specific types of neurons. The selected group of neurons are genetically engineered to express light-sensitive proteins known as opsins, which controlling the flow of ions through the cellular membrane in response to light. Optogenetic stimulation of the medial septum in transgenic rats showed that the activity of the cholinergic neurons and their effect on the hippocampus depends on the behavioural state of the animal. When the animal is behaviourally inactive (does not explore the recording arena) the cholinergic activation exerts strong effect on the hippocampal networks. However, when the animal is actively exploring the environment the optogenetic stimulation results in little effect on the neuronal and oscillatory patterns of hippocampal activity. This result is explained by the high spiking activity of the cholinergic neurons during active behaviour, which saturates the cholinergic transmission (Fig. 1). On a cellular level the acetylcholine facilitates the connectivity between the hippocampal neurons, which results in a long-term memory storage. This set of experiments also showed that the cholinergic neurons robustly modify the spiking of the inhibitory type of neurons in medial septum that project to the hippocampus. Thus, the indirect effect of cholinergic stimulation is mediated by rhythmically-bursting septal inhibitory neurons. We know that they mediate the generation of limbic theta rhythm (oscillation in the range of 5 – 12Hz) and evoke large-scale synchronization of brain oscillations across the limbic circuits that encode spatial memory. Recent data show that septal rhythmically-bursting neurons might be involved in the path integration and sensorimotor signal processing. The oscillatory and spiking patterns of neurons in the septo-hippocampal axis might encode the speed of whole-body motion and the perception rate of olfactory signals. These findings propose the mechanisms responsible for aligning the environmental signals to the phase of the intrinsically-generated theta rhythm. In summary, the medial septum plays a key role in the transition of the limbic system between behavioural states and also enables rapid integration of sensory and motor signals in the encoding of the hippocampal spatial representation.