Side effects of radiation therapy: Why me?

Most lung cancers are treated with radiation therapy, often in high doses.  Although these treatments are absolutely required to prolong life (by killing the tumor or slowing its growth), radiation treatment can have negative side effects that are known collectively as RILT (radiation-induced lung toxicity).   These side effects can include cough, shortness of breath, chest pain, and low-grade fever as well as severe scarring of the lung itself, resulting in loss of lung function.  Why some people develop these side effects and others do not is not clearly understood.  This article reviews a number of factors that may predict or determine why some patients experience RILT and others do not. These include: 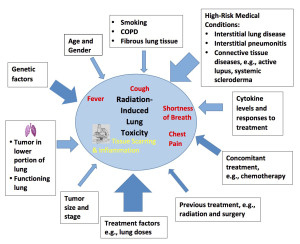 Fig. 1. Factors affecting radiation-induced lung toxicity. Toxicity symptoms are indicated in red text within the blue oval; presentation is indicated in yellow. The importance of the factor to the toxicity is indicated by the thickness of the arrows. Thicker arrow indicates a greater effect.

Patients and physicians look forward to the day when “personalized medicine” is advanced enough such that the physician can predict who is at risk for radiation-induced toxicities and adjust the patient’s treatment plan accordingly. That day will be here sooner than we think.