Arsenic and other elements in drinking water

Arsenic (As) is a toxic element, known as class (I) human carcinogen and widely distributed in the environment in trace amount. The occurrence of naturally As contamination in groundwater has been reported globally, particularly in Southeast Asia. This has received significant attention in the last three decades due to its serious health effects on millions of people and has been termed “the biggest As calamity in the world”. Gangetic plain of India is an As prone area due to its natural existence undergrounds. The problem was originated due to the shifting of drinking water sources from dugwell to tubewells to overcome the health issues caused by consumption of contaminated surface water. 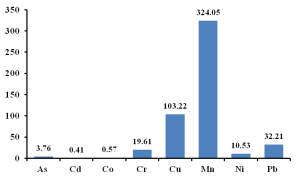 The presence of higher As in Gangetic plain was noticed in groundwater just before couple of decades due to raising the health issues in residing population. Scientific reports claim the presence of the As in whole the river stretch of Ganges. Several attempts have been made to investigate the concentration of As in groundwater, health effect due to As toxicity and mechanism of mobilization process of As in the middle Gangetic plain but very limited efforts have been directed to the presence of As and other elements in food components and the associated risk to the human health. In this study representative samples of water from tubewells, and locally grown various types of vegetables, wheat, rice (uncooked and cooked both), maize, green gram were collected from two blocks Mohanpur and Mohiuddinagar of district Samastipur, Bihar, India and elemental analysis was done with sophisticated instrumentation available in labs of University of South Australia, Adelaide, Australia . Generated data of all the elements in water and other dietary components were compared with their consumption limits set by different organizations like WHO, BIS, JECFA, US-EPA and found that 80% of the water samples exceeded WHO limit for As 10µg/L. It also appeared that 26% of the water samples had Mn above the US-EPA recommended values i.e. 500 µg/L. Other examined elements in groundwater were below the WHO guideline values. 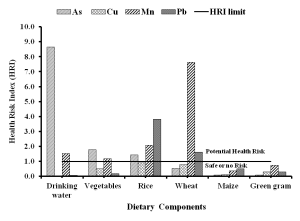 Vegetables were found to be enriched in As and other elements but drinking water contributed the major fraction of daily dietary As intake. Rice emerged as a major contributor for Cd, Cu, Pb and Ni while wheat was found to be major contributor for Mn, Cr and Zn in the population’s daily dietary intake. Vegetables served as a major contributor of Co and Ni to daily dietary intake. Cooked rice samples were found to have more As contamination then uncooked rice samples due to higher As concentration in water used for cooking purposes. The estimated exposure (µg per kgbw) for As was higher than the safe limit set by JECFA. An attempt was also made to understand the source of the all elements to the study area and found the presence of As is geogenic (coming from underground naturally) while the other elements were coming from diffuse anthropogenic activities like industries, vehicular load and agrochemical practices.

4 Responses to Arsenic and other elements in drinking water