The importance of lizards as models to analyze the process of organ regeneration is relevant since, differently from the classical amphibian models, these vertebrates are amniotes adapted to the terrestrial environment, therefore closer to mammals and humans. After wounding lizards tend to form scars or small outgrowths, like humans, except in the tail that can broadly regenerate (Fig. 1 A, B). The reason why the tail regenerates while most of other organs cannot, like in humans, is worth of intense research aiming to basic knowledge and potential medical fall-out. After tail amputation, the regeneration of the new tail begins with the formation of a mound of proliferating mesenchymal cells covered by a thick wound epidermis (WE) that allows elongation of the new tail (Fig. 1 B-C). Active cell proliferation, detected using proliferative markers such as tritiated thymidine (H*Thymidine) or 5BrdU, remains at the tip of the growing tail, likely sustained by the Apical Epidermal Peg (AEP) and a gradient of signaling and growth factors. The AEP is a group of epidermal cells formed at the tip of the blastema, which removal determines block of regeneration. 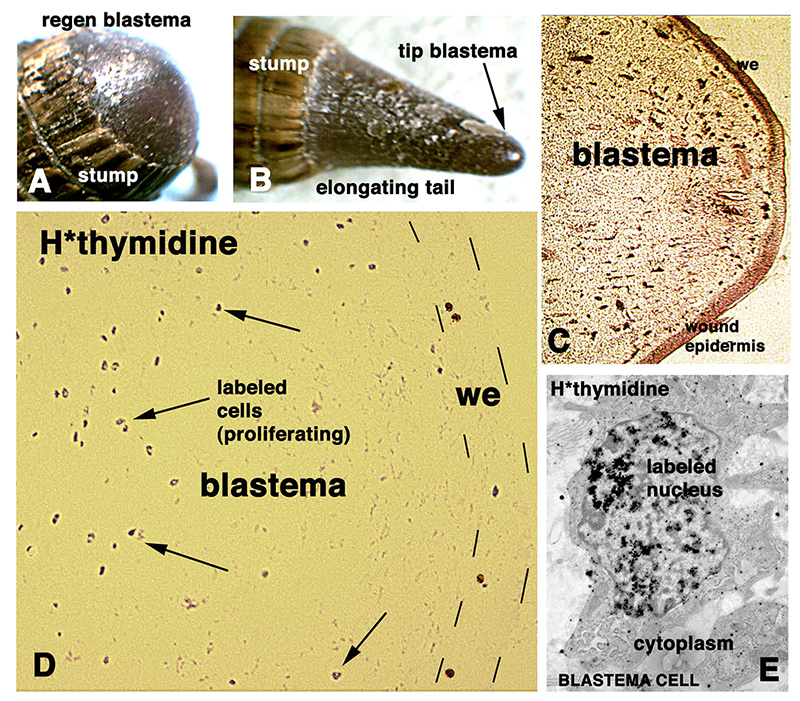 Recent transcriptome studies have identified numerous mRNAs over-expressed in the regenerating tail blastema. The most frequent and highly expressed genes are members of the Wnt-pathway (from Wingless integrated, a developmental segment polarity gene discovered in the fruit-fly Drosophila and in a mouse mammary tumor). This signaling pathway is essential in numerous developmental process and in cancer as Wnt-proteins stimulate cell multiplication in embryonic tissues and tumor cells. A high expression of wnt-genes, only in the tail blastema and not in the blastema of the limb, includes wn2b, wnt6, wnt5a, wnt5b, wnt10, wnt1, and other associated genes frz10, apcdd1, and dkk3. The latter two genes might be involved, with other tumor suppressors, in the control of the wnt-activation on cell proliferation in the blastema, avoiding that the latter turns into a mass of tumor cells. The above genes are absent in non-regenerating limb of the same lizards, strongly indicating that they are the key or master genes for regeneration. This is further indicated by immuno-localization, using fluorescent antibodies, produced against one of these proteins, Wnt-1, in the regenerating tissues of lizards.

Wnt1 appears to be mainly localized in the apical wound epidermis and in the central cells of the regenerating spinal cord, the apical ependyma (Fig. 2 A, B). These two tissues are known to be the stimulating centers for tail regeneration in lizards and they express, more than other tissues, also other genes and growth factors such as Shh, FGF and EGF, potent stimulators of cell proliferation. It has been hypothesized that Wnt proteins may form a gradient of concentration from the apex of the blastema that becomes gradually more diluted along proximal areas of the regenerating tail (Fig. 2 C). In the latter, cell proliferation ceases and mesenchymal cells give rise to the new tissues that differentiate and grow to form the new tail. 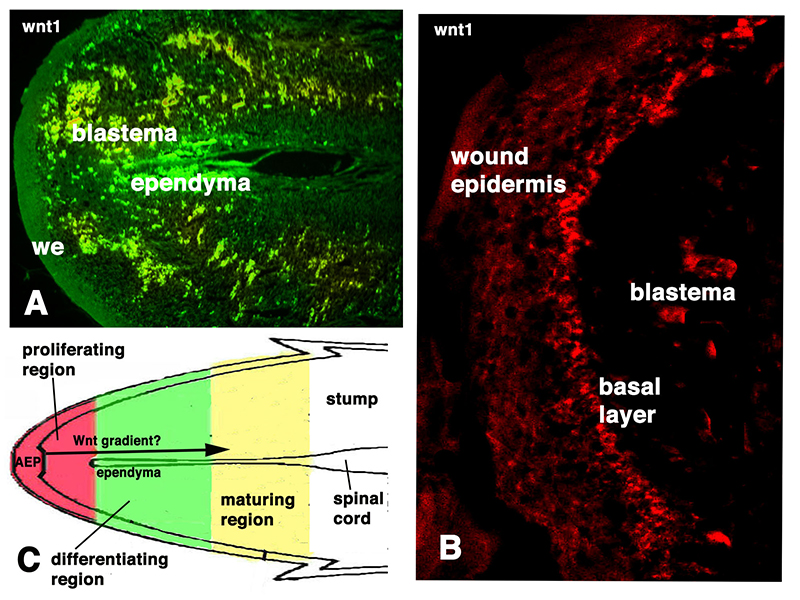 In conclusion, while in the lizard blastema Wnt genes likely play a role in directing successful regeneration of the tail, other genes avoid that it turns into a tumor. The future study on the role of specific Wnt genes should clarify their mechanism of stimulation on a regulated cell proliferation, their interactions with tumor suppressor proteins, and the promotion of a normal regeneration in lizards. Therefore, aside regeneration, the lizard blastema has become important for the study of cancer. It is hoped that this knowledge will be important in the near future to stimulate organ regeneration also in other terrestrial-adapted vertebrates, including humans, without inducing tumors.

Wnt-1 immunodetection in the regenerating tail of lizard suggests it is involved in the proliferation and distal growth of the blastema.
Alibardi L
Acta Histochem. 2017 Apr