Testosterone boosts aggression? Well, it depends who you are! 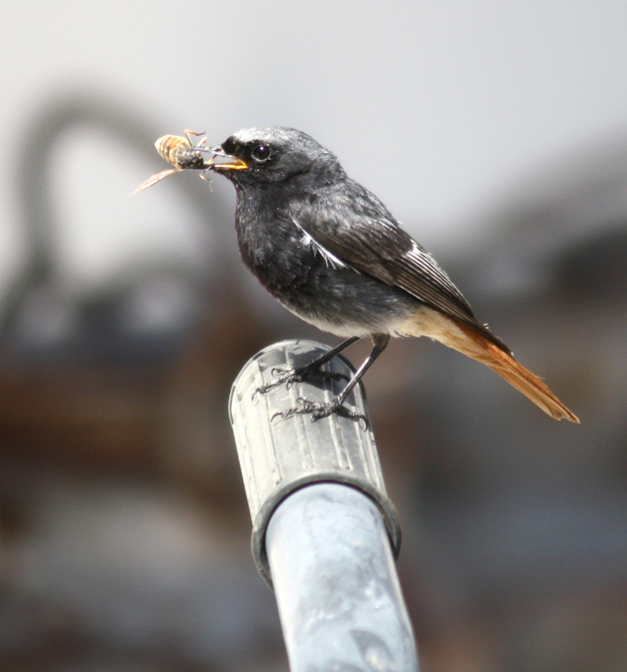 A male black redstart with food for his young © Beate Apfelbeck

We studied the black redstart, a bird that is different from many species studied so far, because it establishes a territory not only during the breeding season, but also outside a breeding context in autumn or winter. We simulated a natural increase in testosterone by injecting males with a hormone called gonadotropin releasing hormone, or GnRH, which is the hormone regulating testosterone production in all vertebrates. Essentially it is a testosterone booster, because it maximizes the testes’ production of testosterone. By injecting GnRH one can ramp-up testosterone production for a short period of time and observe the behavioral effects of this hormone surge. A control group of males was treated with saline injections that do not affect testosterone production. Half an hour after the injections, we simulated a territorial intrusion by placing a stuffed black redstart into the center of the territory of the treated male and played back black redstart song. This is about the maximum provocation you can do to a black redstart, comparable maybe to a stranger entering your house, opening the fridge, taking out a beer, and then sitting next to you on the couch to watch TV.

When we observed the reactions of the territory owners to the intruder we found that both GnRH-and saline-injected males behaved very aggressively. That means they fluffed themselves up like a little tennis ball, came very close to the intruder and finally even attacked it. But the intensity of the behavior did not differ between the two groups. So, in black redstarts, a rise in testosterone did not boost the aggressive behavior.

To us, this result was not so surprising because a set of previous results from our group had already suggested that testosterone is unrelated to territorial aggression in this species. But why is that so? In birds, the testes show large seasonal differences in size. In black redstarts they have the size of small beans during the breeding season, but they are hardly visible outside the breeding season. And of course such tiny testes do not produce testosterone. But because black redstarts aggressively defend a territory during most of the year they must have “invented” other mechanisms to regulate territorial aggression. We suspect that territorial aggression is hard-wired into the brain of black redstarts, and instead of using testosterone to boost territorial behavior, they may use a different hormone to suppress territoriality during the only time of the year, when they are not territorial, and that is during migration. Our work adds to the increasing evidence that we need a more differentiated view on hormones and how they affect behavior. Testosterone is mainly a reproductive hormone necessary for sperm production and for behaviors that are mainly expressed in a mating context. When a behavior such as territorial aggression is only expressed in a mating context, testosterone may regulate it. But when the behavior also occurs in contexts that are not connected to mating or reproduction, other mechanisms may control it. Hence, we really need to look at the specific contexts during which specific behaviors are expressed to better understand hormonal control mechanisms.