The antibacterials that have yet to be found

Science has contributed greatly to prolong the lifespan and health conditions of humans. However, close to the coming of age of the XXI Century, humankind is confronting the global war against infectious diseases. Leaving aside other microorganisms-associated diseases, the rate of annual mortality due to bacterial infections is up in the tens of millions, and tenfold more the number of non-lethal cases. The discovery and use of antibiotics to treat bacterial diseases helped survival of millions every year, but resistant bacteria appeared soon after. This was not a big problem in the 1960s and 1970s because new antibiotics were frequently introduced in the market. However, scientists have been worrying because not enough new antibiotics were developed, and research on new antibiotics dwindled: as an instance, the ‘10 X 20 initiative’, to develop 10 new antibiotics from 2010 to 2020 resulted, so far, in only two new molecules. One of the main problems found in the everyday practice of treating bacterial pathogen-associated diseases has been the steady emergence of multidrug-resistant bacteria. The 2015 report from the World Health Organization (http://www.who.int/mediacentre/factsheets/fs194/en/) states that ‘there are high proportions of antibiotic resistance in bacteria that cause common infections in all regions of the world. A high percentage of hospital-acquired infections are caused by highly resistant bacteria…’ The phrases ‘gloom scenario’ or ‘going back to the pre-antibiotic era’ have been heard, and medical authorities proposed alternatives to the classical use of antibiotics, among them the discovery of novel targets and drugs. 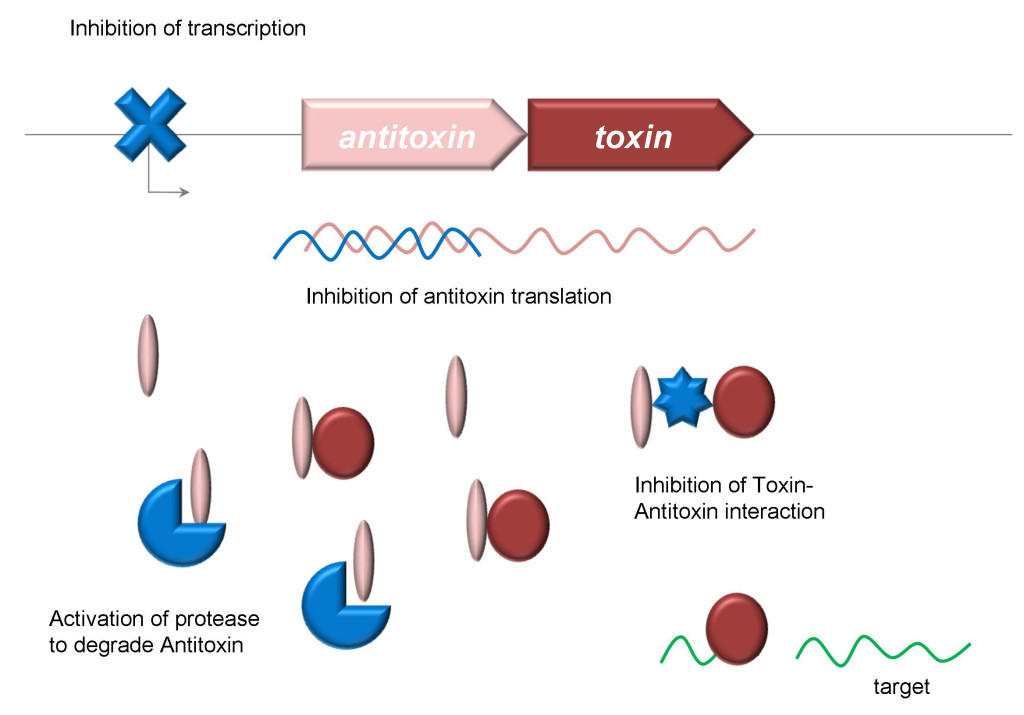 Fig. 1. Schematic representation of a type II Toxin-Antitoxin gene cassette and proposed ways of for the druggability of the system.

Within the above scenario we, among others, explored the possibility of using bacterial toxin-antitoxins (TAs) as candidates for drug discovery. Why TAs, especially type II TAs (the best known), could be potentially druggable? What TAs are and why are they interesting? Chromosomally-encoded Type II TAs are ubiquitous (spread among bacteria and archaea), redundant (up to 80 copies per bacterial chromosome in the case of the Mycobacterium tuberculosis), and absent in eukaryotes. TAs are composed by two-genes organized in such a manner that the antitoxin is synthesized first thus neutralizing the secondly produced toxin as it is being synthesized: this organization allows the antitoxin to counteract the toxicity of the cognate toxin by tight binding between both proteins. The result is an intracellular harmless T:A complex (Fig. 1.). When bacteria are subjected to stress (starvation, colonization of new niches, or response to external agents), TAs are triggered; the antitoxin is prone to degradation by proteases and the stable toxin is freed to exert its role resulting mainly in detention of bacterial growth. As a consequence, the bacterial population enters into conditions of ‘persistence’: the bacteria cease to be sensitive to antibiotics. A strategic question follows: if T:A association could be disrupted, could the released toxin be used as an antibacterial? Antiviral- and antitumoral activities of the toxins have been tested with promising preliminary results, but only by supplying the free toxin. Obviously, this cannot be a solution for bacteria because the underlying idea is to use the toxins as drugs against the pathogens. We proposed the design of drugs acting at different levels to test the druggability of the TAs, but all of them under the idea of augmenting the intracellular levels of stable toxins (Fig. 1.): i) drugs that inhibit transcription of TAs, so that the intracellular antitoxin is degraded releasing the already synthesized toxin; ii) design of antisense RNAs to inhibit synthesis of the antitoxin; iii) drugs that activate the bacterial proteases that will degrade the antitoxin, and iv) drugs that disrupt the protein (toxin)-protein (antitoxin) interactions. This latter strategy has been used with different purposes with excellent results, and was tested under laboratory conditions as to represent a promising future.