The discovery of an ancient symbiosis challenges a decades old paradigm

The vast majority of land plants form intimate nutritional partnerships with filamentous fungi wherein fungal-acquired mineral nutrients from the soil are traded for plant-generated organic carbon.  These mutualistic associations, known as arbuscular mycorrhizas (“tree-like fungus-roots”), are widely accepted as a key innovation allowing plant terrestrialization during the Ordovician period (ca. 475MYA).  The resulting colonization and greening of Earth’s land masses by plants symbiotic with fungi drastically influenced both the development of the terrestrial biosphere and the gaseous composition of the atmosphere.  This is a critically important topic in global ecology and evolution that has been gaining momentum for a paradigm shift since another widespread symbiosis was discovered in 2011. 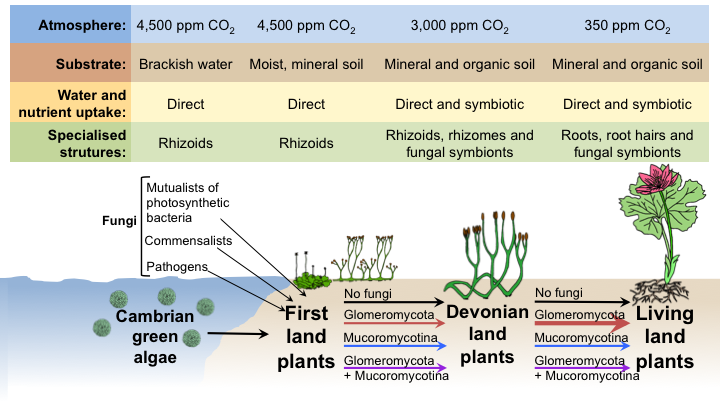 A model for the evolution of plant-fungal mutualisms leading to the greening of the Earth. Arbuscular mycorrhizas are formed with Glomeromycota fungi, and the newly discovered symbiosis with Mucoromycotina fungi.

The first studies on the morphology, physiology and evolution of the newly-discovered ancient symbiosis between plants and fungi reveal some convergences, as well as significant and intriguing differences, with the well-studied arbuscular mycorrhizas.  Differences include symbiotic responses to atmospheric carbon dioxide concentrations that changed drastically as a result of land’s conquest.  Such fundamental discoveries pave the way for comparisons with the signalling and developmental pathways whose study is now flourishing for arbuscular mycorrhizas.  Those advances are largely driven, in turn, by comparisons with closely related molecular pathways in better-understood and more evolutionarily recent symbioses between legume plants and nitrogen-fixing bacteria, and between parasitic plants and their plant hosts.  A new paradigm indicates that conquering land relied on a variety of plant-fungal symbiotic strategies still at work today.