The first medical school in America

The founders of first American medical school in Philadelphia, John Morgan and William Shippen, Jr, had received a fine medical education at the University of Edinburgh. As students, they discussed the need for such training in the American colonies. Shippen, who left Europe first, waited for Morgan to return, and was furious when Morgan, acting alone, proposed to the Trustees of the College of Philadelphia that they establish a medical school with himself as its founder and first professor. The competition and hostility between these two men was to last for the rest of their lives. 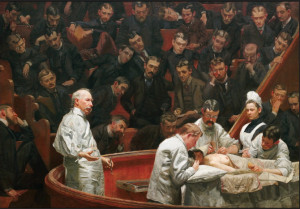 After Morgan had completed his plans for the school, he did appoint Shippen as professor, although clearly in a secondary role. Morgan taught the theory and practice of physic, while Shippen gave lectures on anatomy, surgery, and midwifery. The most famous of the subsequent professors was Benjamin Rush. Known for his dedication to his patients, Rush also worked to humanize the treatment of patients with mental illness, supported female education and racial equality, opposed capital punishment, and served as President of the Pennsylvania Society for Promoting the Abolition of Slavery.

The Medical College of Philadelphia offered two degrees, Bachelor of Medicine and Doctor of Medicine. For a Bachelor of Medicine degree, the student had to take one course of lectures in anatomy, materia medica, chemistry, the theory and practice of physic, and clinical lectures, attend the practice of the Pennsylvania Hospital for a year, serve an apprenticeship to “some reputable practitioner in Physic,” demonstrate his knowledge of Latin and mathematics, and pass a public examination.

Many students did not choose to fulfill all these requirements. They wanted the knowledge provided by the lectures but realized that success in practice would matter much more to their future careers than the mere possession of a medical degree. If they could avoid the onerous requirements of a degree, so much the better.

The faculty later modified the requirements for obtaining a medical degree. Students were now required to take two (identical) courses in each subject on the grounds that they would forget the information if they only heard it once but would be more likely to remember it if hearing the same thing a second time.

The Medical Hall used for teaching had an anatomical theatre had banks of seats arranged in a circular manner, so that every student would be able to see the anatomical demonstrations and dissections below. This arrangement is shown in Thomas Eakins’ painting of 1889 of Hayes Agnew directing a partial mastectomy with students watching attentively.

In advertising these facilities, university representatives emphasized the availability of a nearby Alms House Hospital in which a clinical professor, using the bodies of the poorer patients—who were wheeled in their hospital beds into a lecture hall—could do surgical operations and make clinical observations within the full view of the students.

The Flexner Report of 1910, Medical Education in the United States and Canada: a Report to the Carnegie Foundation for the Advancement of Teaching, was extremely critical of most medical schools but praised the University of Pennsylvania’s school for its fine laboratories, “deservedly famous” anatomical museum, “admirable library,” and “abundant” medical material at two dispensaries for the poor. The Medical School (then called a department) had clearly succeeded in becoming not only the first but one of the very best medical schools in America.