The history of carotid stroke

Carotid artery disease is a condition in which fatty deposition (plaque) within the vessel wall of one or both neck arteries causes progressive vascular narrowing. Plaque surface rupture leads to a shower of debris to the brain, the most devastating consequence of which is fatal stroke. This research analyses major relevant historical advances in the understanding of carotid stroke.

It was in Ancient Greece where the story of carotid stroke began. Hippocrates was the first to describe the carotids (from ‘karos’: to stupefy), and their importance was also highlighted by the art of his time. Both he and Galen understood that the hemiplegia (termed “paraplexy”) accompanying stroke (termed “apoplexy”) resulted from disease in the opposite side of the brain, but neither was aware of a link with diseased carotid arteries. 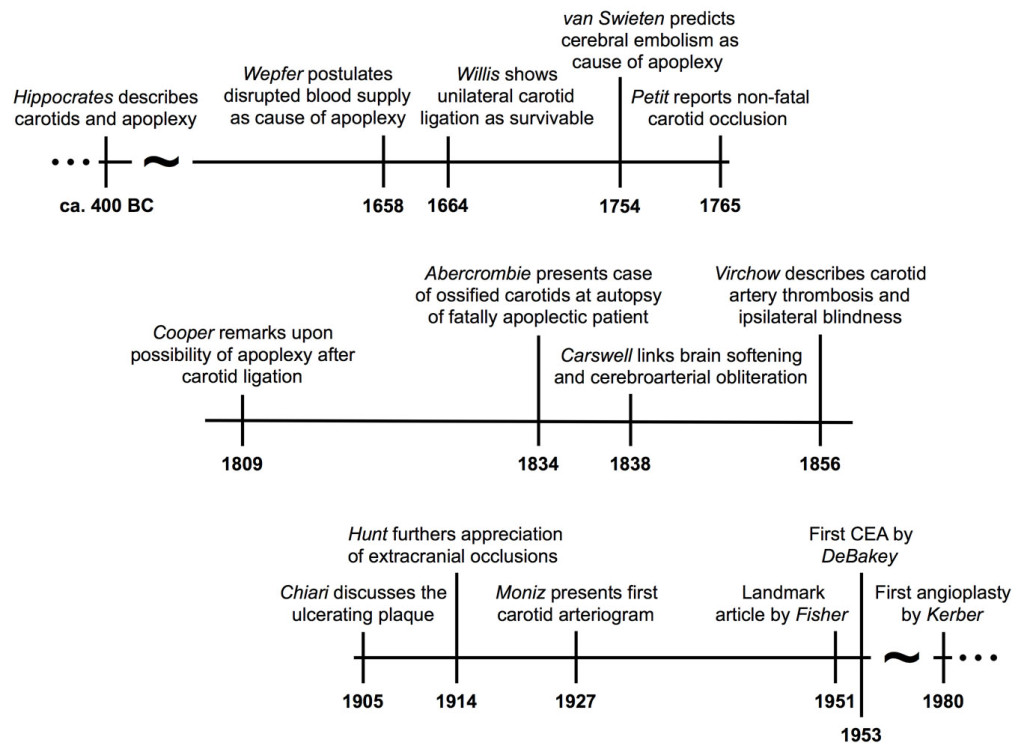 Landmark historical advances in the understanding of carotid stroke.

Despite Wepfer coming close to understanding the carotid connection in 1658, the great work of Thomas Willis averted the attention of the medical community from a cause for apoplexy outside of the brain. Willis, and later Jean-Louis Petit (of tourniquet fame), showed that tying off one carotid artery was survivable.

Two centuries later in 1856 Rudolf Virchow reported a case of in situ carotid artery clot associated with blindness of the eye on the same side, and in doing so realised the link between carotid debris, brain vessel blockage and stroke. Chiari was the first to show that a diseased carotid artery was a prominent source of stroke-inducing cerebral debris in 1905, and soon after Ramsay Hunt identified that both blockage and narrowing of the carotid artery could induce clinical symptoms of stroke.

The story of understanding carotid stroke was propelled forward when C. Miller Fisher published his 1951 and 1954 landmark articles on occlusive disease of the internal carotid arteries, which led him to prophesize that “some day vascular surgery will find a way to by-pass the occluded portion of the artery during the period of ominous fleeting symptoms”. These paved the way for modern surgery to remove the fatty carotid plaque or to stent over it to prevent future stoke in those experiencing warning symptoms such as temporary blindness or loss of function of half the body.