The impact of climate conditions on Cutaneous Leishmaniasis incidence

Cutaneous leishmaniasis (CL) is a vector-borne disease transmitted by the bite of an infected adult female sandfly. The female sandfly acquires Leishmania parasites in the blood meal intake on an infected mammalian host in order to obtain the protein necessary to develop eggs. Inoculation of parasites occurs once the infected sandfly bites an exposed part of the human body, usually, it concerns face, neck, arms, or legs. Once in the human host, parasites convert into amastigotes and multiply in cells of the mononuclear phagocyte system, hindering thereby the immune defence mechanisms of macrophages. Succeeding to the incubation period, which lasts few weeks to months, depending on human’s immunological status, an erythematous papule or nodule appears at the site of the sandfly bite causing skin sores. The healing process typically results in atrophic scarring. After recovery or successful treatment, CL induces immunity to reinfection by the species of Leishmania that caused the disease. Currently, there are no vaccine or drugs to prevent infection by parasites; the protection from sandfly bites remains the best way to prevent the infection. Among personal protective measures in endemic regions : minimize nocturnal outdoor activities from dawn to dusk, wear appropriate clothing, and apply lotion, liquid, or spray repellent to exposed skin. Proper bed nets give also good protection against sandfly bites. 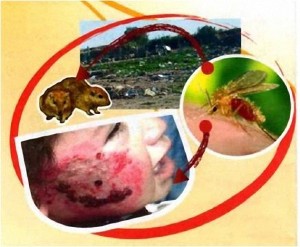 Cutaneous leishmaniasis, also called Biskra boil, represents an actual public health problem in Algeria; it being the world’s second largest focus after Afghanistan. The surveillance of the disease is based on a passive system ; recording of cases and standardization of treatment are the main actions undertaken by health authorities in addition to sandfly control, which consists of insecticide campaigns. Neither analysis nor interpretations of the data were undertaken in designing intervention strategies.

The present study aims to strengthen the surveillance system put in place to assist public health services in preparing for any unusual situation that may occur in the future. Mathematical and statistical modeling has been demonstrated as a crucial tool for the development and evaluation of control strategies. More precisely, the statistical approach using time series analysis based on the Box-Jenkins method has been established as a major tool for interpreting and analysing surveillance data, and most importantly, for generating estimates of the variability to be expected among future observations. 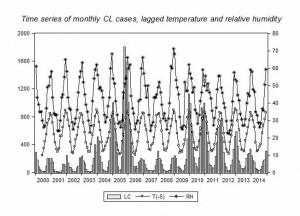 First, we have examined the relationship between climate factors and the number of cases of CL in Biskra province, the largest focus of CL in Algeria, recording every year the highest incidence of CL in the country. Then, we carried out a time series analysis based on the Box-Jenkins method to fit an autoregressive moving average (ARMA) model incorporating climate factors to the monthly recorded CL cases from 2000 to 2009 in Biskra province. Our results showed that ARMA models produce reliable models for prediction of CL cases provided that climate variables are available. The fitted ARMA model was adequate in predicting the monthly number of CL from January 2010 to December 2014.  The linkage between CL and weather conditions was demonstrated showing that the temperature had the highest effect followed by relative humidity. This is an important step towards understanding the impact of weather factors on the disease and suggests that climate change will have important implications for human health.

Our findings are optimistic for forecasting CL cases by means of routine data collection within the existing surveillance system and climate information. The usefulness of forecasting of expected cases consists mostly in giving decision makers a clearer idea of the variability to be expected among future CL cases. Hence, could assist public health services in preparing for the future and also could support the design of intervention strategies.