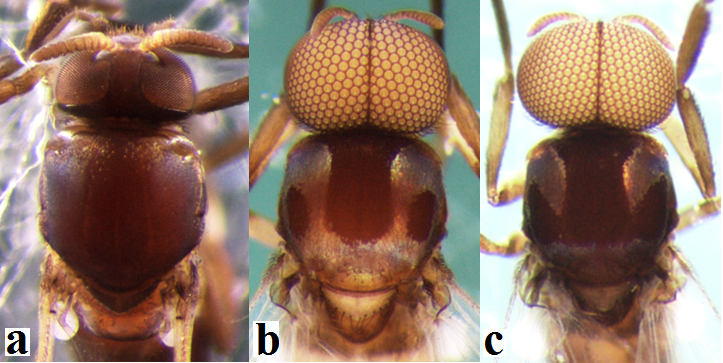 At first, these two male forms were thought to represent two different species because so distinct is the difference between two forms in the thoracic color pattern and number of upper-eye facets, both of which are key characters often used to separate one species from another. However, the pupae of these two forms of males are morphologically indistinguishable from each other, and always live together in the same aquatic habitats (Black flies pass their life in clear running streams or rivers at egg, larval and pupal stages). Coupled with these observations, the fact that there was only one form of the females that emerged from the pupae strongly suggested a single species composed of two male forms and one female form. Finally, it is proved that these two male forms belong to the same species by using a DNA sequence-based analysis.

In most groups of insects including black flies, female and male adults are morphologically differentiated (e.g., head and thorax of the female black fly as in Fig 1a; those of the males as in Fig 1b, c) but two or more forms in one sex are a very rare phenomenon, though it is known to occur in certain species of beetles and social insects such as ants. In the family Simuliidae (2,204 species recorded in a world list), to which this species belongs, the male thoracic color pattern, if any, is monomorphic (one pattern in one species), though rarely polymorphic (two or more patterns in one species). Even in such rare polymorphic cases, no linkage of any one of different thoracic color patterns with the certain number of upper-eye facets or other characters has been reported.

Further studies are needed to determine the frequency of occurrence of each male form in each location and underlying genetic mechanisms of this phenomenon. How the difference in the number of male upper-eye facets and thoracic color patterns affects the male and female mating behavior, and whether the possession of two male forms is advantageous to the survival of this new species remain to be studied.