One way of self-regulating protein synthesis by animals is suppression of the relevant messenger RNA (mRNA); molecules that translate into amino acids and act as building blocks for protein. The mechanism, called RNA interference (RNAi), works by attaching the complementary RNA molecules to the target mRNA and causing its failure to translate to the protein. This phenomenon can be exploited to suppress or knockdown the genes of interest in order to stop protein synthesis. If the suppressed gene is vital for the organism, it may result in its mortality or developmental arrest. The RNAi phenomenon has been used to study gene function or to kill pests (e.g. insects), as the suppression of a particular gene may reflect on organism’s physiology and morphology. But delivery of complementary RNA molecules to the target organism in order to suppress the desired gene has been a challenge. 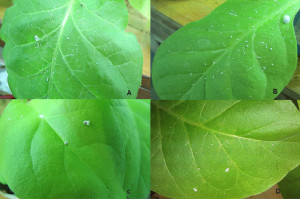 Different methods, including use of a vector organism, have been evaluated for the delivery of complementary RNA to the pest organisms to control them by knockdown of their vital genes. In one such studies, potato virus X (PVX) was used to deliver RNA molecules to solenopsis mealybug, a pest of agricultural importance, to suppress chitin synthase gene (CHS). CHS is involved in formation of cuticle, the external layer which plays role in development and protects insects from damage and water loss. A fragment of CHS, isolated from mealybug, was transformed into PVX virus to develop “transgenic virus”. The transgenic PVX was used to inoculate healthy tobacco plants to multiply the virus, which in turn multiplies the incorporated mealybug CHS and produce complementary RNA. Healthy mealybugs were fed on the PVX-inoculated plants (to deliver RNA complementary for CHS). This resulted in RNAi action, causing the suppression of CHS gene in the mealybug which either killed or physically deformed the feeding insects.