A central doctrine for a gene expression is typically from the DNA coding sequence to the RNA transcript and then to the protein. So, the normal function of a gene can be disrupted by suppression, or so-called “silencing” of a gene, by transcript cleavage. It turns out that such a silencing has become an effective way to study a gene function and even to help improve crop traits. This is because reduced or loss of a gene function through gene silencing could be correlated to the phenotype of the plant in study and for trait utilization when the trait is controlled by the gene. Conventional approach to achieve silencing is to employ a genetic construct that carries a transgene expression unit to silence one gene at a time. However, as the number of genes increases, the difficulty in silencing these genes simultaneously become skyrocketing as multiple transgene expression units have to be deployed, imposing challenges in assembling these units into a genetic construct and promoting unwanted interactions among the multiple expression units. 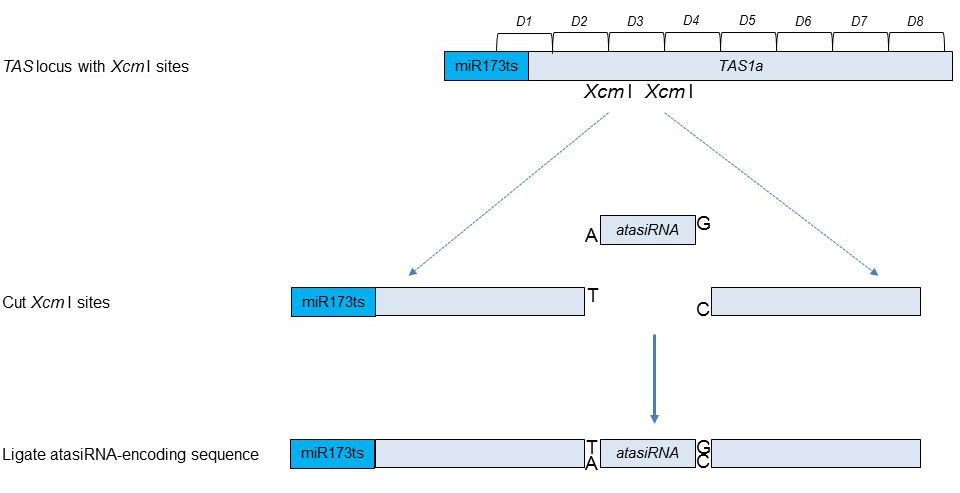 Fig. 1. Schematic presentation of TC-cloning technology for employing atasiRNA. Two Xcm I sites can be incorporated into two proper locations of TAS (trans-acting small RNA) locus. Restriction digest will generate T- and C- protruding ends at Xcm I sites to receive incoming 21-bp DNA encoding atasiRNA which can be synthesized as two separate, reverse complementary single-stranded DNA with one nucleotide A- and G- protruding ends. Blue box shows mature miR173ts (as example) as a trigger sequence to trigger the production of phased 21-bp atasiRNA upon cleavage. Brackets D1 to D8 indicate registrar positions from which atasiRNA will be generated. Middle and bottom drawings show Zoom in of TC-cloning sites.

Recently, artificial trans-acting small interfering RNA (atasiRNA) has emerged as a potent and specific gene silencing platform. This technology not only enables to silence multiple genes simultaneously with a minimal number (1-2) of transgene expression units than conventional approach but also minimizes risk of silencing unintended gene. Mechanistically, multiple 21-bp long atasiRNA transcript species are generated from a plant endogenous trans-acting small RNA locus (TAS) or from a genetic construct carrying TAS locus that is integrated into the plant genome. A key to utilizing atasiRNA technology is to identify each 21-bp atasiRNA species which needs to be potent and specific enough to cleave its target gene transcript. To do this one practical approach is to identify a list of top candidate 21-bp RNA using online small RNA prediction program. Once these candidate atasiRNAs are found, each of them needs to be validated in vitro or in vivo to determine which one is the most effective. This process requires intense work to clone each of a list of short DNA encoding a 21-bp atasiRNA into the TAS locus. It would be challenging and cost-ineffective to achieve this using conventional cloning approach. To overcome this bottleneck, we developed TC-cloning technology which allows highly efficient and directional cloning of each 21-bp DNA encoding the atasiRNA into the TAS locus. The ability to ensure the directionality of 21-bp atasiRNA in the TAS locus is important to secure potent gene silencing. The key to the success of this TC-cloning is to generate T- and C- single nucleotide protruding ends by incorporating the restriction site Xcm I into the TAS locus. Xcm I sequence is versatile enough to allow generating of T- and C- ends. The high efficiency and fidelity of TC-cloning has made it possible to utilize atasiRNA silencing platform by cracking the bottleneck in cloning very short 21-bp atasiRNA-encoding DNAs (Fig. 1).

Finally, this new technology should be instrumental to plant biology study and trait stacking for crop genetic improvement.