The genome can influence the onset and the development of the diseases in several manner, and in the last years several studies have revealed the new role of the DNA methylation in this framework.

The DNA methylation is a mechanism that occurs by the addition of a methyl (CH3) group to DNA, thereby often modifying the function of the genes. This kind of mechanism (called epigenetic mechanism) does not change the DNA sequence but can alter how genes are read by cells. It can be caused by external or environmental factors. 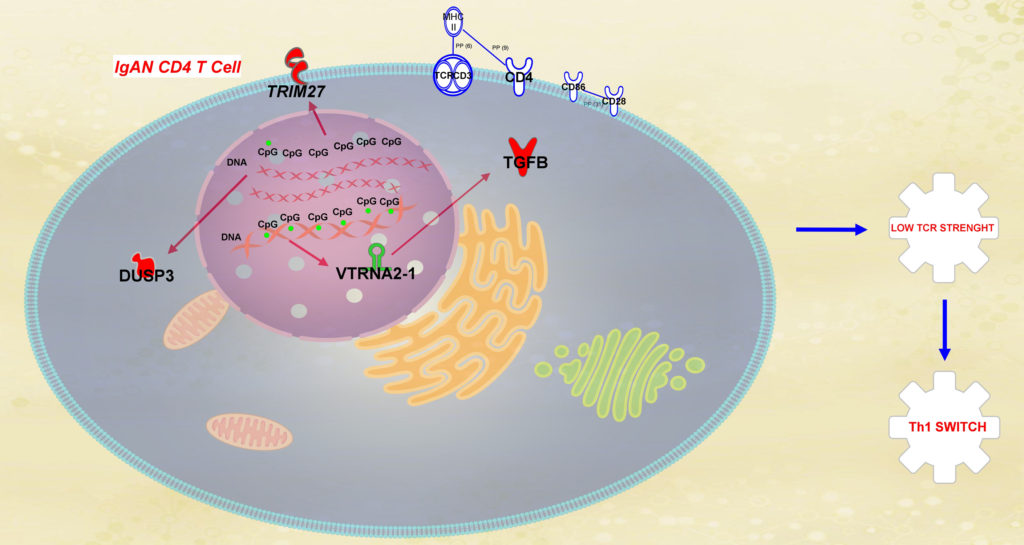 Aberrant DNA methylation in IgAN patients influences the expression of some genes involved in the T-cell receptor signalling, the pathway that transfers the signal of the presence of antigens and that activates the T-cells. In particular, the hypo-methylation of TRIM27 and DUSP3 and the hyper-methylation of VTRNA2-1 lead to the overexpression of TGFβ and to a reduced TCR signal strength of the CD4+ T-cells, with a consequent T helper cell imbalance.

In somatic cells, the methylation arises in correspondence to a CpG site, in which a cytosine nucleotide is located next to a guanidine nucleotide.When the promoter region of a gene is methylated, the expression of the gene is repressed.

The number of diseases influenced by the DNA methylation is progressively rising and comprises many common diseases such as schizophrenia, Alzheimer’s disease, diabetes, atherosclerosis, cancer, and so on.

The DNA methylation can be an important factor influencing also the IgA nephropathy (IgAN), that is the most common form of primary glomerulonephritis worldwide and has a strong genetic component. We performed a genome-wide screening for DNA methylation in CD4+ T-cells from IgAN patients in comparison with healthy subjects (HS). CD4+ T cells are particular cells of our immune system that are activated by antigens and are critical in the control of the antigen-driven adaptive immune response. Since the IgAN is an immunologically mediated disease, the CD4+ T-cells can influence this disease.

We found that the DNA methylation in IgAN patients influences the expression of some genes involved in the T-cell receptor signalling, the pathway that transfers the signal of the presence of antigens and that activates the T-cells. In particular, we found two genes, TRIM27 and DUSP3 hypo-methylated in correspondence of the promoter region that regulates their transcription. Effectively these genes, are up-regulated in CD4 T cells of IgAN patients. 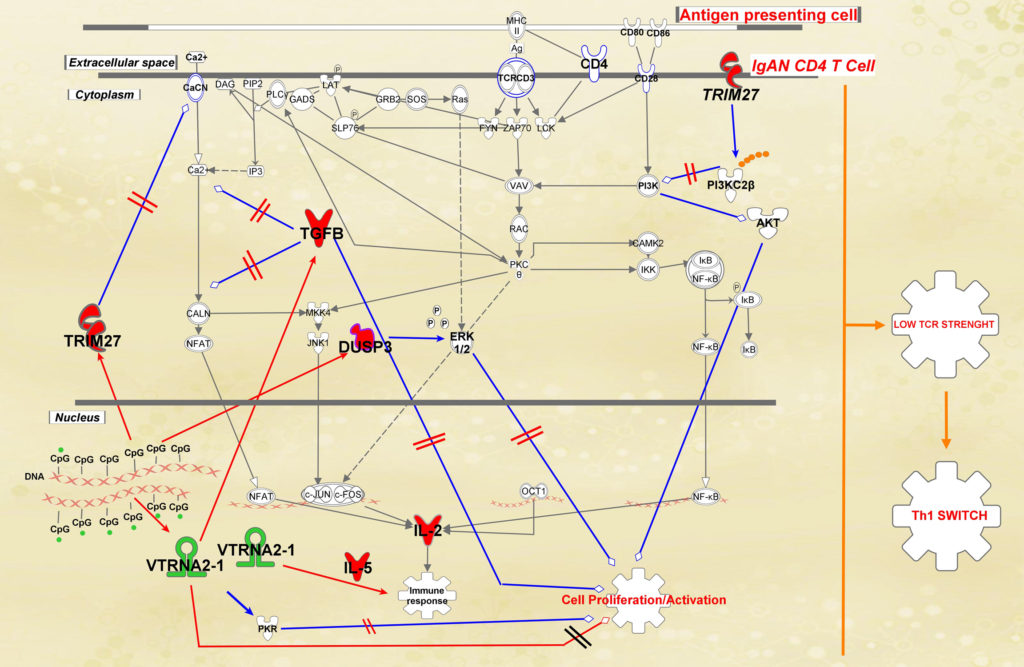 DNA regions coding for DUSP3 and TRIM27 were hypomethylated in CD4+ T-cells of IgAN patients and led to overexpression of the encoded genes. DUSP3 dephosphorylates and inactivates ERK1 and ERK2 that are involved in cell growth, proliferation and survival. TRIM27 functions as a RING E3 ubiquitin ligase that decreases PI3K enzyme activity through the polyubiquitination of PI3KC2β (orange circles). It also negatively regulates CD4+ T-cells by inhibiting KCa3.1 channel activity and TCR-stimulated Ca2+ flux. At the same time, the DNA region encoding the VTRNA2-1 nc-RNA was found to be hypermethylated leading to its down-regulation. In turn, following CD3/CD28 TCR stimulation, the lower levels of VTRNA2-1 cause a decrease in the CD4+ T-cell proliferation, plausibly through the activation of the interferon-inducible kinase PKR. The lower VTRNA2-1 levels also increase the TGFβ expression that, together with DUSP3 and TRIM27, impairs CD4+ T-cell proliferation and activation, reducing the effect of the CD3/CD28 activation. TGFβ, together with TRIM27, can also hamper the early steps of T-cell activation by reducing the Ca2+ fluxes. This deregulation causes a reduced TCR strength and a T-cell anergy-like status. The lower activation of CD4+ T-cells and the lower TCR strength can determine, in some biological settings, Th1 polarization with higher IL-2 production. Red lines represent connections directly demonstrated in the present study. Blue lines represent connections from other studies, as referenced in the discussion. The green and red shaded symbols indicate respectively down- and up-regulated components found within the pathways.

Moreover, in the chromosome 5 we found the VTRNA2-1 gene region strongly and extensively hypermethylated. VTRNA2-1 belong to a novel class of non-coding RNA (nc-RNA) called vault RNA (VTRNA). As a consequence, the VTRNA2-1 expression level is significantly lower in CD4+ T-cells of IgAN patients. Thus, the hypermethylation of the VTRNA2-1 nc-RNA led to a decreased CD4+ T-cell proliferation.

In addition, this hypermethylated gene led also to the overexpression of TGFβ (transforming growth factor β). This is an important aspect of IgAN pathogenesis, since TGFβ1 plays a role in the immune-complex deposition at renal level, that is typical of this disease.

Besides, we found an  imbalance of the T helper cells 1 and 2  in IgAN patients. The T helper cells modulate the immune response through their balance. This could be explained by the reduced TCR signal strength of the CD4+ T-cells and by their anomalous response and activation caused by the aberrant methylation.

In conclusion, this study reveals new molecular mechanisms underlying the abnormal CD4+ T-cell response in IgAN patients. The aberrantly methylated DNA regions of CD4+ T-cells in IgAN patients provide a means to better understand the molecular mechanisms involved in this disease and open up new perspectives in potential novel therapeutic targets for the treatment of the IgAN.