Activation: a double-edged sword for Treg

Regulatory T cells (Tregs) are a specialized subset of T cells. As the name suggests, they play a role in controlling and regulating other immune cells. Tregs, characterized by the expression of the forkhead/winged-helix transcription factor Foxp3, are generated either in the thymus (tTregs) or in periphery (pTregs). Sustained expression of Foxp3 in Treg is essential for both the identity and suppressor function of Tregs. Previously, we discovered that Tregs could turn off the expression of Foxp3 and undergo reprogramming into other T effector subsets. This conversion from immune-suppressing cells to immune-boosting cells has important implications for understanding the pathogenesis of various autoimmune disease and allergies and might provide a new strategy to fight the tumor. However, whether thymus-derived tTregs are capable of downregulating Foxp3 remains unclear. 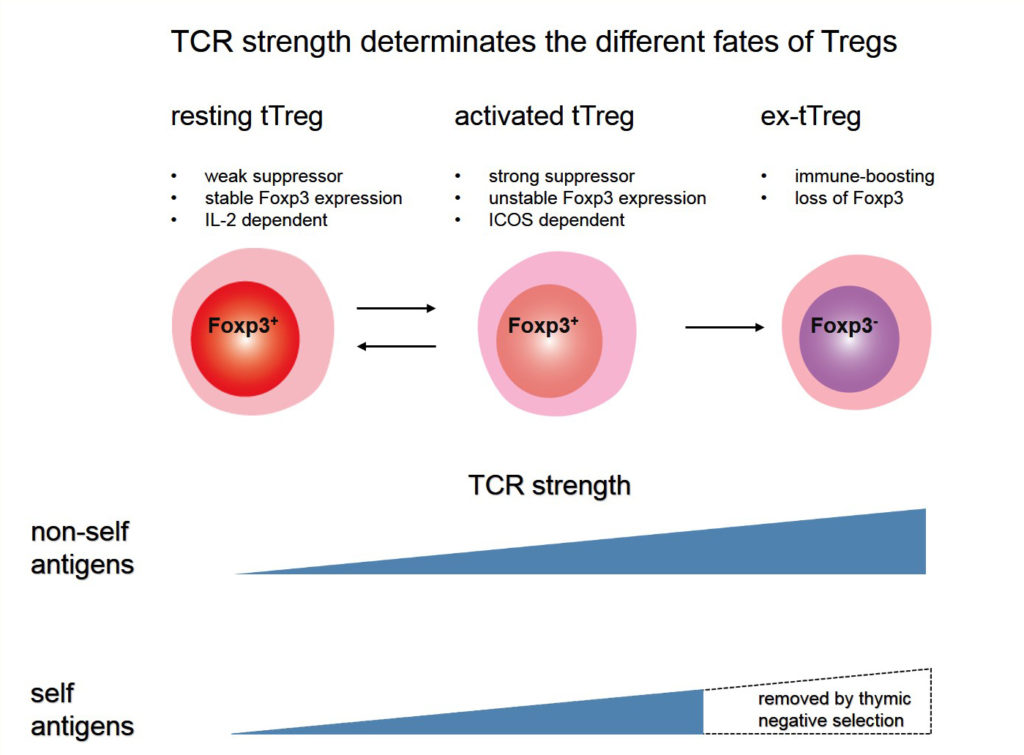 Recent results have suggested that conserved non-coding DNA sequences 1 (CNS1) within the Foxp3 gene locus is critical for the generation of induced pTregs but dispensable for tTreg development. Thus, we developed a Foxp3 ΔCNS1-Cre mouse reporter strain that allowed for identiﬁcation and lineage tracing of tTregs by labeling them with Thy1.1. Phenotypic analysis of this transgenic mouse showed that the reporter Thy1.1 labeled the mature and epigenetically committed tTreg cells in the thymus. By using this novel tTreg fate-mapping mouse, we found that only ~ 1% of mature tTregs lost Foxp3 expression in secondary lymphoid organs, indicating that tTregs are stable under homeostatic conditions. However, TCR engagement and sequential functional specialization of tTregs led to the generation of Foxp3 instability and reprogramming into T helper lineage. We further demonstrated that the signal switch from IL-2 to ICOS during Treg activation induced Treg instability and reprogramming. Finally, using a dual lineage tracing mouse model in which genetic tracing of Foxp3 and T-bet was simultaneously enabled, we demonstrated that T-bet expression by effector Tregs was unstable. Effector T-bet-positive Tregs that had lost T-bet expression reverted to a resting like Treg phenotype and stabilized Foxp3 expression. Together, our study demonstrates that TCR activation is a double-edged sword for Treg. The activation process is essential for Tregs to gain potent inhibitory activity; however, over-activation can promote conversion of Tregs from immune-suppressing cells to immune-boosting cells.

Here, we propose a model suggesting that the signal strength and/or duration of Treg activation determine the different fates of effector Tregs (i.e., immune suppressing vs. immune boosting). Both conventional T cells and tTreg are generated in the thymus and educated by an elaborate process during which the duration and strength of interaction between TCR and self-peptide-MHC complexes on APCs determine the fate of the T cells. Most thymocytes that bind with high affinity undergo clonal deletion to limit autoimmunity in the periphery. However, some self-agonist ligands with medium high affinity preferentially develop Tregs, which is the alternative insurance of the organism against auto-reactivity. Both conventional T cells and tTregs have the potential to recognize foreign antigens in the periphery. For conventional T cells, high affinity TCR-MHC engagement may preferentially generate dominant T cell clonal expansion to combat infection. However, similar TCR-MHC engagement in tTregs may induce strong ICOS/PI3K signaling that is detrimental to Treg suppression activity and terminates Foxp3 expression. Because high affinity self-peptide-MHCs are deleted during thymic negative selection, the relatively weak self-peptide-MHCs may provide a ‘just right’ activation window for tTregs. This model may explain a commonly observed phenomenon in which Tregs prefer to suppress relatively weak immune responses while being relatively inefficient to control strong immune responses such as to allo-skin grafts.