Phosphorylation of proteins is one of the most important mechanisms through which protein function is quickly and reversibly regulated. Prototypically, an extracellular ligand binds to its cognate receptor(s) on the surface of a target cell, leading to activation of this receptor. This in turn initiates a chain of intracellular reactions provoking a specific response. Some cell surface receptors act as receptor protein-tyrosine kinases, which after activation phosphorylate their substrate proteins on tyrosine residues. These receptors commonly share a similar structural organization consisting of an N-terminal extracellular ligand-binding domain (LBD), a single transmembrane region (TMD), and a cytosolic C-terminal domain harbouring the protein-tyrosine kinase activity (KD). Once activated, they can multiply their signals by triggering the phosphorylation of a group of downstream kinases that become activated by phosphorylation at unique or multiple serines/threonines and/or tyrosines. 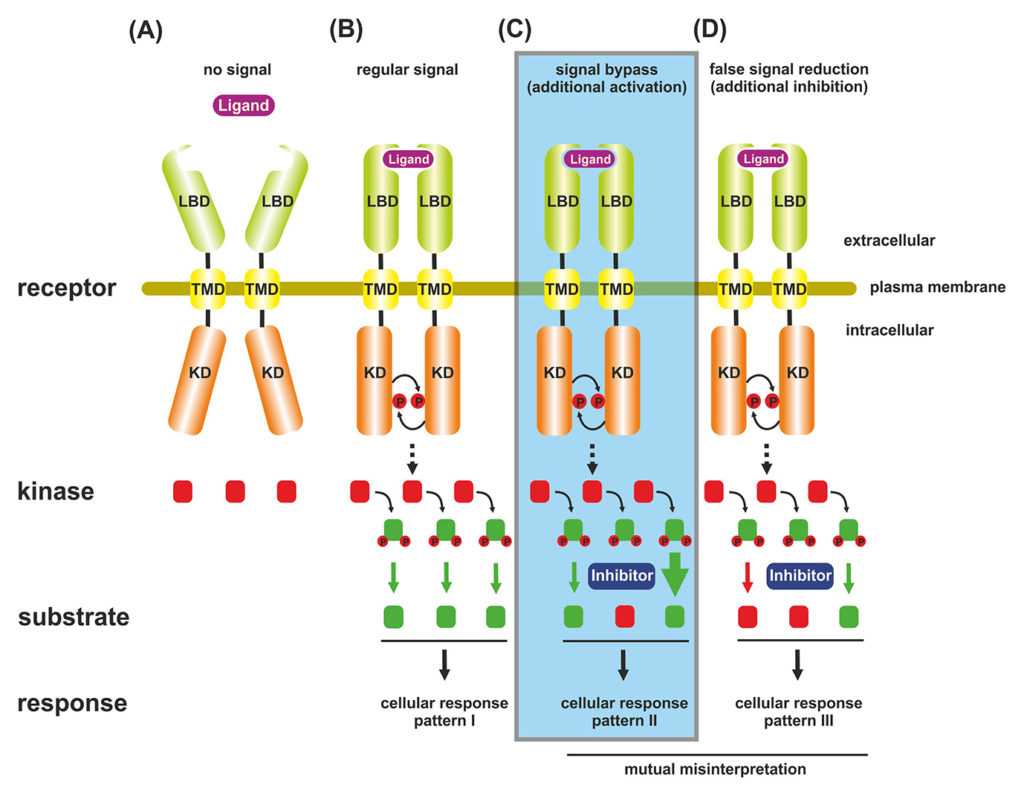 Fig. 1. Activation by inhibition. (A) A receptor typically consists of an extracellular ligand-binding domain (LDB), a transmembranal domain region (TMD), and a kinase domain (KD). Without ligand binding, the kinase is inactive and not able to initiate signalling to downstream kinases. (B) After ligand binding and activation, the receptor might simultaneously lead to activation of different kinases. (C) Inhibition of one of these kinases by a specific inhibitor can provoke increased activity of other kinases becoming stimulated by the same activator. (D) Due to interfering with a common kinase function, the inhibitor might not only block the kinase of interest but also related kinases. As a consequence, this might lead to mutual misinterpretation of experimental results.

In a hypophosphorylated state, these kinases are catalytically inactive and the phosphorylation at specific activation loops induces conformational shifts locking their activity domains in catalytically competent conformation. One group of these downstream kinases is formed by mitogen-activated protein kinases (MAPKs). They become activated by a number of different receptor triggered signalling cascades. These include the one initiated by the platelet-derived growth factor receptors (PDGFR), which assemble dimers upon binding to its ligands such as PDGF-BB. The activated receptor phosphorylates itself (autophosphorylation) and downstream protein kinases which in turn activate MAPKs. MAPK signalling is of great biological importance because they regulate most cellular functions including proliferation, inflammation, apoptosis, migration, differentiation. Therefore, MAPKs are interesting drug targets and a number of therapeutic inhibitory agents (small molecule inhibitors) have been developed targeting specific MAPKs. Nevertheless, one of the drawbacks of those inhibitors is the fact that they target common kinase functions, e.g. ATP binding. Therefore, it is difficult to create an inhibitor which is specific for a particular kinase.

In our view, this unexpected finding is of fundamental importance for the interpretation of results generated in studies using inhibitors. Numerous previous reports uncritically applied MAPK inhibitors. In some studies it was concluded that one individual MAPK is causally involved in the mediation of a biological effect when it can be blocked by a “specific” inhibitor targeting precisely this MAPK. However, considering the fact that inhibition of one MAPK can lead to activation of other MAPKs, some of these former studies have to be critically challenged. Moreover, in our experimental setting, several different small-molecule MAPK inhibitors induced concurrent activation of other MAPKs. This finding suggests “activation by inhibition” to be a widespread phenomenon that applies to many inhibitors. In addition, the fact that the perturbation of a signalling network at a specific point impacts other interrelated components of this biological regulatory system demonstrates the complexity of such systems. Furthermore, it confirms the notion that pharmacological treatment can cause side effects, which at first glance may appear unexpected or even counterproductive.

Although we actually do not know if the mutual “activation by inhibition” is limited to the MAPK network, we think our observations must be critically kept in mind when interpreting experimental results mediated by a “specific” inhibitor.