The treatment of age-related diseases is a high-priority issue in modern western societies, mainly because of the progressive ageing of the population and the increase in life expectancy. Osteoporosis, literally “porous bone”, is a condition in which the bone mineral density is reduced, the microarchitecture deteriorates, and the amount and variety of proteins in bone tissue are altered, leading to an increased risk of fracture. In Europe in the year 2010, twenty two million women and 5.5 million men were estimated to be affected by osteoporosis, and the total projected health care cost is expected to exceed 46 billions € in 2025. The research in the bone medication field and in the development of new and efficient strategies for the cure of bone diseases is therefore becoming more and more relevant. 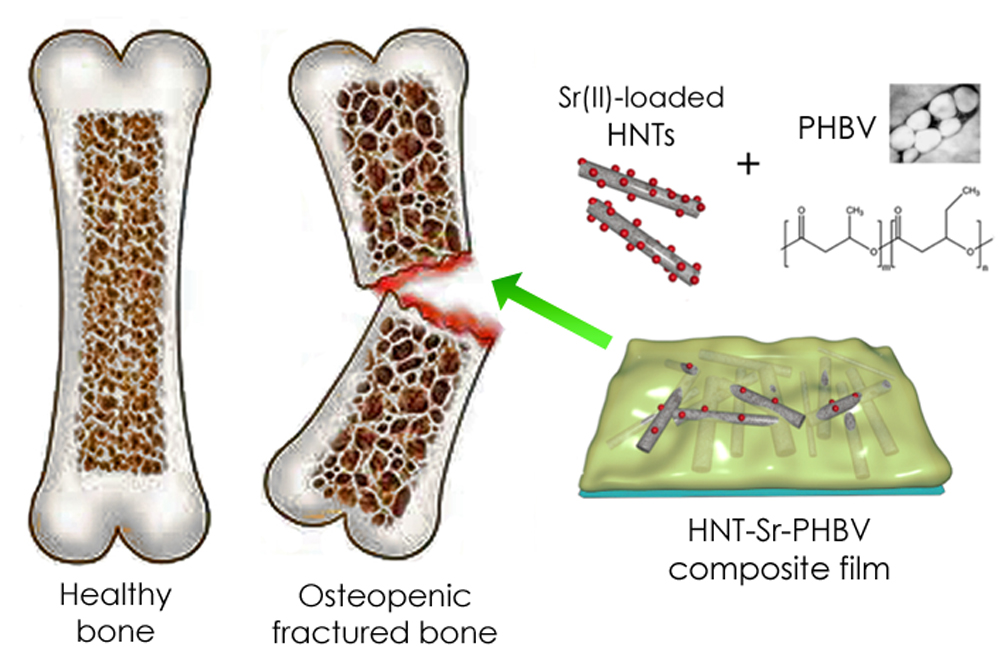 Generally speaking, the medical treatment of osteoporosis is aimed at restoring the normal bone metabolism, i.e. the optimal equilibrium between bone resorption and formation in the body. Strontium(II), for instance, is known to promote the deposition of new bone tissue thanks to the stimulation of calcium(II) receptors and differentiation of pre-osteoblasts to osteoblasts, while at the same time it inhibits the formation of osteoclasts. Strontium-based drugs have been widely prescribed over the last decades (Protelos/Osseor®), but when Sr(II) is orally administered at high doses it could also increase the risk of heart attack, with the result that the European Medicines Agency has recently restricted the use of these drugs.

Rather than through its systemic administration, it is therefore crucial to deliver strontium(II) at the treatment site, so that its bioactivity could be locally exploited, without the collateral effects that have restricted its use. In our vision, a possible carrier for Sr(II) is represented by a synthetic graft matrix constituted by halloysite nanotubes and a biopolymer. Halloysites (HNTs) are a class of natural clays with the same chemical composition as kaolinite and a tubular morphology, closely resembling that of multi-walled carbon nanotubes.  Their lengths range from ~100 nm to several μm, while the inner diameter is within 15 and 100 nm, depending on their provenance. HNTs combine outstanding mechanical properties with the ability to upload small molecules either within their hollow lumen or onto their surface through cation exchange. In this paper we show for the first time that HNTs could be used as vectors for Sr(II) ions, which are known to be effective for the in situ stimulation of bone tissue regeneration. The use of a degradable biopolymer (3-poolyhydroxybutyrate-co-hydroxyvalerate) coating allows for the progressive exposure of the embedded inorganic matrix to the physiological environment, and for the modulation of its interaction with osteogenic cells. The in vitro biocompatibility of the composite scaffold was demonstrated by cytotoxicity tests on fibroblast cells, and its mechanical properties were evaluated through nanoindentation experiments (measured compressive strength of ~50 GPa). Thanks to proper thermal characteristics, the composite material can be easily processed and possibly used use in several treatments of bone defects or diseases. For example, it could be applied as a filmable coating to enhance the bone regeneration capacity of synthetic bone grafts or it could be fabricated as a self-standing biomaterial.