Control of plant architecture by gravity

Plants are permanently tethered to the soil and thus, unlike animals, they cannot physically escape from harmful situations. Instead, they have evolved mechanisms to adapt their growth to an ever-changing environment. A simple example of this phenomenon, which you might all have experienced, is observed when growing plants next to a window. You might have seen that plants bend towards the window, which in this particular case, is their source of light. The reorientation of plant growth towards or away from a given stimuli is known as tropism, and the stimuli can be as diverse as light (phototropism), salt (halotropism), water (hydrotropism), touch (thigmotropism) or gravity (gravitropism) (Fig. 1). 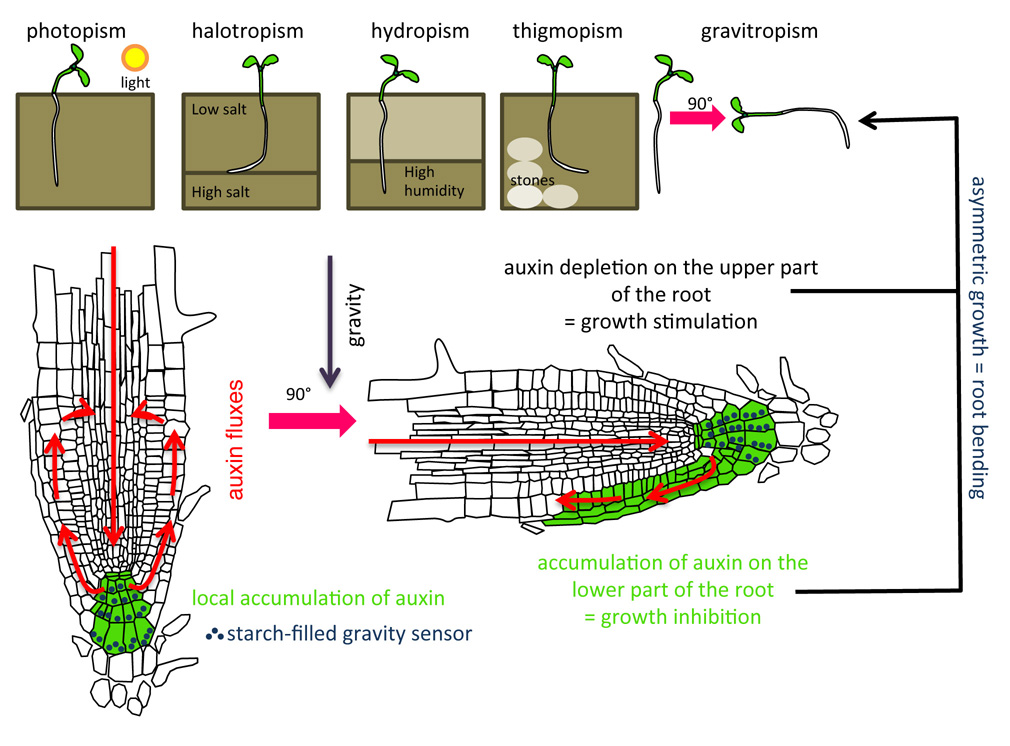 Fig. 1. Various tropisms affecting plant architecture. At the top, cartoon representing various tropisms and how they impact root and/or shoot architecture. Bottom, schematic representation of the tip of a plant root before gravistimulation (vertically grown plants, left) or after gravistimulation (rotation of the plants by 90°, right). Auxin fluxes are represented by red arrows and the sites of auxin accumulation are shown in green.

All this growth responses are meant to maximize plant fitness. Moreover, tropic growth is not only an adaptive mechanism but, it also determines plant architecture per se.  Gravity is a major environmental factor that shape plant architecture. Indeed, plant shoots grow upwards against the gravity vector (negative gravitropism) and roots downwards into the soil towards the gravity vector (positive gravitropism). Gravity also determines the arrangement and orientation of lateral shoots and lateral roots, which is important to optimize light absorption and, water and nutrients uptake respectively. While it is difficult to experimentally change the orientation of gravity in the lab; we can tilt the plants and analyze how each organ react to this relative change in gravity (Fig. 1). If you tilt a plant horizontally, the root tip bends downward towards the new gravity vector, while the shoot bend upward, away from gravity. Depending of the species this process can take from few hours to days, but it is always initiated very rapidly by the movement of ball-shaped gravity sensors. These balls constantly sediment at the bottom of the cell because they are very densely packed with starch. Therefore, any movement of these gravity sensing structures indicates a change of position with respect to gravity and triggers root bending. During this process, the lower part of the root stops growing, while growth at the upper part of the root is stimulated. The combination of these two processes induces the reorientation of root growth. This response requires a delicate communication between the cells that are on both sides of the root; a process that is orchestrated by the plant hormone auxin. Auxin is a small molecule with a very simple structure but that is able to impact virtually all aspects of the plant life. The large variety of auxin effects can be explained by its dose dependent action on cells and the fact that auxin is actively transported across the plants. During the gravitropic response, auxin accumulates at the lower side of the root where it instructs cell to stop growing. By contrast, auxin is depleted at the upper side of the root, which triggers cell elongation. Therefore, auxin asymmetric accumulation induces root bending to properly orient the root towards the gravity direction. Once bending occurs, the gravity sensors recover their original position and thus, auxin accumulation is reset to the pre-gravistimulation situation.

This seemingly simple mechanism is the result of a complex cascade that involves the synchronized action of a myriad of molecular players (sensors, messengers, transporters and growth remodelers), most of them still unknown. This mode of action is similar in other tropic growth responses, which provides a nice example of how plants have optimized their physiology to properly interact with their environment.