DNA transcription is a fundamental cellular process that allows gene expression through generation of messenger RNA molecules (mRNA) that are then translated into proteins in the cytoplasm of the cell. However when cells proliferate, another key cellular process, DNA replication, occurs simultaneously on the same template, leading to mechanical conflicts that can generate DNA damage. This can happen in particular upon unscheduled activation of DNA synthesis in cells induced by aberrant activation of an oncogene, or upon stalling of either machineries in front of natural obstacles and/or DNA damage, but also when ongoing transcription and replication forks travel in opposite directions (head-on collisions). How do cells deal with this uncomfortable and dangerous situation is currently unclear. 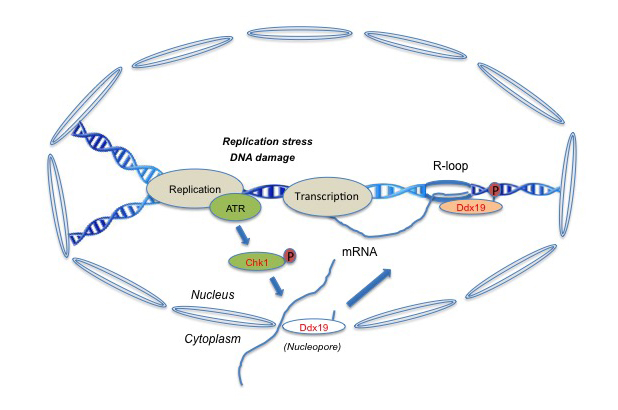 Fig. 1. Schematic representation showing Ddx19 function in R-loop resolution. Ddx19 is normally located to the nucleopore where it mediates mRNP remodelling during export from the nucleus towards the cytoplasm. Conflicts between DNA replication and DNA transcription that generate DNA damage, or DNA damage by itself, triggers activation of the DDR through the ATR-Chk1 pathway that results in Ddx19 phosphorylation. Upon its phosphorylation, Ddx19 dissociates from the nucleopore and translocates into the nucleus where it resolve R-loops.

One solution to this problem is the functional and structural compartmentalization of transcription and replication into sub nuclear structural compartments (replication and transcription factories). Nevertheless, these two processes will interfere at a certain point during the cell proliferation cycle. When transcription and replication conflicts arise, aberrant RNA:DNA hybrids, known as R-loops, accumulate on the transcription unit, where the nascent mRNA anneals back to its complementary DNA strand displacing a single-stranded DNA filament. Their persistence can generate a dangerous load of DNA damage such as DNA breaks that threaten the integrity of the genome. In the presence of DNA damage cells activate the DNA Damage Response pathway (DDR) which slows down proliferation and facilitates the repair of DNA lesions. If the DNA damage load is too high, then the DDR can eventually trigger cell death. In order to reduce this threat, cells have evolved enzyme able to remove these structures. These include ribonucleases, such as RNAseH, and DNA:RNA helicases, such as Senataxin. In a recent study, we have identified a novel DNA:RNA helicase involved in R-loop resolution, the Ddx19 RNA helicase. Ddx19 was previously identified as an important nuclear pore-associated RNA helicase, involved in remodelling messenger RNA ribonucleoparticles during mRNA export from the nucleus into the cytoplasm. We have now shown that Ddx19 is also functioning inside the nucleus in removing DNA/RNA hybrids (also known as R-loops). This new function of Ddx19 depends upon activation of the DDR mediated by the ATR kinase, a major sensor of replication fork progression. ATR activation, induced by reduced replication forks speed or pause (replication stress), leads to phosphorylation of the downstream kinase effector CHK1. This latter then in turn phosphorylates Ddx19. This posttranslational modification allows Ddx19 to dissociate from the nuclear pore and translocate into the nucleus to resolve R-loops. Accordingly, we have observed that a Ddx19 mutant that mimics phosphorylation is constitutively nuclear and is able to remove R-loops generated by inhibition of topoisomerase I by the chemotherapeutic agent camptothecin, while a Ddx19 mutant that cannot be phosphorylated does not translocate into the nucleus and is unable to remove R-loops. We have also shown a biochemical R-loop-resolving activity for Ddx19 in vitro using recombinant Ddx19 and artificial substrates that mimic an R-loop structure. Consistent with this finding, we have observed that knockdown of Ddx19 in cells leads to R-loops persistence and accumulation of DNA double strand breaks. Our findings suggest a model (Fig. 1) in which activation of the DDR transiently dissociates Ddx19 from the nucleopore to promote resolution of R-loops, so to remove this roadblock to the progression of transcription and replication on the DNA template and thereby facilitating the coordination of these two essential processes.