DNA explosions in the evolution of Hawaiian flies: consequences and questions

The chromosome set of each species carries the organism’s DNA sequences or genome. Genomes of higher organisms contain the essential coding DNA, plus the typically more abundant noncoding DNA. This segment carries various repeated DNA sequences. The transposable elements (TEs) that comprise one broad category are mobile, and consequently, interspersed throughout the genome, with tens to thousands of copies of each type. The highly repetitive or satellite DNA (satDNA), present in millions of copies of each sequence, is concentrated in large blocks of tandem repeats. These are mainly clustered in centromere regions of chromosomes, that orchestrate regular segregation of replicated chromosomes to daughter cells at cell division. These tandem repetitive sequences in centromeric and pericentromeric regions are tightly packaged, and microscopically distinctive due to their differential staining, being referred to as heterochromatin. Like the euchromatin, the heterochromatin is also interspersed with TEs, but at higher densities. 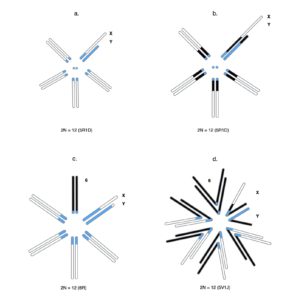 Like other groups endemic to Hawaii, the drosophilid fauna is the product of a spectacular evolutionary radiation from one common ancestor that colonized the Hawaiian Archipelago ~25 Mya. The ~1,000 extant species on the current high islands are all <5 Myr old, and display extraordinary morphological, behavioral and ecological diversity, despite their close genetic relationships.  Unexpected variation among these fly species in amounts and chromosomal distribution of heterochromatin (Fig. 1) piqued my interest, leading me to investigate their genome sizes and satDNA profiles.

Flow cytometry measurements of neural nuclei in a sample of 16 endemic Hawaiian Drosophila species from three different groups revealed a >2.3-fold range in haploid genome sizes from 0.175 picograms (171 Megabase pairs of DNA) to the huge 0.41 pg (401 Mb) genome of Drosophila cyrtoloma. This is the largest genome yet recorded in the genus Drosophila, and the whole family Drosophilidae.

Genome size increases have occurred independently and over evolutionarily short timescales in several lineages (Fig. 2). These DNA expansions reflect addition of blocks of heterochromatin to the species’ chromosomes. For example, evolution of the extraordinary 401 Mb genome of D. cyrtoloma entailed massive bursts of DNA proliferation, resulting in the addition of seven wholly heterochromatic chromosome arms (Fig. 1d) to the ancestral haploid chromosome set of six chromosomes (5 rods and one dot or microchromosome) observed in the 176 Mb genome of its close relative D. neoperkinsi (Fig. 1a), more than doubling the genome size. Most of this explosive DNA amplification occurred within the last 0.6 + 0.05 Myr, the time since the last common ancestor of D. cyrtoloma with its sister species D. melanocephala (Fig. 2).

The microchromosome has frequently undergone heterochromatin expansion, on a minor scale to yield large dots, or on a more massive scale to produce a long rod chromosome (6R; Fig. 1c) or even a two-armed chromosome (Fig. 1d). The X- and Y-chromosomes, also enriched in repetitive DNA sequences, have likewise undergone frequent evolutionary expansions. In these Hawaiian flies, the major contributor to genome size increases is satDNA amplification, as shown by the significant correlation between satDNA proportion (determined via cesium chloride density ultracentrifugation) and genome size. About 70% of the gigantic D. cyrtoloma genome is satDNA!

Why do Hawaiian flies generally have larger genomes than non-Hawaiian members of the genus Drosophila?  Is there a similar pattern in other groups of Hawaiian animals and plants? What is the effect of the extra genomic DNA at the cellular and organismic levels, and longer-term evolutionary consequences? What triggers bursts of satDNA amplification, and in some cases, a veritable explosion of repetitive DNA, resulting in longer chromosomes, more heterochromatin, and larger genomes? Might volcanic stress-induced transposition bursts of TEs embedded among satDNA repeats play a role?