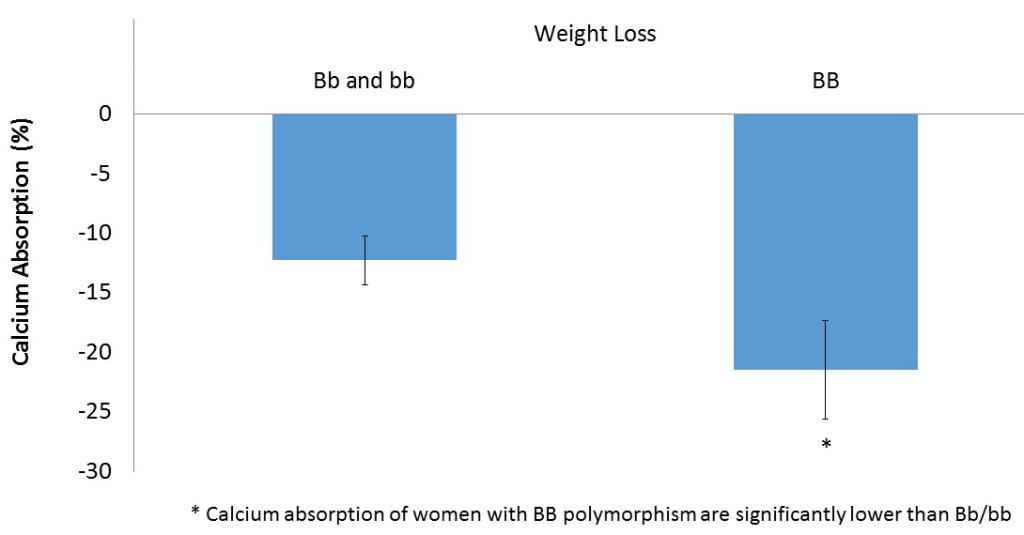 In this study, we found no effect of the ESR1 polymorphisms on calcium absorption, but that a particular polymorphism “BB” of the VDR genotype (Bsm1) was associated with lower calcium absorption compared to the “Bb” and “bb” genotypes during weight loss. A previous study found that the same VDR genotype was associated with lower calcium absorption in individuals with low calcium intake, suggesting that the BB genotype may predispose individuals to low calcium absorption in the setting of dietary stress. In other words, if an individual consumes the recommended intake of calcium (i.e. ~1g/day), his/her VDR genotype will not influence his/her ability to absorb calcium. However, when one’s calcium intake is low or calories are restricted without adequate dietary calcium, his/her calcium balance will be compromised in the presence of the BB genotype. A solution is to recommend at least 1 g Ca/day, especially to those individuals who are dieting.

Overall, this work underscores the importance of using both a genetic and metabolic profile to define at-risk populations and improve disease prevention with personalized nutrition and medical care.