The common edible crabs which we often encounter in land, sea and freshwater bodies mostly belong to a group classified as brachyuran crabs. They constitute a third of the commercial value of Indian seafood. There are about 6559 crab species known world wide so far, of which ~990  are known from Indian waters. The number of species reported from the Tamil Nadu coast, southern India, are 404, of which, 103 species are known along Chennai coast. Among the families of crab, the family Corystidae is regarded as one of the oldest brachyuran families and can be traced back to the Jurassic Period. 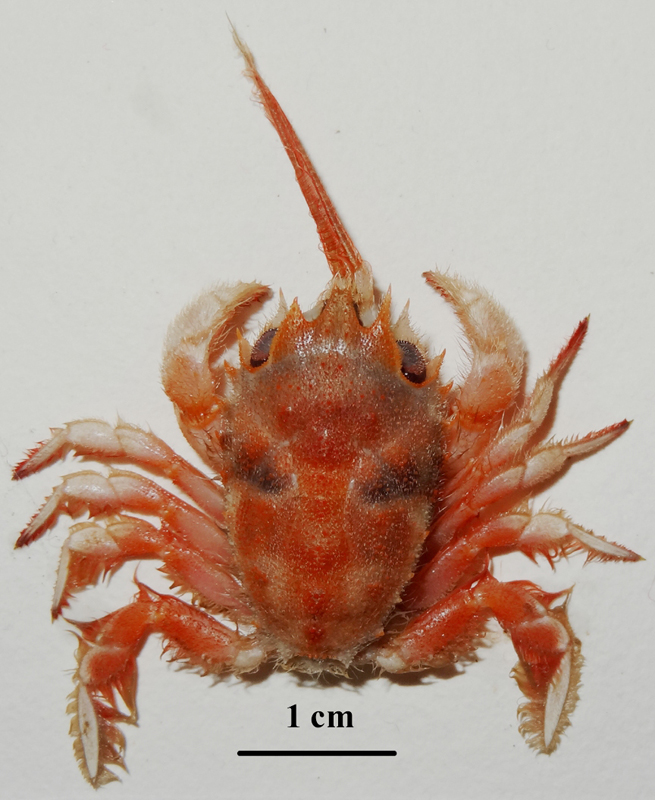 They are small in size and are characterized by the presence of a long respiratory tube formed by modified antennae. These long tubular antennae help them breath while hiding under sea bed sand. They are often known as masked crabs or sand crabs because of their dorsal appearance and habitats, respectively. These are often found buried completely in the sand and are rarely caught. Because of their small size and infrequent catch in trawls, these crabs have little commercial value. Two species belonging to the family Corystidae have so far been reported from Indian waters, namely, Jonas indicus from the mouth of Hooghly River and later from Chennai coast, and Jonas choprai, from the Parangipettai coast, south of Chennai. Another new species of Jonas was discovered from Kalpakkam, 50 km south of Chennai.

This new species is named Jonas kalpakkamensis signifying the location of its discovery. The specimens were collected from muddy sand substrates in shallow coastal water of Kalpakkam, within a depth of 20-30 m. The masked crab burrows backwards into the sand. Once it is in the sand, the crab forms a tube by fusing the bristles of the second pair of antennae together; it then draws water down through this tube for respiration. It feeds on burrowing invertebrates, such as polychaete worms and bivalve mollusks. Prior to this, 6 species belonging to Jonas genera were known from the world. The genus has distribution in Indo-Pacific region, extending from Japan to Australia in western Pacific and also has been reported from Bay of Bengal and Gulf of Oman in Indian oceanic region.

Out of the seven species, three (including the present one) have been reported from India. Considering the fact that only seven species of the sand crab are known worldwide, indicates its rarity. As these species are small and hideous in nature, are caught less in fishing net, hence have less economic importance.  Due to their rarity and less economic value the studies regarding their diversity and ecological status is scarce. Hence, there is a need for more efforts in this regard to document the biological diversity, understanding habitat conditions, threats and endemicity of this rare crab.