Human immunodeficiency virus type-1 (HIV) enters the brain during the initial stages of infection and can cause neurologic dysfunction. Despite the success of HIV treatment through combination antiretroviral therapy (ART), impaired neurocognitive function remains an important problem for persons living with HIV. HIV is unable to infect neurons but viral proteins such as the envelope glycoprotein (gp120) and the transactivating protein (Tat), can be released from infected cells, predominantly macrophages and microglia, and enter neurons causing neuron dysfunction. These viral proteins represent an important contributor to neurotoxicity (Fig. 1). 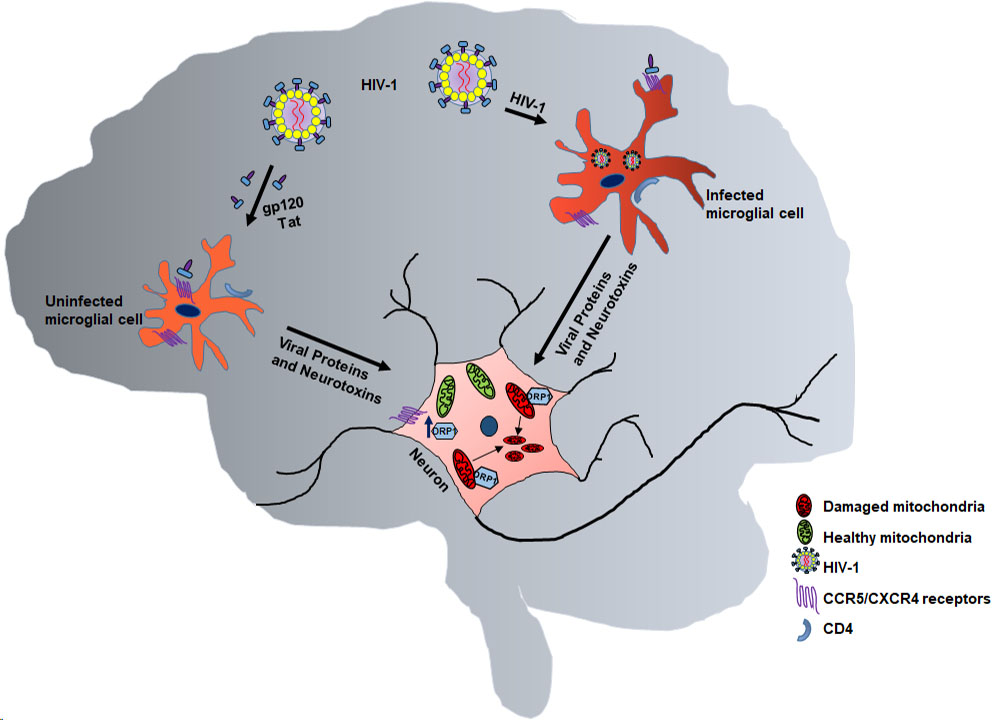 Autophagy, a key homeostatic process, plays a major role in cellular survival. Autophagy or “self-eating” is a cell renewal process in which cytosolic structures are degraded and eliminated through lysosomes. Lysosomes are acidic organelles that break down cellular components, and can eliminate viruses and bacteria. Autophagy can be non-selective or selective in elimination of specific organelles like mitochondria. Neuronal health is also dependent on the functional integrity of mitochondria. Mitochondria represent the “power house” of the cell. To maintain healthy mitochondria, cells need to remove old and damaged organelles. Mitochondria maintain a dynamic network within cells and participate in fission (fragmentation) and fusion (merging) events in order to maintain their distribution, size and shape. Damaged mitochondria are subjected to mitochondrial regulatory mechanisms and eliminated through mitophagy (mitochondria specific autophagy). We hypothesized that mitophagy in neurons plays a significant role in HIV-associated neurocognitive disorders (HAND) and that HIV gp120 and Tat proteins would dysregulate mitophagy. We show that treatment of human primary neurons (HPNs) to viral proteins induces mitochondrial damage and fragmentation. Whereas healthy cells maintain a tubular arrangement of mitochondria with a “hair-like” morphology, when HIV proteins are internalized by HPNs there is marked perinuclear mitochondrial aggregation and fragmentation (Fig. 2). 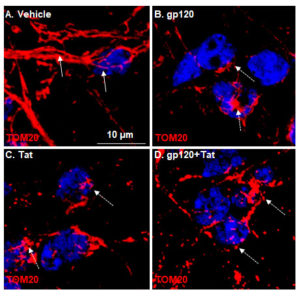 The elimination of damaged mitochondria is coordinated by asymmetric fragmentation that is regulated by dynamin-related protein 1 (DRP1), a key molecule that is translocated from cytosol to damaged mitochondria and ultimately broken down in lysosomes containing degradative enzymes. However, we discovered that although when HIV proteins enter neurons the translocation of mitophagy-related proteins to injured mitochondria occurs, the transfer of mitochondria to lysosomes is impaired. Furthermore, we found that HIV viral proteins prevent mitophagy from going to completion in neurons. Additionally, HIV gp120 and Tat mediated mitochondrial damage and reduced mitochondrial membrane potential ((ΔΨm). When dysfunctional mitochondria are not removed efficiently due to impaired mitophagy, neuronal cells increase oxidative stress, ROS production and neuroinflammation. Therefore, dysregulated mitophagy can contribute to the progression of HAND and advanced aging linked to HIV infection. These findings support an important role of mitophagy in HAND and provide novel molecular targets for new therapeutic strategies and clinical interventions.