An inborn genetic defect can be found prenatally or postnatally. The best known and most frequently observed reason for such developmental delay and/or mental retardation is Down-syndrome, also known as trisomy 21. I.e. besides the normally present 46 human chromosomes (each chromosome in two copies – Fig. 1A), in Down-syndrome a third copy of chromosome 21 is present in each cell of the affected person (Fig. 1B). However, besides trisomy 21 there are multiple other possible causes of an idiopathic clinical problem of an (unborn) child. 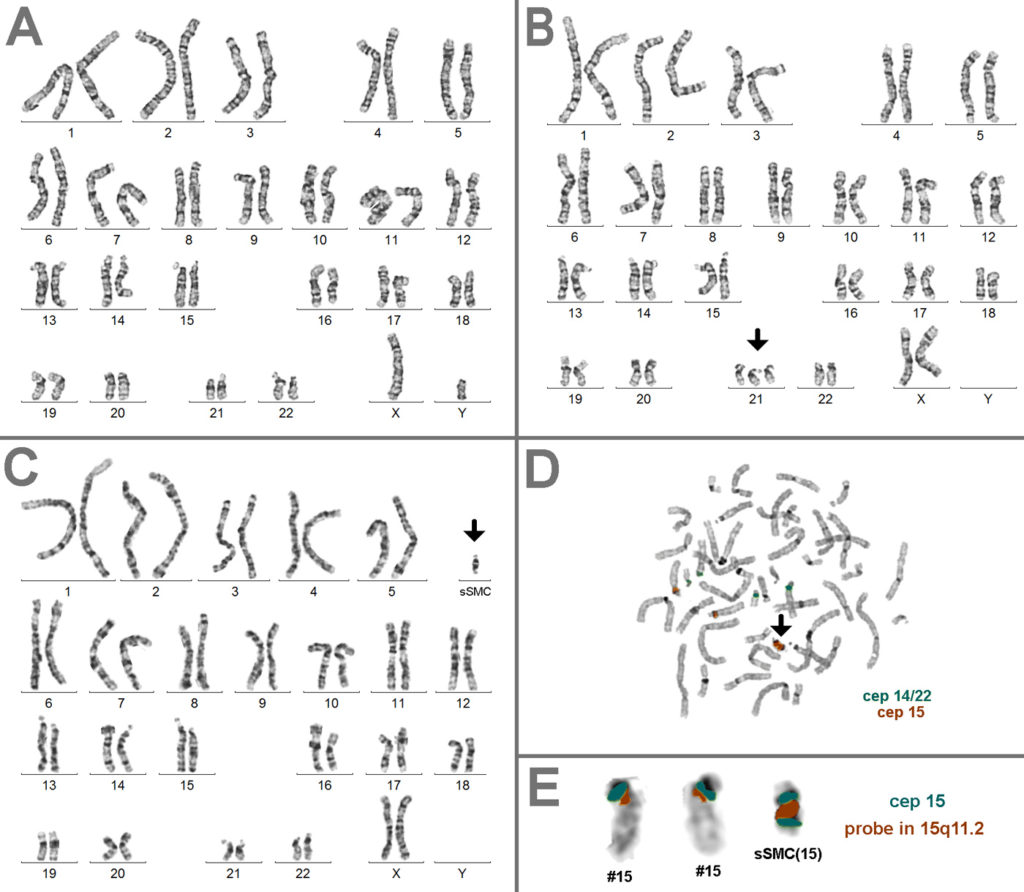 Fig. 1. Results of chromosome banding analyses (A-C) and fluorescence in situ hybridization (FISH) analyses (D-E) are shown. A) Chromosome banding from peripheral blood cells revealed a normal male karyotype. B) Chromosome banding from peripheral blood cells identified a third copy of a chromosome 21 (black arrow), being indicative for Down syndrome in this female patient. C) In this female infertile patient a small supernumerary marker chromosome (sSMC) was found (black arrow). Due to its shape it was most likely to be derived from #15, #22, #14, #13 or #21. D) The sSMC of the patient from Fig. C was characterized here by centromeric probes for chromosomes 15 (cep15) and 14/22 (cep 14/22). Two signals indicating for chromosome 15 origin are present on the sSMC (black arrow). E) FISH applying a probe in the gene-containing region in 15q11.2 revealed that this sSMC(15) can be cytogenetically reported as inv dup(15)(q11.2).

Three million people worldwide have another kind of such a chromosomal abnormality; they are summarized as carriers of a so-called small supernumerary marker chromosome (sSMC). An sSMC is, similar like in Down-syndrome the third chromosome 21, present additionally to a normal content of 46 chromosomes (Fig. 1C). In contrast to Down-syndrome, the additional sSMC can derive from each of the 24 human chromosomes, can have different shapes, sizes and genetic content. About 1/3 of sSMC are inherited either from mother (~22%) or father (~11%) and can be transmitted further to own children. The clinical picture connected with sSMC presence is very variable. Luckily the majority, i.e. 2/3 of the sSMC carriers has no clinical problems due to the 47th derivative chromosome. Nonetheless, the sSMC may go together with reduced fertility or even infertility. The remainder 1/3 of sSMC carriers shows mild to severe clinical signs and symptoms. Thus, especially infertile sSMC carriers and such with clinical problems due to an sSMC are interested in a straightforward characterization of the sSMCs genetic content.

Presence of an sSMC is most often recognized during chromosomal banding analyses (Fig1. 1A-C). Based on that the following information may be gathered: (i) there is an sSMC either in all studied cells, or only in a part of the cells (i.e. there is a mosaic of cells with sSMC and such cells without sSMC); (ii) in ~70% of the cases the sSMC shape is very specific (technical term: inverted duplicated shape) and thus the origin of the sSMC is either from chromosome #15, #22, #14, #13 or #21; (iii) a parental analyses using chromosomal banding analyses may answer the question for familiarity of the sSMC. From this starting point of sSMC identification three major approaches are available to characterize the origin and genetic content of an sSMC.

(1) The first approach, called molecular karyotyping, also referred to as array-comparative genomic hybridization (aCGH), is highly advertised for all genomic imbalances as present. Still for sSMC characterization it has following shortcuts: aCGH can only detect reliably chromosomal gain or loss if the aberration is present in >30-50% of the studies cells. sSMC are mosaic in ~50% of the cases; i.e. there are at least 10% of cases, with an sSMC being present in less than 30% of the cells of the carrier. Besides, aCGH cannot detect repetitive DNA, as present in centromeres of all human chromosomes including the sSMC. At least 25% of sSMC consist almost exclusively of such material not to be detected by aCGH. In conclusion at least 30-35% of sSMC cases cannot be resolved by aCGh due to technical reasons. (2) The second modern approach for high resolution studies of the human genome is ‘next-generation-sequencing’ – still no single sSMC cases has yet been published to be characterized by one of these so-called ‘high throughput methods’. Detection principally is possible by this approach, still the costs and turnaround time are at least at present not able to compete economically with others in this specific question.

(3) Thus, still the only reliable approach being able to characterize sSMC being present in mosaic and/or containing centromeric material, is the molecular cytogenetic approach called fluorescence in situ hybridization (FISH). By FISH the chromosomal origin can be characterized in one step and the chromosomal content of the sSMC in a second step (Fig. 1D-E). All this can be done for reasonable costs, and in a reasonable time frame, i.e. on average within 2-4 working days. The latter is especially important in prenatal cases, as here the parents want to know about the possible clinical consequences of the sSMC, which can only be suggested after being able to compare the well characterized specific actual case with previously published ones. The latter is possible on http://ssmc-tl.com/sSMC.html.