In vivo imaging of the lung inflammatory response to Pseudomonas aeruginosa

Chronic inflammation of the airways is a central component in lung diseases and is frequently associated with bacterial infections. Monitoring the pro-inflammatory capability of bacterial virulence factors in vivo is challenging and usually requires invasive methods. The issue is that not all bacteria strains might have the same capability to induce a inflammatory response in the lung and that it is obviously not possible to test this issue in human models. We therefore decided to utilize a murine model developed by our group consisting of a biosensor made of a regulatory element taken from a gene known to be activated by pro-inflammatory stimuli in humans (IL-8 promoter, the regulatory sequence of a gene essential for leukocytes recruitment to the inflamed tissue) and deliver it in the cells lining the lung of mice. The biosensor necessary to ensure its necessary entrance in the lung epithelial cells is delivered to the mice by a simple venipuncture. The mice thus absorb the transgene and host it in the lungs, ready to be activated when triggered by a chemical administered by intraperitoneal injection of the substrate for the product of the biosensor that is produced when the gene is activated, a condition that occurs only when a pro-inflammatory condition is present in the lung. This response can be tested multiple times for up to three months from injection by measuring the bioluminescence produced using a super-sensitive camera. Mice are anesthetized and the procedure is non invasive thus ensuring the possibility to reduce the number of mice that need to be euthanized for analysis and to test the same mice multiple times reducing the experimental errors associated to variability within the experimental model.

We have then tested our selected two bacteria strains isolated form CF patients releasing different amount of a series of potential pro-inflammatory factors in vitro and tested whether these differences could be detectable in vivo using this murine model.

The antibiotic azithromycin (AZM) is widely used by patients affected by cystic fibrosis for its clinical benefits, although mechanisms are unclear. By in vivo monitoring of lung inflammation induced by Pseudomonas aeruginosa released factors we have demonstrated for the first time in this murine model that this antibiotic is indeed capable to reduce the synthesis of bacterial factors involved in bacteria pathogenicity. This suggest (but do not yet prove) that the clinical benefits associated to AZM treatment in CF patients might be at least in part due to the lowering of the exoproduct synthesis induced by the antibiotic in bacterial cells. 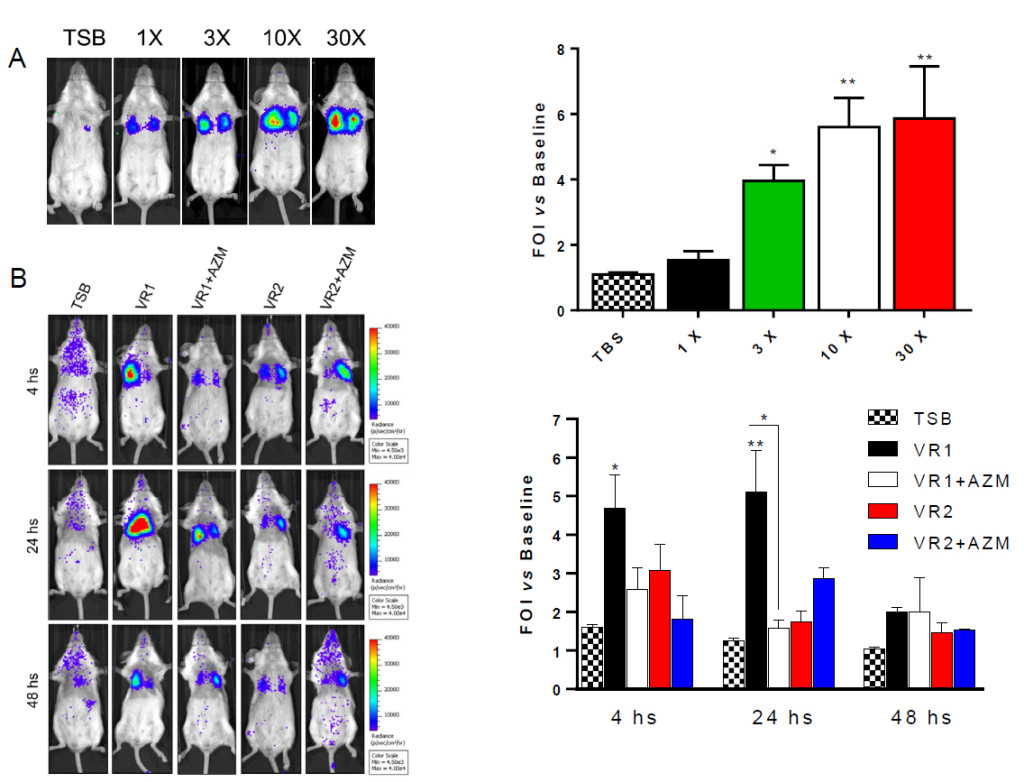 In conclusion we provide data supporting the use of this approach as an appropriate read-out for monitoring the activation of inflammatory pathways caused by bacterial virulence factors. The data presented indicate that the model is suitable to functionally monitor in real time the lung inflammatory response facilitating the identification of bacterial factors with pro-inflammatory activity and the evaluation of the anti-inflammatory activity of old and new molecules for therapeutic use.